No, not baseball. This is way more exciting than baseball. Everyone wants to know what to do to stay in shape through the winter, or to ramp up training in the spring so they can be ready for whatever ambitious climbs they’ve been dreaming about for 6 months. I have never hiked Mailbox or Si or Cable Line for conditioning because like many others, I go to the mountains to escape, and those trails have a lot of traffic. While slogging up Granite a while ago, I had a moment of clarity where I realized what works best for me (which probably means delirium had set in from exhaustion). Here are my general guidelines.

1) Don’t get out of shape. But who are we kidding. I like egg nog and you like hot chocolate and we both like rumchata and ever since I discovered you can mix them all together my  standard diet has gotten out of hand. So this is a fake #1. 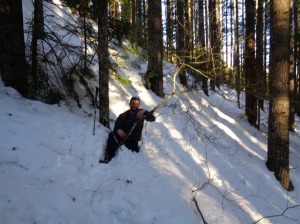 1) Ditch the snowshoes. They’re impeding your progress to Greek body glory and double Rainier summits and one day multi peak slams. Pushing through thigh deep powder on a 30 degree slope will burn like 200 calories per step (non-scientific estimation). Offer to always break trail for your friends, unless they’re in way better shape than you and need something to slow them down (cough, JT). Just remember to step carefully when you turn off of a well packed trail or you’ll faceplant immediately, which may provide comic relief to your equally exhausted trailbreaking friends, but will not help you.

Why would I skin all of this? (Hidden Lake Lookout, recommended winter summit) 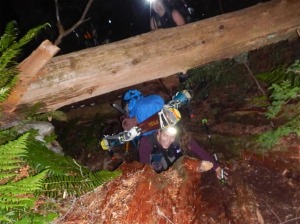 “Logs of Sorrow” aka a great core, butt, balance, and don’t-cry workout (Eldorado)

2) Pick up skiing, but don’t actually learn how to ski. Or splitboarding, but again, don’t really ace it. Obviously, this is why I’m still bad at skiing. Make sure your ski/snowboard boots are uncomfortable enough that you always carry approach shoes, mountaineering boots, and the ski/splitboarding boots. And throw in some down booties because your ski boot liners will start to smell like death so you shouldn’t wear those in the tent or in the lookout. And overpack every time. Between carrying the skis, extra food, extra puffies, down booties, the ten essentials, I don’t know, some beer, it’ll add up.

Look how happy I am!! It’s because I thought we had 10 essentials and would be down in an hour! (Cutthroat)

3) Forget at least 2 of the 10 essentials. Now I know this may cut down your training weight, but it increases the chances that you will be stranded and moving through the night, or unreasonably cold and therefore burning more calories via shivering, or expending calories melting snow with your body heat, or not eating enough fuel in general. Okay forget the second one, bring enough layers. No one likes being cold. Maybe make your friends forget the essentials and you can be the hero with effectively the same results.*

4) Mentally resign yourself to turning around all the time. Part of getting in shape for mountaineering is mental, and this is your mental training. You aren’t going to summit on those winter snow plow trips. If you do, it’s an added bonus. But this isn’t about the summit. This is about slogging and suffering and getting dehydrated and cranky and impatient and testing your friendships and climbing compatibility because no one likes climbing with assholes unless they’re snarky and hilarious. 70% of mountaineering is being generally uncomfortable for extended periods of time, and that’s part of training. The boring, tedious, yet somehow exhausting slog. And if you get used to turning around now, it’s easier to turn around in the summer too.

Wow, look how not even close we are after six hours of agony!!! (Baring)

5) Round up your good friends to join you. I have several who have seen me at rock bottom. Tony, while I was facedown on the Colchuck trail clothesline-carrying my skis after taking a tree to the face. Tony when I snapped that no, he may not make coffee after a night stuck out on Cutthroat because it’s 8am on a Monday and I need to get to work. Tony when I made it to Winchester Lookout at 5am after a 11pm start and asked that he take pics of sunrise for me before deciding I was being wimpy.

Psych! You’re gonna get lost and lose your hat bushwacking for the next 9 hours because all of your nav stuff died and why would you bring a compass?! (Snowfield)

Okay, so mostly Tony. But Sam’s had his moments (me, staring blankly at an impassable downed log when we got lost on the way down from Snowfield) and JT (also bushwacking down from Snowfield, or crawling back from Formidable), and Kacie who realized that any time I’m being extra nice it means I’m 9/10 pissed and Cheryl who combined with Simon and whiskey makes anything funny and Calvin who will never forget the one goddamn time I didn’t bring a headlamp and taught me many new versions of the f bomb. Who’d I leave out?! You’re probably in the lucky bunch. Point is, you need to make sure you have a good crew, otherwise you’ll be ass deep in posthole with your foot stuck under a branch falling downhill because your skis make your overnight pack too heavy and you can’t sit up while you wonder why anyone does this shit for fun and why the world has betrayed you.

Bonus: turn the heat off in your apartment. You’ll save money, and prep your body for cold weather. It’s called “cold training.” 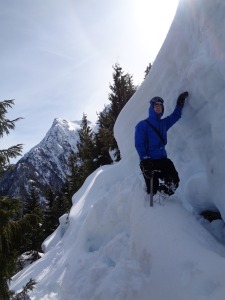 Why go around… when you could go through? (Colonial)

Another bonus: Have your roommate/SO/kids/dog eat all the junk food. That way you aren’t being wasteful, but you also aren’t eating it yourself, and you seem like a nice person.

You can also be normal and go for runs, or load up a pack and hop on the stairmaster if it’s gross outside (or if you live in the flat half of America), or lift weights. Squats and lunges, buns and thighs! Cardio helps, but a lot of mountaineering is power muscles. Cooking? Warrior II while that sauce simmers, sunrise salutation while the pot boils. Doing laundry? Carry both loads up and down the stairs at once, don’t take two trips. Wash your sheets more often. Oh, you have in-unit laundry? Great, escape the lap of luxury and help me carry mine you spoiled bum. Binge watching Westworld or Stranger Things or whatever the cool folks are marathoning? 8 minute abs! Put the beer down, you know if you have three of those then you’ll end up eating the cheetos in the cabinet that you didn’t offer your roommate in the bonus step.** 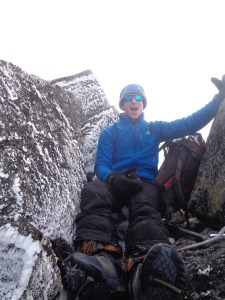 The fog cleared for a miraculous 15 seconds, long enough for the real summit to say “ha, suckers!” as we sat on the wrong summit (Cashmere)

Basically, do anything. Anything is better than sitting at your desk for 10 hours straight and then going home to sit on the couch no, I’m going for a walk, and now I have  okay, dozens of readers to hold me accountable. Doing laps on Si or Mailbox or Cable Line is fantastic if you have enough breath and patience to stop every few minutes to talk to hikers on their way down. Stuck in the city? Go hit up Denny or Queen Anne Hill or jog up and that hill downtown between Alaskan Way and 2nd and laugh at everyone who can’t do hill starts in their cars.

And fine, just because there has to be something useful in this post, here are my personal top 10 get-in-shape hikes for spring and early summer. That means elevation gain, baby! None are tougher than a class 2-3 scramble, snow level varies but hey you’re going to be mountaineering so you better get comfortable with those boots and that ice axe. And just for the record, self arresting with a 50lb pack on is a hell of a lot harder than when you’re wearing nothing. Practice it, you’ll get a nice ab workout and feel like you got hit by a bus the next morning.
I’m going to put these in roughly seasonal order depending on when you can start them. Some are dependent on snow melting. Hibox and Pugh will likely not be fair game until July, but most guided summits are June, July, and August, so I was lenient and gave them a spot. I wanted to break the mold from the usual recommendations and get a bit more adventurous.
*disclaimer: all of these have avvy danger. You’re in the alpine in the winter on fresh snow. Be smart.
FIVE!! trails get Honorable Mention, because I haven’t done them personally but I know they’re awesome: 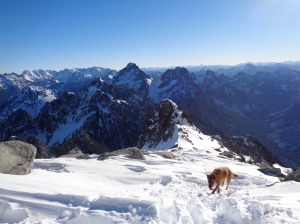 She’s better at climbing than I am (Vesper)

And these three are trips I didn’t blog about, but are good to practice off trail navigation and wallowing in forested powder in the dead of winter (like December and January). These are all below tree level, which helps a bit with avvy risk. Oh, and no snowshoes allowed. If your friend brings snowshoes and the other 3 of you are booting it, steal his snowshoes and whack him with them and cast them away from thyself. Haven’t we been over this?

Finally, here’s a link to one of the best winter resources, the Mountaineers’ list of winter summits. Don’t look for what days they’re doing which climbs on their website, because then their massive 12 person groups will have broken all of the trail and that violates rule #1. You. Always. Break. Trail. Stop. Whining.

One of my friends made a facebook post earlier today about losing weight, and my friend AJ had my favorite advice on there. “Just keep pushing, every day. The scale is useless, what did a scale ever do for anyone? Just do do do and go go go and wake up one day five months from now and ask yourself how you feel.” Because that’s what getting in shape is. It’s waking up after 5 months of slogging, grinding, feeling shitty, and thinking hey, I feel pretty strong today. You don’t notice it on day 3, or on day 8, or even on day 30 if all you’re doing is comparing day to day. And that’s how my spring training is. Get in a routine, space out, every weekend is physically punishing, but then June comes around and I think whoa, I can do some pretty cool things pretty easily.

Now start dreaming and savor the 10pm motivation that you’ll probably have forgotten about by 8am tomorrow!
*Guys don’t actually do this
**Owen there are not actually cheetos in the cabinet but go do some work on those damn girl scout cookies

One of many stunningly beautiful turnaround points (Black Peak)