JT coming up the final ridge

Also known as “A Great Reminder That I Don’t Actually Know How To Ski.” But eff it, I’m sure as hell gonna try. Day one of a two-day Stevens Pass extravaganza, we bailed on our Plan A (late start, questionable forest road conditions) and drove towards Stevens Pass from Leavenworth trying to brainstorm ideas that didn’t involve 3 miles of road walking. And then Robert and JT spotted a peak off the highway. “What is that? What peak is that? Look up what that is. We should go up to that bowl. LOOK at that white skiiable bowl.” “Uhhhh I think that’s Rock Mountain. Yeah we could do Rock Mountain, it’s part of a good ski traverse.” I groaned because I had done Rock Mountain in fall and wasn’t feeling particularly motivated to go back. But it’s supposed to be a good ski. “Is there a road walk?” “Maybe like a quarter mile of road?” “But look at that snow up there. So many lines.” “We could even bag extra peaks on the traverse!” “Guys should we do Rock Mountain? Guys look at that white bowl up high.” “Where’s the trailhead? That’s the trailhead!?” “Yep no WAIT AHH TURN AROUND we’re doing Rock Mountain.” And so, we skiied Rock Mountain on 2/10/2018.

We got started up just after 9am. The road was skinnable (the road is like a 15 minute section, not even) but once you hit the turn off for the real trail we had to pack the skis because the snow was patchy and thin and still mostly frozen, especially in the trees. This was okay with me, because you know how good I am at skiing (not good). Guys I’m going to warn you now that there are way more photos than words in this blog post, because I couldn’t stop taking pictures. It was. Freaking. Gorgeous. 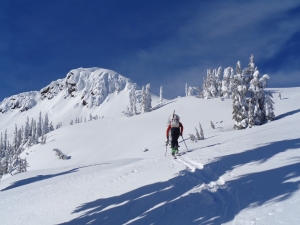 Skinning towards the false summit

It’s February, right? I thought we’d be freezing so I started out in a puffy, a sweater, and an expedidtion weight baselayer. Within the first hour we stopped probably three times to delayer. It was a casual day and JT and I had not paid attention to layers and I was sweating balls within a half hour. “Be Bold Start Cold” only applies on serious trips. I’m going for comfort on mellow days. I will start warm and de layer as necessary. Robert, on the other hand, totally nailed it and I don’t think changed even once.

Arrowhead Mountain looked enormous across the highway as we gained elevation through sparse trees. Man, we should do that one someday. That’s the best part of starting near the passes, you start high and often don’t have to spend much time in the forest. Alternatively, you can do a hike off highway 20, where you’ll gain like 4,000ft of elevation before breaking above the trees. Yuck. 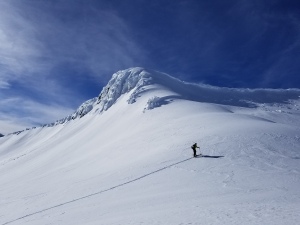 I wouldn’t tell Robert or JT how far we were the first few times I checked the map, because we were making hilariously slow progress. To the point where I wasn’t sure we’d make the summit. The first 2,200ft of elevation gain are straight up in the first ~1 mile or so, and then you break out onto a narrow but mellow southeast ridge winding between trees with sneak peeks of the false and true summits of Rock Mountain and Mount Mastiff. The texture of the surrounding ridgelines with cornices and steep fluted snow through trees was unreal. You could see an old slab avalanche crown, and debris where cornices had collapsed in the bowls in the distance. The snow up here was an inch of windblown powder sparkling on top of crust, and it was easy skinning as we broke above tree line and realized just how close to the summit we actually were.

Robert skirting cornices and rime-frosted bushes along the final ridge

Looking back at the true summit from the ridge

I go crazy once we’re above tree line. Below the trees I’m steady, maybe even slow and grumpy. But then we break out into the alpine and everything is right with the world and everything is beautiful and look where we are and everything is amazing and that’s how this was. I wanted to touch everything. Run everywhere. I wanted to traverse the whole ridge. You can traverse over to Mastiff and Howard and oh man we should have gone faster through the forest we could totally tag all of these or what if we had camped up here what were we thinking!! But we wanted to be back down in time to meet Kristen for Saturday dinner and Sunday adventure, so we just focused on Rock Mountain. And remember Arrowhead Mountain looking so imposing on the way up? Now we were looking down on it.

We skinned up mellow rolling hills gazing up an an east-oriented ridge that would take us to the final south ridge to the summit. I thought I remembered that what we were looking at was actually the false summit but didn’t say anything until we were already on our way up it. The trees were covered in rime ice and the hoar frost was sparkling and the varying snow textures against blue sky were just outrageous. JT skiied back down to Robert to see if he wanted to summit (yes, with a disclaimer of “but everything hurts and I hate this sport and whose idea was this”) and we took off for the final ridge. I was bummed to not be the ones breaking trail up through the pristine snow, but it was nice to save some energy for the miserable posthole down. I stashed the skis knowing I had no chance of skiing the steeper snow still icy in the shade, plus everyone was booting up anyway so there was already a staircase built into the face. “Eve, you forgot something!” Rob shouted up to me. “You wanna carry them up here?!” I laughed. He wasn’t gonna bring them up. And if he did, I’d just insist on a classic Eve shot of me carrying my skis down instead of the other way around. 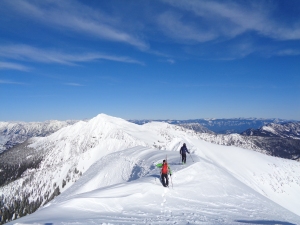 Looking NW at Mastiff and Howard

We crested the south ridge and gazed along cornices to the true summit. I jogged to catch up with JT after snapping a few pictures of the otherworldly rime-covered bushes dotting the southwest face of the ridge. Some of the cornices were cracking, but they weren’t huge and the snow had been bulletproof thus far. I did punch through into a sneaky tree well (bush well?) on my way along the ridge, happily jogging until BAM facedown, dumbass. It’s amazing how this was such an easy, normal hike in the fall, yet in winter it turns into a beautiful fluted alpine-feeling objective. We reached the summit and I took 5.62486*10^11 photos of our surroundings. Panoramextravaganza Part II, I didn’t know which direction would make the best pano and obviously none of the photos will ever do it justice. But after months of being cooped up inside, running in the rain, skiing at resorts, driving all the way to the Yakima grasslansd and canyons for sunshine… oh man, days like this make it all worth it. Why do we do it!? For the views! 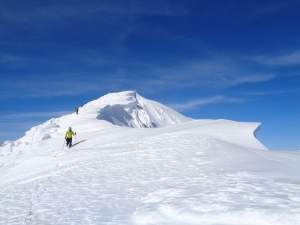 The other party on their way down

We high fived, had snacks, someone peed off the top (hint: not me), and JT clicked into his skis to practice his rime technique while Rob and I booted back to the false summit. We lamented the addiction to mountaineering, skiing, climbing, the alpine, whatever you want to call it. I love every second of it and was on top of the world. But that’s not always how it is. Sometimes you’re getting out because you have to, not because you’re loving it. But this weekend for me was like a Ruth’s Chris steak dinner. Every piece was delicious and I want to relive every second.

I booted partway down the slope to get sweet pics of my more capable friends, Rob set up his splitboard in under an hour which was a new splitboard transition world record, and we were off! Or, they were off. I got dope photos, walked back to my skis, and skiied the like 4 degree incline back to the ridge where I immediately got spooked by the double-sided-drop and trees. I can dodge a drop, I can dodge trees, but dodging trees AND a drop…. ahhh that’s asking a lot. So instead, I chose postholes and shin bruises and glissading like a boss.

Robert boarding down below Rock Peak 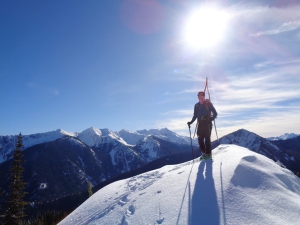 JT on the low ridge, Chiwaukums back left

And by glissading like a “boss,” I mean “ endearing nerd trying to keep up with the cool kids.” I didn’t get too far behind, turns out JT and Robert are patient people which I appreciate. We made it back to the car in around 2.5 hours (took us 5 hours car to summit). JT skiied all the way back to the highway. Robert boarded until maybe the last 800 vertical feet. Like I said, I postholed, stumbled, jogged, and eventually gave up and strapped my skis horizontally on my pack and used my ass to transport me the rest of the way down managing to not clothesline anyone (or myself) with my horizontal skis.

Cornices and shadows in front of the Chiwaukums

Rock Mountain is an amazing ski. You gotta get up there. Snowshoers supposedly do it too, but the only snowshoe tracks we saw only made it like 1,000ft up before bailing. It’s really not that bad especially if the snow is crisp in the morning and you can boot up quickly, I imagine it’s more of a pain in the ass when it’s soft. But wow, we’ll definitely be back to this area. I want to get the full traverse. JT and Robert want to ski/board the steeper gullies leading back to the road. JT could ski through those rime-wrapped bushes on the west face of the south ridge, ahhh. It’s a playground for adults. You could camp up there and just do laps in that bowl all day.

Share what you live for, right? Well I live for days like these. I’ll holy out through weeks of rain for one weekend like this. Doesn’t matter that I can’t ski it all yet, I’ll get there. And in the meantime, I’ll take pictures of my bad ass friends doing bad ass things. Awesome day, guys. Can’t wait to go back for the rest of that traverse. And for those Chiwaukums taunting us in the background.

One more of that freaking ridiculous ridge. Chiwaukums back left, Stuart just barely peeking out behind them.