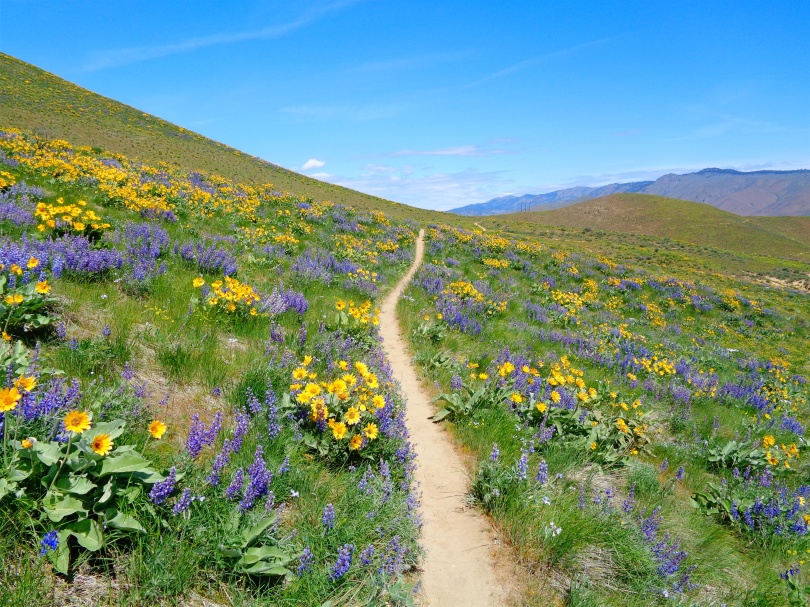 Sage Hills, the best wildflowers I think I’ve ever seen 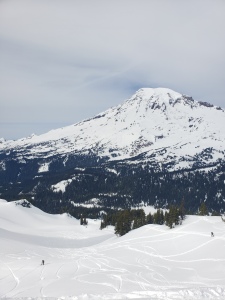 The view skiing from Castle

Three months ago, I stumbled upon a Reddit headline that just said “half-assed is better than no ass at all.” Funny, because about two weeks prior I had come to the same conclusion. My work life balance was in the toilet, I was unhappy with my team, my team’s direction, my daily duties, and mostly the fact I had to be available to monitor shit on weekends. I was not important enough to the company to be full time and yet I was important enough to manage this test day in day out. And yes, it’s only ~two hours of work on Saturday, but an hour in the morning and an hour in the evening means any overnight climbing trip is shot. I have always been very good about drawing lines between work and personal life, and somehow everything I had always worked to fight against was suddenly happening and I was just sitting there and taking it.

And then after a day doing the Table Mountain Circumnav, I decided that you know what, a half day trip was better than nothing. Maybe I didn’t get my winter Rainier ascent, Chiwaukums traverse, Baker ski. Maybe I wouldn’t be fit enough to leave town to do a last minute ultramarathon for my birthday like last year. Maybe I wouldn’t get to trailhead camp Friday nights and do long day trips from 3am to 10pm and stay in lookouts and ski in the middle of nowhere two days in a row but that doesn’t mean I should spend the entire weekend in town ignoring everything I love to do. And so, the short trips started.

Here’s where I got lucky. I actually had a few friends in similar situations. They could only get out one day a weekend. Or they wanted to just go to the ski resort. Or they were new to backcountry skiing and just wanted a couple hours playing around on their new setups. The Rainier National Park gates helped me out too, they don’t open until 9 so if I found someone to go to Paradise or the Tatoosh then suddenly we didn’t have to leave until 7am anyway because it was pointless to leave earlier. And I started a streak of half day trips. 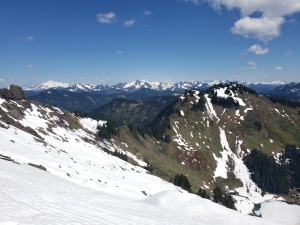 Near the top of Sauk Mtn with Sauk Lake below

Let’s be straight, it’s not better yet. I’m nowhere near the fitness level I was last year. I was doing job applications from 5am-7am instead of the gym, I had late nights at the office, I had nights where I was too drained by 7pm to want to do anything beyond shower and sleep by the time I get home. My coworkers are all impressed when I run commute to the office and I sit there bitterly thinking this isn’t how I want it to be, this is a sorry excuse for the reason I live in Seattle, everyone has forgotten who I am and what I do and why I get out of bed in the morning (hint: it’s not my job) because I’ve turned into a work slave instead of a free willed human being. Yeah, a lot of this is self inflicted because I take pride in being good at my job and I don’t want to tell everyone to go fuck themselves and do my thing on weekends regardless. And it’s a downward spiral. The less you climb, the worse shape you’re in, the less you can do, the harder everything is, the less you want to do, and getting the ramp-up started from square one is brutally humbling.

But as it turns out, there are actually some pretty decent half day trips out there.

1) Hurricane Ridge. Wow, this place is beautiful, and you drive right up to it and can walk as far (or not far) as you wish. And you get the ferry experience. It’s like the Paradise/Artist Point of the Olympics. They also have an adorable mini ski resort. This was a series of unfortunate events for Amber, who froze a binding that Brad expertly repaired with a random sling I had, wiped out many times, and booted all the way back to the car only to break a boot buckle while taking her boots off in the parking lot. Brutal. If I wrote a full post about this, it’d be called the Misadventures of Amber Yun.

Calvin gets some air below Castle

2) Castle Peak (ish). This is a great ski!! Short approach mostly along a road, but the Castle-Pinnacle Saddle is just a really fun, mellow ski run. Like maybe 3 miles round trip. Perfect for anyone new to backcountry skiing. I did this two days straight because it was fluffy and amazing and the gate doesn’t open until 9 so hypothetically if you have to work from 6-7am it’s not a problem. And you can do multiple laps without too much effort, especially if your friends wipe out multiple times on the way down and you have time to sneak another one in while they remember how to ski. I might not have earned that blue cheese steak at Copper Creek Inn with just this, but you bet your ass I’m still gonna eat it.

3) Greider Lakes. 8 miles, runnable for the first few miles, power hike the rest (or run if your’e more ambitious than me). The larger of the lakes is beautiful. Even Spada lakes (the reservoir for a lot of Snohomish county) is a beautiful shade of green with the snowy backdrop of Vesper looming above. Lots of great campsites (with toilets!) for an easy overnight. You do have to drive through a bunch of shooting ranges, which still makes me feel weird. The road was just long enough that I started to doubt whether I had the right directions. 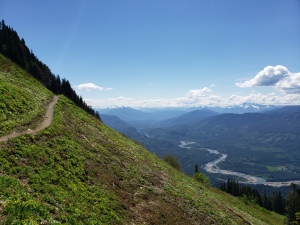 4) Sauk Mtn. 4 miles round trip for some fantastic views and steep switchbacks. It’s not quite melted out yet, most parties turned around at a short but steep snow traverse. I brought an ice axe and crampons because I was originally going to do Huckleberry Mountain, but bailed because I was lazy and there were too many spiderwebs. I thought I’d look like a total tool with mountaineering gear, but it actually came in handy. I made it to one of the ridgeline bumps, don’t think it was the old lookout site though.

Amber basically being a disney princess

5) Sage Hills. Holy crap. This is like a whole ass with the effort of a half ass, assuming you’re okay with a 3hr drive for 3-9 miles of hiking depending on how far you want to go (the wildflowers start immediately). Best wildflowers I have seen maybe in my life. And it’s basically in someone’s back yard. It’s a system of multi-recreation trails outside of Wenatchee, I literally parked next to someone’s driveway and had my mind blown for the next two hours of vibrant yellows and purples. This might get its own post eventually because the flowers are INSANE and it was like sitting in a disney movie. It’s like larch season. Chugging cold water when you’re hot and thirsty. Blankets and tea after a day of skiing. Oversaturated colors after a greyscale Seattle winter. You get it.

Surafel on the ridge to Hannegan

6) Hannegan Pass/Peak (okay fine this might get its own post when I make time). We had both already done Ruth, so we decided to go for Hannegan, and also that way I didn’t have to pass all of the skiiers and cry with jealousy (spoiler alert, we ran into them anyway. waahhh). ~8-10 miles, still lots of snow when we were there and I definitely should have brought skis.

And eventually I realized that half day trips are still pretty jaw-dropping. Especially on a sunny day, any hike is better than sitting in the city. Especially when you have people to join. Especially when you feel like you’re going crazy and don’t know what to think about anything anymore. I used to joke that the overnight trips kept me sane, and at this point I think there’s actually some truth to that. Something needs to remind me that I’m more than just my job, and the Cascades have provided that, so long as I can get to them.
So these might not have been the full ass trips I wanted, but they kept the hunger and excitement alive, and gave me something to still look forward to every weekend. I’ve also planted a garden (well, my visiting family did most of the work but I’ve been watering it), rediscovered my passion for cooking, read more books in the past 4 months than in the prior year, went kayaking on Lake Union, visited San Francisco, and the cilantro I planted is thigh high and I can’t eat it fast enough. And the Bruins are playing in the Stanley Cup Finals, which actually takes priority over almost everything else. Brooke, Forrest, Amber and I joked that everyone was domesticating. Forrest insisted it wasn’t domesticating, it’s more like renaissancing. This has been my late 20’s Renaissance. God forbid I should have a balance between mountains and housekeeping.
This weekend, I’m about to head out on my first mini overnight in months. The only other two I’ve had were a 12hr camp on Granite (which was technically overnight albeit straightforward) and that fateful ski trip where I ate a piece of candy that I found on the ground and it didn’t go so well (and the work issue over those days solidified the fact that yes, someone did have to monitor what we were doing, and my small act of rebellion was in vain). Wish me luck, guys, feels like I need to relearn how to camp and climb. At least I remember how to belay. I think.

One more from Sauk Mtn

One thought on “The Argument for Half Assing It”