A sunny day at Rainier National Park! I had been there two weeks ago, but we were completely socked in by clouds. You’d never have even known the mountain was right there if you weren’t familiar with the area. Tough to estimate distance/elevation accurately since we took a roundabout route along the Skyline Ridge path to begin with, but I’ll put the specific Glacier Vista stats anyway. Hiked 12/30/2014.

Originally we wanted to get to Paradise Inn for sunrise, but then we realized (oops) the park doesn’t even open until 9am. So we left Seattle before 7am and got into the park at 9:07. Somehow, other cars beat us. They checked for chains, we paid, and we were on our way. We didn’t need the chains until about 6 miles in, but given the past few weeks, chains have become second nature. It’s almost hilarious that I asked the tire place “Can I return these if I never use them?” because they’re a staple of Rainier National Park in winter, not to mention getting un-stuck on icy gravel mountain roads. I completely understand why the parks and national forests around here require them November through April.

Jean and Jonathan looking over a valley by Skyline Ridge

Anyway, once chains were on, we continued up to Paradise. Rainier was already gorgeous, and the day was perfectly clear. I thought I would recognize the trails from when I was there this past summer, but everything looked very different covered in snow. And the snowshoeing routes don’t necessarily follow the summer trails. Anyway, we put on snowshoes quickly because it was so damn cold. Jean had brought three pairs of sunglasses, which is good because Jonathan and I had brought zero. Jonathan had some issues getting his snowshoes adjusted, and I started jogging up and down the trail in mine because I already couldn’t feel my toes. I was wearing wool liners and wool socks, but I’ve been using my hiking boots to snowshoe: no insulation! It wasn’t a problem until that morning. Turned out, it was 11 degrees when we got started. As long as I kept moving, the wool did its job. 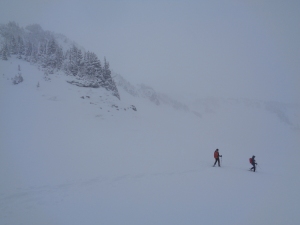 There were a few prints in the snow, but you could roam wherever you wanted. I put up a photo of Jean and Lee on the day we snowshoed through snow and hail for comparison – they’re trekking just north of the picture where Jean and Jonathan are looking out over the valley by Skyline Ridge. You can barely even tell there’s a valley beyond the hill to the right in the foggy picture. Both times, we had a set of fresh prints to follow as well as our map – nothing came of it on the cloudy day, but on this sunny morning, we soon came upon a group of parents and kids sledding! One dad must have seen our faces light up, because he asked if we wanted a turn with the sled. Turns out, you’re never too old to love sledding. We each took a run, and it was almost as good as glissading down Rainier this past summer only to wipe out at my guide’s feet back in August.

Anyway, definitely bringing sleds next time. Jean got some for Christmas, we have to put them to use. Then they offered us candy. Sledding and candy? Okay. A few other kids were digging a snow cave in a snowbank, which was totally cool. The things you can do when the snow is 6 feet deep are endless. It’s like a huge playground for adults (and kids) with okay, just a little bit of avalanche danger. There’s a suggestion of a trail, but it’s up to you how much you follow it. 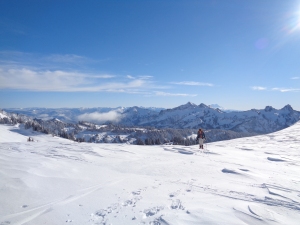 We continued on across a small bridge, and hiked up to a lower ridge to see how Skyline looked. And it looked steep, and far away. So we turned out sights left. Towards Panorama Point. Which I will achieve someday.

There were tons of people switchbacking up to Panorama Point, but we were worried about avalanches and stayed away from the slope.

A skiier had triggered one earlier, and you could see the debris. We snowshoed along some smaller knolls, which we soon found out was Glacier Vista. We met a few hikers from Portalnd, Oregon who were familiar with avalanche terrain. I asked how high the avalanche risk was on the slope everyone was climbing to get to Panorama Point – he laughed, and said “on a day like today?! Nothing’s going to happen on that slope” as I stood there thinking god dammit. Next time, when I know more about avalanche evaluation.

View south from Glacier Vista, Adams and Hood in the distance

But the views from Glacier Vista were still pretty incredible – Mt Hood, Adams, St Helens. Not to mention the rolling hills of snow or the sun lighting everything in view or the glaciers on Rainier itself. Looking at Rainier, I’m amazed I ever climbed it. 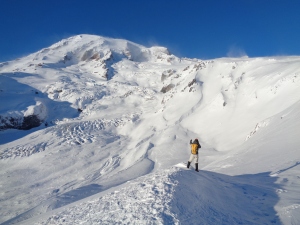 We sat at the final knoll of Glacier Vista and had tea, some awesome trail mix Jean had made (with rice krispies and chocolate covered peanuts! who knew rice krispies were so good in trail mix) and maple-bacon chocolate. Jonathan took some time lapses with his camera, and I’m pumped to see how those turned out. I spent my break dropped rice krispie trail mix everywhere like a clumsy child. After a solid 30 or 40 minutes, we decided to pack up and head back. We had to be out of the Paradise area by 4:30 since the gates at Longmire closed at 5 for the night, and we didn’t want to be stuck. What I didn’t mention was that my toes had been MIA for maybe 15 minutes, and I needed to get moving to warm them up again. I had foot warmers just in case, but that would involve taking off my boots, which didn’t sound ideal when I knew moving would help and the car was not even 30 minutes away. The rest of my gear was spot on. Now that I’m stocked up on puffy layers and a good outer shell (beta AR folks out there?!), winter hiking has been pretty straightforward. 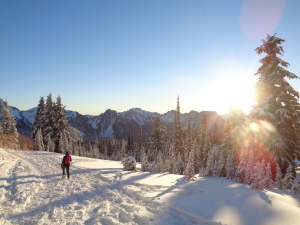 Soon to be alpenglow, the sun is setting

As we snowshoed back down the Glacier Vista trail (much shorter than the way we had taken to get there) the sun started making everything look yellow. Alpenglow was coming! We got back to the parking lot and snapped a few last minute pictures. Or at least I did. As the driver, I could not take photos from the car. Meanwhile, Jonathan was hanging out the back window as I drove as slowly as possible without pissing off the jeep behind us so he and Jean could get some pictures of the mountain, which was lit up all pinkish orange. I’ve only seen alpenglow a few times in my life, and this was incredible. Check out Jean’s pictures of it – sadly, I have none. 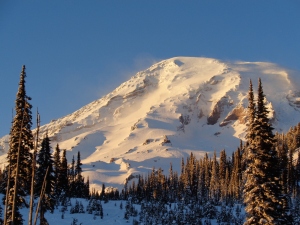 Rainier in the beginning of sunset

Being the Pacific Northwest, where nice polite drivers live, no one honked at us. Unfortunately, we did drive past a Jeep that got stuck in a very deep ditch, so even if you’ve got high clearance and four wheel drive, be careful! Don’t take those turns too tightly. As for me, I patted my trust Honda Accord, took the chains off a few miles later, and continued being awesome.

A full day in the snow! Finally feeling like winter, unlike in the city, where everyone freaks if it’s below 40. “Optional winter” out here is nice. And winter in the mountains is far more attractive than winter in gray, concrete Chicago. Sorry, my Chicagoland friends! Some sadistic part of me misses the subzero temps, but… I’ll stick with single digit nights in the mountains.