With a high wind warning and a potential 15″-17″ of snow over the weekend (according to NOAA), we figured the backcountry was out of the question. Don’t get me wrong, I love some good snow, but I’ve hit a point where I’m not going to spend two days in the wet unless it’s going to have a huge payoff. And I had to work at my office sample sale Saturday morning, so I couldn’t escape until around 2pm anyway. That should be my excuse, instead of admitting I’ve turned fairweather.

Luckily for me, Sam had just gotten a new camera and had been going stir crazy trying to find places to get some night photography for the past week, and he suggested Ancient Lakes. I had never been out there, it’s a long drive, not a technical hike or climb, and I’m lazy unless we can do something awesome. But this weekend, after months of said aforementioned stir crazy, it meant sun, stars, and a whole new section of Washington I had never touched before. I drove through it, once. Literally once. Anyway, here are the Ancient Lakes, several small bowls of chemical-contaminated farm runoff water in some eastern canyons, hiked 3/12/2016. Don’t drink the water!

I took off from Seattle at 2pm on the dot and drove around 3 hours through dead stopped traffic (who closes all four lines on a highway?!), open freeway, sun, rain, wind, snow, and best of all, HAIL. Large marble sized hail. As in the bigger-than-average marbles. Cars were pulling over because once there’s an inch or two of big marbles on the highway, you can’t go 75mph anymore and your windshield might break and did I mention they’re rolling all over the ground while it’s sunny at the same time and why wouldn’t you pull over to gawk at that?! No rainbow, though. I laughed after the brief hailstorm was over (it lasted maybe 5 minutes) because I wondered what I hadn’t driven through yet, and the answer was “a tornado.” Okay, let’s save that for next time.

I did get to play my favorite what-do-you-do-when-you’re-in-the-middle-of-nowhere-in-the-car game, called “scan every radio station and see what the options are.” Past Cle Elum, you have various styles of preaching, an abundance of country music, two pop stations, three Latino stations, and station 100.3 which I can only assume makes all of its money by playing “Sweet Dreams” by Eurythmics, on loop, 24/7.

Sam starting off in the meadow

Finding Quincy, WA was easy. Finding the trailhead was not. I mean it would have been if we had looked at WTA directions, but we did not. I was using my TomTom and Sam was using GoogleMaps, and we both ended up on private roads in the middle of some sort of orchard (separate private roads, might I add). After a few too many “NO TRESPASSING” and “PRIVATE PROPERTY, NEW OWNERSHIP” and “CAMERAS FILMING” signs I decided this could not possibly be where the “public fishing area” was. I eventually found Sam just outside the orchard and we managed to find the trailhead. Follow WTA’s instructions, guys. Seriously. 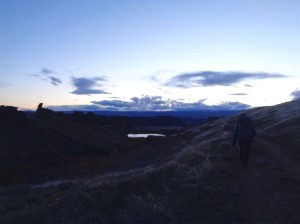 Another meadow at dusk

The trailhead said things like “no overnight parking” and “no overnight camping.” We said things like “ha!” and started hiking. I forgot how light an overnight pack is when you don’t also have a rope and ice screws and crampons and ice tools and all that junk. Just a meal, water, tent, layers… very pleasant. The sun had set, and we had some evening glow remaining, so I snapped the few pictures I could as we hiked down into the canyon. There were several other parties there, and we eventually scrambled up the opposite side of the canyon to a spot overlooking everyone. There was an awesome rocky outcropping that I hoped would look awesome with stars above it, and a little notch in a cliff across the way with the same idea.

We pitched tents on soft grass (SO much more comfortable than camping on snow and ice), made a small campfire, boiled water for dinner, and ran around taking pics and time lapses with the camera. Or, I ate while Sam took pictures. I forgot to bring an eating utensil and dumped boiling chicken vindaloo all over my face trying to eat it out of the bag. Some things you just never learn.

Feeding the campfire by our tents (photo credit: Sam)

It was a warm night, but windy, and clouds were in and out. The wind made things a bit complicated. We couldn’t get any good pictures of the notch (okay, maybe the pic above) because the vantage point was too exposed and the wind would blow the tripod just enough to blur things. But Sam got some great ones of our tents, that rocky outcropping, and the number of stars is just incredible. That camera is coming everywhere. I’ll sleep while Sam does the hard work.

Another lake below the canyon walls

I went to sleep in my cozy sleeping bag with my cozy liner which I haven’t talked much about but I can’t believe I ever camped without a sleeping bag liner. Seriously, if you have room for luxury, get a sleeping bag liner. It’s soft, it’s cozy, if you’re a little wet it wicks away the moisture and I swear you dry off more quickly than when you’re right up against sleeping bag material. I adore it. And supposedly (not convinced) it adds a bit of warmth to your bag. I’m cold all the time, so I’m not sure about that one.

We woke up to full cloud cover. Well, Sam woke up. He told me it was cloudy and I whined about it and dozed for another hour. We had set the clocks ahead okay?! I get my extra hour, this is a casual trip, I don’t need no alpine start. Sam went and scrambled around the area while I kept sleeping. Eventually I got up and we packed up and left. I snapped a few pics on the way out to make sure the trip was adequately documented. All the other groups were making eggs and bacon and fancy things for breakfast and I had leftover twix bites and toasted ritz chips in my car. Don’t get me wrong both of those are delicious, but I mean…. you can do better.

Sam following the trail past waterfalls

We made it back to the cars, with no tickets for overnight parking or our abject lack of Discovery passes (apparently required for this trailhead). Sweet. We hit the road, dreading the conditions at Snoqualmie. I stopped in Cle Elum for a steak (which I later overcooked – [expletives]) and gas, and interestingly, while it was snowing heavily in Cle Elum, there wasn’t much to worry about at Snoqualmie. The i90 bridge was worse, ugh. Big waves and wind and shaking, weird stuff. I made it back to Seattle, only to find out that minutes later they closed both the i90 bridge and the 520 bridge due to high winds and big waves.

So that’s that. A solid what, 18 hour escape? 24 hours if you include the drive in both directions? Not too shabby! And it feels like an entirely different part of America. Like I was in the middle of a road trip out in Arizona or northern Colorado. A much needed change of scenery.

One thought on “Ancient Lakes”