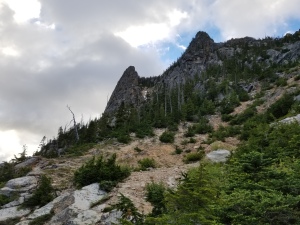 Robert heading up the second pitch

I don’t usually write about trips that are mostly rock climbs (as opposed to hikes/glaciers/true peaks) but I figure I should start since it’ll hopefully be a solid chunk of my summer activity. So here is a spontaneous trip up Spontaneity Arete, an underrated climb I’ve had my eyes on since 2016. As many of you know I had a slow 2017 largely thanks to an abject lack of confidence following a friend’s climbing accident, and while it’s taken over a year, climbing is finally starting to feel good again.

We drove out Saturday afternoon so I had time to get house chores done. We went straight to Winthrop for food and two hours of me dreaming about a Mazama cabin after filling up gas at Marblemount (this is important later). We ran into our buddy Alexei in Winthrop, surprisingly the first time I’ve randomly run into someone I know out there. Robert destroyed a ribeye while I devoured a burger covered in pulled pork and oh how I wish they’d just have thrown the burger and pork in a trough for me it was so good.

We drove back out to WA pass to camp at the “trailhead” for Le Petit Cheval. The trailhead is more of a pullout on the side of the highway, but we set up our bivvies next to the car and got a solid night of sleep beneath the two stars that were occasionally not obscured by clouds. We got hit by a few raindrops, but not enough to make us worry.

Scrambling with the Needles in the back

We got up at 5 and headed up the approach at 5:30. It took us around 90min to get to the climb and we spent a lot of time looking for the route start. The approach is a pretty clear trail that has yellow blazes after you cross the snowfield (talus field in summer). It swings to the right of the talus field and then back left following ramps up to the start, where you cut further left in front of the large buttress you’re about to climb. It was much more pleasant than the gulley approach sounded, and finding blazes is like having a scavenger hunt and distracts from the uphill. The route start says something like “look for two corners and an old snag” and you’re standing there like there are 8 snags on this ledge and 5 corners?? But we found one that went.

Robert following the third pitch. Such a blast

I’m still not 100% convinced we were on the actual first and second pitch, but they went, and they were 5.7ish. I led the first pitch, which was a kitty litter corner (see, probably not the route) that we followed up to some rap tat. From that it was up another corner and around a small roof to a second set of tat. Maybe the pac man overhang is just dramatically photographed on Mountain Project but the mini roof wasn’t very pac man ish.

From there, and this is why I think the MP rating is so low (1.8 stars!), you need to scramble and hike another 15min. We eventually got impatient and said fuck it we’ll just climb to the ridge from here. So I started up and as soon as I pop up on the ridge maybe 25ft later boom we’re at the start of the 3rd pitch. I shouted back to Robert. I think I’m just gonna keep going. I dropped a big ass purple cowbell hex into a #3 crack. Save the #3 for later. Psh. Who needs cams when you have hexes.

THE THIRD PITCH WAS AMAZING. I started laughing a few moves later and just said “oh my GOD” to which Robert shouted “everything okay?!” and I responded “it’s just so much FUN.” It was a fantastic mix of ledges and cracks with good pro and sharp holds. It could have gone on forever. I was having such a blast. I finally (sadly) found some tat and figured I couldn’t have had that much rope left anyway, so better stop here. Except the mantle to the left looks more fun than squeezing past a dead tree so I went that way and set up a gear anchor instead. I belayed Robert up, and heard him burst out laughing at the fat hex. It’s like leaving a joke behind for someone.

Come on guys they aren’t so bad. They make music as you climb!

Robert got up to the belay and continued on to the fourth pitch, where he followed a crack up to the right, faked me out and went left to duck under a roof which popped him out onto a beautiful short finger crack and dropped him off on a belay ledge (with more tat). He belayed me up and after fighting to retrieve a hex and a tricam he had placed I started up the fifth pitch. Oh and I made him move the belay so he’d have a better picture of me climbing.

Me starting up the fifth pitch (PC Robert)

We were worried about time, having taken like 4.5 hours for four pitches plus a 15min scramble. But we spent a lot of time looking for the start and figuring out the first two pitches and then looking for the 3rd pitch and at least now we were on a ridge where routefinding consists of “go up.” And I was thinking we had to be close. I cruised up these fantastic parallel cracks, scrambled a bit, wrapped around right and went up a juggy chimney sort of feature and set up my belay again nearly at the end of the rope. The rest to the top was just a scramble. So basically we did 5 pitches whereas MP says it’s 6 and the book says it’s 8. It’s a 600ft climb so if you do 8, they must be pretty short.

Robert just below the summit

We admired the views (Robert convinced me to make what I consider an exposed slabby move to get the best views) and then figured we needed to get our asses down since I was supposed to be getting dinner with a Peaks of Life climbing team to plan a fundraising climb the following weekend. We scrambled back to the first set of tat and started rapping down.

The raps are perfectly spaced for a 60m rope. Maybe one or two 4′ downclimbs. Not sure how many we did, maybe 9 rappels? Didn’t feel like that many but I think it was a lot. BRING YOUR APPROACH SHOES. The scramble sections and the “second approach” between pitches 2 and 3 were brutal in climbing shoes. Funnels of gravel straight into my shoes. We found the blazed trail again on the way down and were back at the car by 3pm. 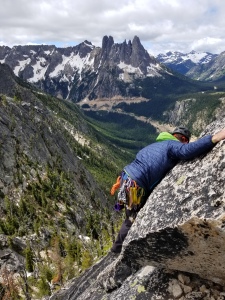 Spicy move getting back around the summit boulder

This is a seriously awesome climb for someone looking to build confidence in swinging leads and leading 5.7. Most of the pitches didn’t feel like 5.7 and only the second pitch got a bit run out (but like I said, not sure we were on the true second pitch). The upper pitches are just fantastically fun, solid climbing and somehow we only ran into two other parties. One bailed after the second pitch and the others were still hiking up as we hiked out. So we basically had the whole thing to ourselves, which is insane for a 5.7 climb at WA Pass with a 1hr approach.

It brought all of my rock climbing stoke back into action. I hate downclimbing and I did a fair amount of it on the way down and felt pretty good and the entire climb was just so solid, I never had the the frantic clip-and-take or the slam-and-jam or the hug-and-cry or the stuff-and-pray. Finally starting to feel like my 2016 climbing self again and hopefully it is only up from here. I left that pullout feeling on top of the world.

…and then we almost immediately ran out of gas. Which made no sense. Because we filled up in Marblemount and had only driven 157 miles. Some good samaritan Canadiens saved us (on Canada Day!) driving all the way to Mazama and back to us with a can of gas, and those two gallons of gas took us the 50 miles to Marblemount. Which for the record is a small miracle given my car averages 18 miles per gallon. The cars behind me probably weren’t too happy with my coast-at-40-mph-in-neutral-for-as-long-as-possibly. Pulling into the Marblemount gas station was the best feeling ever.

Second best, after topping out on a sweet climb. Or maybe third best after alpine bedtime. But I’m sure my relief was palpable as I filled my “20 gallon” tank with 21 gallons of sweet, sweet gasoline.
P.S. I think “petit cheval” means “little horse” which is sooooo cute

Even the highway didn’t bother me too much (PC Robert)