This was the best hike I’ve had in ages. What I intended to be a five-hour excursion turned into a full day adventure. Not to say the other hikes haven’t been great, it’s just that this was so beyond incredible.  I’ll start you out with a mediocre picture. 11/18/2014.

Starting out, I wasn’t sure I was making the right decision. Forecast was supposed to be okay, but the Snoqualmie guru the day before had predicted clouds, and it looked like he was going to be right. But I headed out anyway. The first obstacle: road to the trailhead. Good god. I should have taken a picture just to show what my heroic Accord handled. “Handled” is generous – I bottomed out only once, on an exceptionally steep narrow rutted rocky washboard uphill section where I was worried if I stopped, the hill start might prove risky. Yes, that’s just about every negative word used to describe gravel road besides potholes. Is it possible to be too rocky and steep for potholes? That was the road to this trailhead. Second obstacle: gas gauge suddenly flipped from half a tank to around 1/8th of a tank. Okay, mid-mountain-road-drive wasn’t the time to worry about it. Get to the top and worry later.

The sign for the trailhead was a welcome relief. The parking lot had two other cars, both high clearance all wheel drive. Damn it, this hike better be great after the four miles of abuse my suspension just took. Especially if I’m going to run out of gas halfway down a terrible mountain road on the way back. AAA won’t be too happy about that. I loaded up my trail running pack and headed off.

Trail is unsuspecting at first. Flat and almost gravelly, it turns into forest quickly, where you have to cross some pretty icy bridges. No microspikes just yet. After about a mile you pop out into a creek drainage valley, and after crossing a creek, you start to switchback up through meadows. Or what would be meadows, if everything wasn’t dead like it is in late November. As you get higher, Baker comes into view. Great! So at least I saw Baker. But nothing breathtaking, still not sure I made the right choice coming up there.

And soon I started to rescind that thought. Ice forced me to throw on microspikes, and I caught up to a trail of yaktrax prints. Great, others were up there somewhere! After what felt like an hour of switchbacks, I finally got to a more level area, where there was a few inches of fresh snow covering everything. 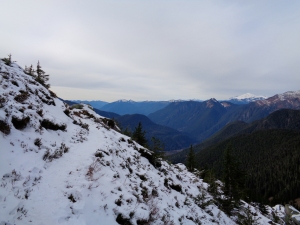 Beautiful. Except for where I noticed a pee arrow (I met the proud artist later) pointing off to the side of the trail. Cool, I’ll just ignore that. The trail cuts along an open slope, and eventually El Dorado comes into view, followed by Shuksan, which I was psyched to see. Though I will admit, it’s prettier from the other direction.

The trail continued through some snow fields, alongside some boulders. It was a neat glimpse of how deep the snow already was, despite it being a relatively dry season so far.

Eventually, I crested the ridge, and the lookout loomed over me, several hundred feet up what looked like a rocky scramble. How the hell was I supposed to get up there? Jesus! Zoom in on that picture to the right, you can just barely see it on the higher peak. I followed the yaktrax, they had been pretty dependable and everything was clear so I wasn’t worried. I hiked up to a saddle between the real summit and the lookout, and ran into a hiker named David. He was headed to the lookout as well, but claimed it was a scramble. Eager for adventure (and stupidity as usual), I put aside my poles and followed him.

There’s something about sitting on a rock jutting out above an incredible view that just makes it a more raw experience than standing on a trail. Halfway up, David seemed pretty wiped so we took a break and looked out over the lake (picture to the left). There were a few points where I looked at the boulders above my head and doubted my climbing abilities, but those years of pull ups paid off. Motivation to start lifting again, seriously. We finally flopped over the summit to where David’s buddy Michael (the urine artist) was waiting with two others he had just met: Jeff and Brian, the owners of the yaktrax I had been following.

I dropped my poles, gloves, and bag while they snacked and ran to check out the lookout. Luxury, by lookout measures. Books, games, a stove, extra food, even a freaking full size bed. I’ll be up there watching sunrise someday. Preferably in a bivvy by the rocks or a hammock set up on the rafters, but I’ll be there.

I went back over to the other four, and Jeff and Brian had decided to go scramble to the real summit across the ridge. The panorama above this post looks straight at the real summit. That’s the ridge we followed to get there. They asked if I wanted to go, and at this point, I couldn’t come up with a good reason to say no besides being imposing, and so I figured I’d tag along. I expected it to take us maybe half an hour ish, and then I’d be on my way down. 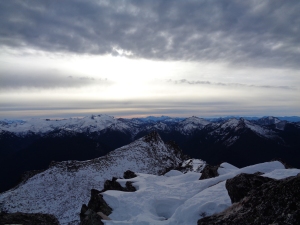 Half an hour.. right. We followed Michael’s tracks (he had already been over there) but that didn’t save us from plenty of post-holing. Every time I turned around, Jeff was thigh deep in snow. Which may have been due to my mediocre trailbreaking skills, sorry Jeff! But after trudging through the snow and scrambling over boulders, we were at the true peak. Amazingly, we were looking down on the lookout (pic to the right) in the distance, framed by three fingers and another mountain, which I can’t believe I forgot. Here’s a close up of the lookout: 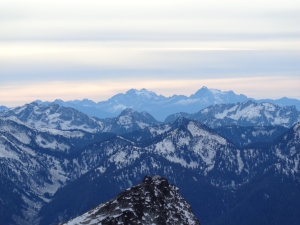 Did I mention how awesome the clouds were? They were high enough that we could still see everything, even as far as Rainier, and they lit up beautifully in the sunset. 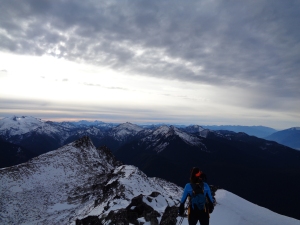 We spent a few minutes taking pictures at the top (Brian, if you’ve made it this far, you have a great eye for pics – thanks for taking a few of me!) and then decided it was time to head back. Jeff was wearing mesh running shoes, and I was already cold enough in my goretex hiking boots (which were full of snow) thank god I hadn’t worn my trail running shoes. The two of them did have gaiters, which I was sorely missing. As a side comment, wool socks are great. That snow melted and left me sloshing around, but at least it got warm and stayed warm as it melted. 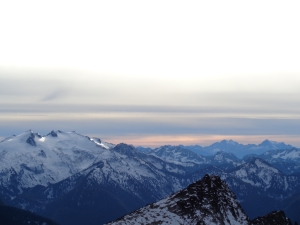 On the way down, which went quickly, we got some glimpses of the sun. There’s a pic of the sun reflecting off snow on a nearby peak. I saw alpine glow (the way the sunset hits the snow and turns everything golden) for the first time in my life, and somehow did not take a picture. Even on Rainier we went to bed before sun set, so I missed it then.

By the time we got back to the forest, Jeff and Brian’s yaktrax were completely trashed. Broken springs sticking up in every direction. Microspikes were totally fine – I guess I’ll admit they’re worth the $60. But taking off the microspikes meant we were almost back, and the sun was behind the mountains. We finished up the hike with headlamps (which I did not have), and I got into my car and realized I wasn’t done just yet: I had to survive the road again, and then find gas. I was the first one to leave the parking lot, but the other two cars caught up to me before the end of the gravel road. I thought I was making good time, too. I stopped at the first gas station I saw, and was rewarded with a “tenth-of-a-gallon-per-minute speed” pump. Five gallons later, I gave up, knowing it was enough to get home (the gas gauge jumped back up to 3/4 of a tank), and headed back to Seattle. Back to the city, back to work the next morning (okay, work isn’t that bad), back to rain and sidewalks and being woken up by the bus stop beneath my bedroom window.

10/10 day. I could relive it all over again. Scrambling to the peak was the perfect unexpected side trip that made it more than my average solo hike, not to mention I had company for more than half the time I was out there, which makes the hike back down that much more enjoyable. Especially when I turned around to see Jeff, Brian, and David all sliding on their asses down some ice on the trail. Hey, whatever works.