This one was a pain (albeit a beautiful pain). It took me two days! What the hell, Snoqualmie! I first went on Sunday, 11/16. I even had someone cover the first half of my shift at work so I could sneak in a hike, thinking if I didn’t have to be in Seattle until 11:30 I’d have plenty of time to get out into the mountains. Unfortunately, I had to turn around before reaching the top, so naturally I went back the next day to make it all the way. 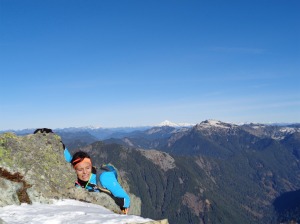 I crack myself up

The trailhead is about 50 ft to the right of the Snow Lake trail. I’ve hiked Snow Lake before (pre-blogging era) and never noticed this path, probably because it’s unmarked and goes straight up. Honestly, it felt more like a stair workout or climb than a hike. Relentless uphill, no flat stretches, no switchbacks, no nothing. Lots of ice near the bottom in shady stretches, which was tough to navigate, and tons of boulders and branches to step over. There is a junction to Guye Peak (a scramble) about a mile in – I was told it was “several hundred feet in” and kept thinking I must have missed it, but I finally found it after about half an hour of hiking. 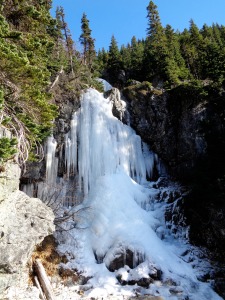 Frozen waterfall along the trail

Views take a while to open up, but there was a neat frozen waterfall along the way. It was one of the few distractions from the burning in my legs. One hiker said he saw a pheasant somewhere near the bottom of the trail. I must have missed it, which is too bad because I don’t think I’ve ever seen a pheasant aside from running around a farm. Anyway, crossing this frozen creek was one of the few flat parts of the hike, and after this, it continues straight up. Clambering over roots and rocks again. Eventually you break out above the trees, which is where the views finally become real (as opposed to glimpses) and the snow starts.

There were only a few inches of snow, and most of it was pretty packed down by the time I got there. We had a streak of such sunny clear cold days. I didn’t take out the microspikes until I fell (ha, let me go edit the “did I trip” section) and slid a few feet and figured maybe traction would be a good thing to have. I sat on a rock, figured out how to get the spikes on, and admired the view of Guye Peak (front and center) for a few minutes before continuing on.

This was the first time I had used microspikes, and they were great. A little crunchy on the rocks (parts of the trail were clear) but very helpful in the snow. I was following another pair of tracks that turned from a boot pattern to something I hadn’t seen since climbing Rainier – crampons! Someone ahead of me was using crampons. Okay, first of all it was 10am on a Monday, who could possibly be climbing? And second, why the hell were they using crampons? Should I be using crampons? Am I inadequately prepared? No, there’s barely any snow, microspikes are definitely better. I continued on, to the spot I had turned around at the day before. 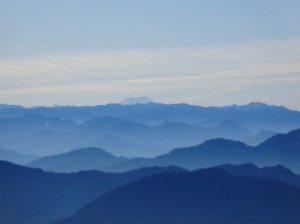 Here’s a very zoomed-in picture of Mt. Adams! That’s right, it was a four-volcano-day. Adams, Rainier, Baker, and Glacier, all visible from one point. Incredibly clear. Don’t worry, I have a picture of Rainier, too, looking out behind a cairn. Here you go. 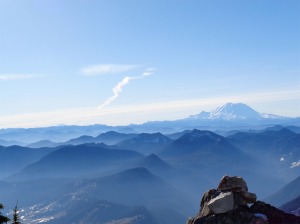 Glacier is in the background of the fake-falling photo up at the top of this post. I somehow think I managed to miss Baker in every single picture I took, which is unfortunate. I ran into a hiker at the top who knew almost every peak around us, which was incredible. I’ve got to get maps and just sit there and study. There’s a great peak finder app for smartphones as well, if you’re interested – the camera on my phone has never worked, so unfortunately it is useless on my droid. Essentially you use the camera to look at the peaks, and the app will identify the outline and tell you which peaks are on the horizon. Every range is unique enough for it to be pretty accurate, which is cool.

There was a summit register on top of Snoqualmie Mountain. One of the recent signatures was someone who had just completed their third round (I think) of chemo. Incredible. And there I was, whining about the steepness. Seriously, that’s just amazing. Anyway, views were completely worth it, and I’m glad I decided to go back and retry the summit. As it turned out, I had been like 5 minutes away when I turned around the day before… if only I had known. 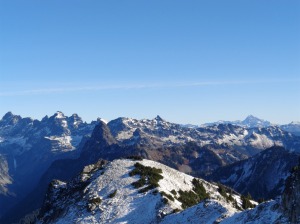 The return trip was tedious. I love trails with snow, I just think the fresh white coverings are so beautiful, but once you’re past the snow, it’s just dirt and rocks and trees and ice. Straight downhill, lots of footwork and some wear and tear on the knees. Luckily I kept pace with the hiker I had met at the top, and having company made a big difference. I had been miserable hiking down on Sunday. It felt like the trail never ended. But on Monday, it was quicker (could be a side effect of now being familiar with it as well), and more painless. The microspikes were especially helpful going downhill, and I’m thrilled I bought them. Pricey, but worth it.

Definitely check this hike out if you only have a few hours and it’s a clear day. Topping out at 6200ft, it’s the highest point in the Snoqualmie region, and you can see so many popular peaks in the area. Even i90 didn’t bother me, which is unusual. I bet it’ll be even more beautiful with a bit more snow.