With a week between hikes, I was itching to get out again. I spent a few hours agonizing over the fact that we were sacrificing a sunny day for a forest hike: guys, I turned into a hiking snob somewhere along the progression of this blog. Maybe I can trace my gradual adoption of hiker elitism through these posts. Either way, it needs to end now. So I reminded myself to just be thankful that I had friends who wanted to hike, and were willing to drive my (snobby)? ass all the way to the Olympics. 2/22/2015, a full day of driving, hiking, and hot-springing.

The ferry!! I didn’t know you could drive onto ferries. I had no conception of how this worked or that it was even possible until we were there. It’s expensive, but I don’t think I had ridden a ferry since going to Georges Island back in Boston a decade ago. So that was a neat start to the day, chilling on a ferry with hundreds of Chilly Hilly riders getting ready for their bike race.

The road the hot springs trailhead is easily passable, and drops you off about 2.5 miles from the springs. We decided to hit the springs on the way back. Obviously choice, I mean really. Who wants to hike to a frozen lake after getting out of hot springs? Boulder Lake is six miles down the trail, so we got started. The first part of the trail is down a wide, old road, with a few ditches and trees to climb around but nothing challenging, and very little elevation gain. 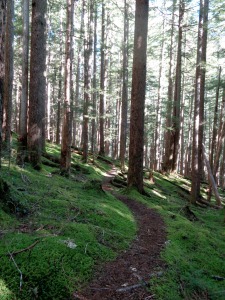 Moss EVERYWHERE. I mean everywhere. This is one of the greenest hikes I’ve been on, and it’s February. Does it look any different in the summer? Does it get greener? Is that possible? I don’t think it’s possible. Look at those carpets of moss. It gets green after the split to hot springs and Boulder Lake/Appleton Pass, and I started to come to terms with a sunny forest hike. 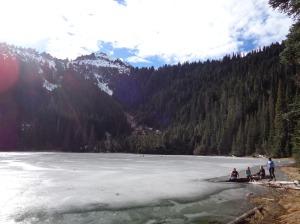 Relaxing in the sun by Boulder Lake

There are a few small creek crossings to manage, but nothing tricky. Elevation gain starts towards the last two miles of the hike, but by then you’re almost at the lake! Which was completely frozen over, but still gorgeous. Boulder Peak looms over the lake, and the only lousy part was that the sun was right behind it, meaning pictures were hard. Dammit. We set up snack time on a log that jutted over the water, and hung out for a half hour or so. There was a couple that had camped up by the lake, and I’ll admit I was as little jealous. I ran around taking pictures of everyone and everything, and desperately tried to get a time lapse without too much glare (I failed after many valiant attempts).

Emilie along the dirt trail

After some smores “snack mix” (more like dessert) and smoked salmon, we turned back to head to the hot springs! Woo! Just over three miles to get there, and the way back went much more quickly than the way up. We cut through a campsite to get to the springs, and started walking down the road where we saw steam and smelled sulfur – all I could think of was how much I wished I could eat eggs then and there. Don’t worry, you forget about the smell quickly!

We passed five or six before taking a larger pool that was off the road up a small path to the right. I was told more recently that there are some secret springs past that one(?) or somewhere around there, and another one inside a small cave, which I haven’t heard of. I know the Goldmeyer hot springs have some caves, but the Olympics? Secret cave hot spring would be awesome, I’ll have to do some more research.

We got out of the springs around sunset, and it was completely dark by the time we got back to the car. Which had a note under the windshield wiper. Shit, did we get a ticket? No, it was for an espresso shop. Who advertises that at a trailhead? I guess.. I guess I’ll go stop by sometime? Turned out there was a note on the back, which I read with increasing volume as I started to comprehend what it said: “Hello – my family and I were hiking up to hot springs and found your key on the trail. I put it under your tire for you, no worries, nothing missing.”

Note from our favorite person of the day

My friend Andy (the driver) had thrown his backpack across a ditch at one point (only about 1.5 miles into the trail), broken a bottle inside it, and unpacked everything. We’re guessing that’s where his key had fallen out, and we had NO IDEA until we read the note on the car. Thank god, because finding it in the dark on a Sunday night would not have been ideal. You can have faith in people sometimes! We still have no idea who did it – I posted a trip report, but no one has mentioned it. And we can’t thank them enough. It was a great day, and thanks to that family, we could end it that way too.*

Here’s a link to the strava map, and a quick screenshot. The offshoot to the south is the hot springs. As a side note, if you have Strava, you can see slightly more detail (and follow me!)

Can’t leave here without sharing the outhouse. It reminds me of Shrek. Unfortunately (forunately?), I did not get to explore the inside. 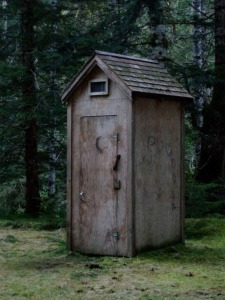 *Well we missed the ferry on the way back and had to drive down and around the Sound. But I slept through that and woke up one exit from my apartment, so who cares? Kidding, thanks for driving guys, and Lucy you are my new favorite road trip DJ.