So, what I thought would be a “pop culture” easy hike ended up being a bit of a butt buster. I’ll just start with that. I was lulled into a false sense of security, especially over the first two steady, soft, forested miles. But let’s chat about the rest of the hike before the elevation gain slapped me awake first. Hiked 3/13/2015, lucky Friday the 13th! 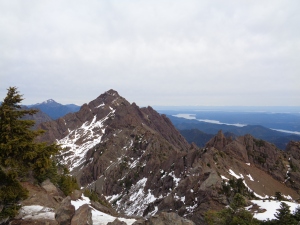 View of Mt. Washington from the summit of Ellinor

Thanks to some top-notch last minute planning from Zanna, we ended up setting up at the Skokomish park campground on Cushman Lake. It’s about a 20 minute drive from the Ellinor trailhead, and since we didn’t want to drive there and back from Seattle in a day, we camped out! I hadn’t spent a night out since December, so it was a very welcome mini-vacation. 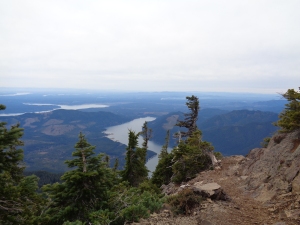 Rocky trail curving around a corner

We got to the campground at night, where Zanna had already set up with Benny (her dog). I had my first taste of freeze-dried food (Santa Fe Chicken and Rice by Backpackers’ Pantry) which was surprisingly decent. I’d have it again. I also have some Chicken Vindaloo for next time, and have heard that the Stroganoff, Chana Masala, and Alfredo packages are pretty good too. I’ll have to experiment.

Zanna looking over our camp setup

Rather than pitch a tent, the forecast was looking clear so I went for the hammock. Sleeping bag and pad inside bivy (just in case) in hammock, and I was sound asleep within minutes. It took me a while to figure out how to sleep in a hammock when I got it two years ago. I’m still not very good at it, I think because I don’t like sleeping on my back. But on an easy trip, it’s fantastic. My hammock was a bit too angled this time around, which I’ll have to keep in mind for next time.

The pleasant forest trail (taken on the way back)

Except for the five minutes around 2am when I woke up. Why did I wake up? Was it… oh, eerie, the wind just picked up. Was that the plink-plink of raindrops? Shit, come on, don’t rain now. How will the hammock hold up? Where’s the rain cover for the screen on my bivy bag? I’m too lazy and cozy to pack up and move into a tent. So I’ll just hope for the best. Luckily the drops lasted a few minutes and that was the closest run in I had. And it was warm enough that this time I didn’t wake up covered in frost like the last time I bivvied.

The lower trailhead is a 6.2 mile trip, whereas the upper is only 3 miles. But much steeper. We opted for the lower trailhead. The first two miles lured me into a false sense of security. The hike was so popular, I figured it couldn’t be that difficult. But as the flat, even trail stretched out, I started to worry that the last bit would be steep. The first two miles are through a peaceful, open green forest, on a soft dirt trail. Pleasant would be a good word for it. But don’t be fooled. 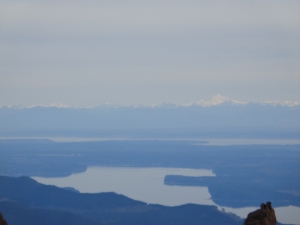 When the trail from the upper trailhead meets the main trail, that’s where the gain starts. At first you swtichback through a forest, and eventually you break out onto a rocky trail. A steep rocky trail. It was overcast, but you could still see the mountains. Amazing views of Rainier, Adams, St. Helens, even Glacier! And of course, if you look hard enough, you can see the skyscrapers of Seattle. Zanna asked a descending hiker how far we were from the top, and he responded “about a quarter mile, so maybe… half an hour?” You know what that means? That means damn steep! I was a happy hiker.

Encouraging rock left a quarter mile from the top

We followed the summer trail and essentially never hit snow. There was a ten-foot stretch of it just below the peak, but not enough to need any sort of traction. Once you’re on the peak, Mt. Washington is smack in your face, and you can even see Baker off in the distance. I wish I knew more of the Olympic peaks – I spend so little time over there, I haven’t learned any beyond being able to recognize a few looking over from Seattle.

Snacks while the true summit was too packed

The way down went much more quickly, but my knees suffered a bit. I was glad to have poles. Once back to the steady forest trail, it was glad to have a cool down to the workout and just stroll through the woods. We also left Benny’s leash along the trail by accident, and it was still there when we returned! We were thrilled no one took it. I didn’t think anyone would, but you never know.

On the way back, we stopped at the same coffee place we went to for breakfast again, but this time to get ice cream. Highly recommended if you need a bite to eat. No idea what the name was, but it’s right at the corner of 101 and 119 across from the gas station! A little coffee shop that has sandwiches, ice cream, and quesadillas too. I went there after Townsend too, since Woody and Tanna recommended it – it’s the perfect reward for a hike!

Strava map and link are both here. If you check the elevation map, you can see how much of it is in that last mile or so! Almost 2000ft gained over 1.2 miles. It’s not quite a scramble, just very steep. Maybe the last 15 feet of elevation could be a scramble, they’re pretty close. But if Benny doggie can make it, so can you!

Overall, it’s a very pretty hike. A bit of a butt-buster towards the end, which is great if that’s what you’re into. I like working for my views, and I’m always willing to get my butt kicked. 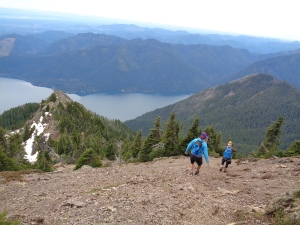 Benny did a great job. I was worried about him slipping on the snowy sections, but he had no issues at all. He never even got tired, despite running with Zanna on her mountain bike for hours the day before. Bundle of energy, that guy. I had never actually hiked with a dog before, but he was easy and listened to Zanna very well. It must be nice having some company on every hike you do.

Anyway, I’ll definitely go back to repeat this hike. I bet it’s even more spectacular on a clear day when you can see Seattle and the volcanoes clearly. I hear great things about Mount Rose, too, which is another I’ll have to check out. And I bet Ellinor is even more amazing when the peaks are covered in snow. So much to do, and of course the forecast for the next two weeks looks like solid rain. Maybe winter is finally here!

Not my finest, but it had to happen