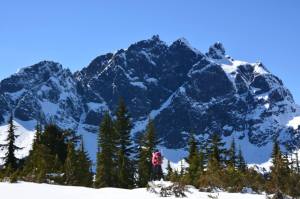 What to do on a day with avalanche danger so prevalent that NWAC released a “special advisory” statement? We had been planning St. Helens, which would have led to a glorious feeling of closure after my last attempt. Well, “attempt” is generous. I was rear ended in traffic on my way there back in January, 10 minutes after leaving my apartment. So it was an anticlimactic hike, to say the least. So this was to be attempt number two, but this time around, I was thwarted by avalanche conditions. 8″ of fresh snow combined with direct sunlight and temperatures in the mid 60’s did not bode well. Surafel suggested Eight Mile/Squire Creek Pass, a mostly forested hike that led to a small pass that looks straight at Three Fingers and Whitehorse. Okay, I could be convinced. Hiked 4/16/2015.

The road was rocky, but easily doable in any car. The trailhead is on the right side of the road, and the road actually continues. No idea where it goes. I drove a ways down it to make sure I was at the right trailhead, because I had seen fresh car tracks but no car, and I wondered if Surafel had come and passed it. Or maybe there would be an awesome section of rugged road with views where I could get pictures of my car (no luck). Eventually I figured I must have been in the right place since the last trip report said “road suitable for all vehicles” and the part beyond the trailhead was definitely not suitable for everyone. 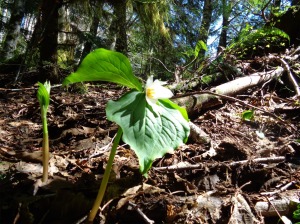 Just as I got back, Surafel pulled up (woo!), and we were moving within minutes. I wasn’t sure what to expect of this trail, but it was straightforward at first. It climbed steeply through the forest. There were a few blow-downs to negotiate. In general, for the ones you can’t climb over, walk straight up the hill next to them and you’ll get to the next switchback.

The trail is unmaintained, and reminded me of the trail up to Snoqualmie Peak. Narrow, rocky, covered in roots, in sections it barely looked like a trail. Once you accept the idea that it’s a vaguely defined trail, it’s easier to follow. And hey, that makes it feel more like the wilderness. 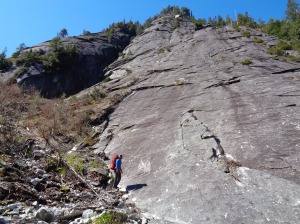 I can see why rock climbers like this place. Check out the huge rock wall to climb. It was massive, the type of rock I look at and can’t quite fathom how anyone climbs it. But I bet it’s a piece of cake for most climbers. It was shortly after this that the trail started to get covered in snow. We crossed a small talus slope, and beyond that, the trail was invisible. Okay, I was hoping to not be trail breaking again after how tiring Beckler was the day before, but I was here, so why not. For a while you could vaguely tell where the trail was. The forest was dense enough that when there was a windy line through the trees, it was a safe bet that it was the path. Eventually we emerged into a more open area, where the trees were more sparse and we were starting to get some views.

Eventually, I wasn’t sure whether the crease I was following was the trail or a riverbed, but it was heading in the right direction according to the map (and why would a creek run sideways along a slope) so I stuck with it. The going was slow, between postholing all over the place and stopping to check the map. But I was taking pride in making nice evenly spaced trail-breaking steps, keeping a steady pace, and figuring out where we were heading.

Unfortunately the snow kept getting deeper, and finally, after taking a break by following a melted-out riverbed, we officially lost the summer trail. I knew we couldn’t be far from the pass, but it was going to be a long slog to get there. Postholing became a butt-deep matter, and the occasional tree well wasn’t helping. I’d fight tree wells if they were people. The secret ones that don’t open up until you’re on top of them. Where you don’t even see a bump that suggests “tree here.” Surprise trees. Those sneaky bastards, hiding beneath the snow. We’re lucky they were small.

“Okay, I’m having second thoughts… about this trail…” I turned around and Surafel wasn’t looking too happy. What he didn’t know was that at that moment, I was in a predicament. Eff it. I stood there, ass deep in snow, one foot trapped beneath a tree branch, the other poking around looking for something solid to stand on that wasn’t the branch on top of my other foot. I didn’t come here to get trapped on a 5.5 mile hike that tops out at 4100ft. Awkward. I’ll admit, I could have been more level headed. I could have commiserated, or agreed to turn back, or at least been sympathetic. But instead, what came out was a fiery “WELL I DIDN’T COME THIS FAR AND PUT UP WITH ALL OF THIS GOD DAMN SNOW TO NOT GET A GOOD LOOK AT FREAKING THREE FINGERS” and I had somehow found my footing and leapt from the clutches of my tree captor and scurried up the hill (if scurrying is possible in thigh deep snow) and BOOM. Whaddya know? I could see the pass below us. 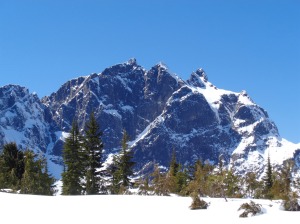 All things considered, it was pretty easy terrain to navigate. Great visibility, no avalanche danger because it was so flat and vegetated, and we knew exactly where we were. I wasn’t admitting defeat on this one. It’d be like the time I took a cab from REI to my apartment five blocks away because I didn’t want to walk up Denny. Before you say anything, in my defense it was the day after I ran a marathon. I wasn’t at that level yet. I was confident in where we were, where we were going, and conditions, and our ability to get there. I shouted back to Surafel. “I can see it! We’re almost there!” 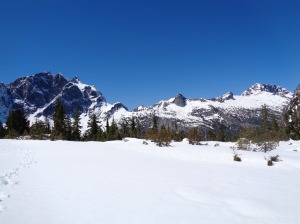 Three Fingers on the left, Whitehorse on the right

We were a little higher than necessary, so we trekked down to the pass. More like waded down to the pass, with how much snow there was. Three Fingers, unobstructed by trees, and Whitehorse, smack in your face. That’s what you get on this hike. I dropped my pack, took out my raincoat and extra puffy layer, lay them on the ground, and flopped down on them. Nap time. Lying down has never been so satisfying. Maybe it’s because I don’t generally go to bed when it’s sunny with Three Fingers in the backdrop. 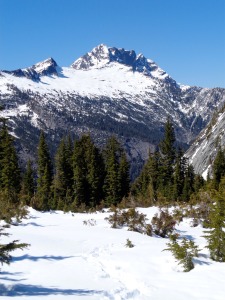 We snacked on tea and Surafel melted snow for a dehydrated meal. I played a game of “airplane or avalanche,” a personal favorite where you hear a rumble and have to make a snap decision on which it is. Surprisingly tricky sometimes. We heard four avalanches on Three Fingers, and I don’t remember how many airplanes. They aren’t as memorable as avalanches, apparently. 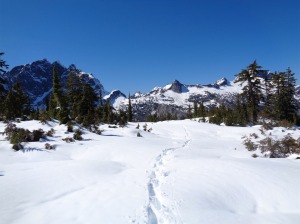 Our footsteps leading towards the pass

We decided to follow our own tracks back even though that meant going up a little bit before heading down to meet the trail. The theory was that this time at least we’d see the postholes coming, and know where to watch out. It worked, and we made good time going back down. If you ignore both of us wiping out multiple times. Mud is slippery. Wet tree trunks are slippery too, and so are mossy rocks. Oh, and one time I postholed into a stream beneath a tiny snow bridge, and crashed to the ground. Which meant I broke through the rest of the snow bridge, and was effectively lying in a river. Tip: Always keep crappy old towels in the car. You never know when they’ll be useful. I caught myself every time (by which I mean I avoided injury, my ass still did the catching) but Surafel might have twisted a knee at one point. Luckily, we were close to the trailhead by then. Fingers crossed for a quick recovery!

What we thought would be a quick 5.4 mile round trip had turned into.. oh wait, still 5.4 miles. But a long 5.4 miles. Three hours, not including the long break we took at the pass. But the views were really spectacular. Not bad for a day where I expected to have to lie low! Great choice by Surafel. A fun, safe area to play around with maps, peak-naming, and navigation (though the number of times I considered going for the ridge and peak instead of the pass was irresponsibly high). I suppose a lesson to be learned from this one is to do the research beforehand. I didn’t do much, since I wasn’t expecting snow, and when I assume the trail will be clear, I also assume I won’t have navigation issues. Didn’t help that I was completely unfamiliar with that end of the Mountain Loop Highway, but that made everything new and exciting. Strava map can be found here.

I’m amazed this trail isn’t more popular. We did it on a tricky day, but just two weeks prior there had been no snow. A straightforward, snow-free trail that takes you to an up-close-and-personal view of Three Fingers and Whitehorse? Where are the crowds? It’s a bit steep, but it’s short. No worse than Pilchuck, really. And I bet camping there is great – sunrise probably makes those peaks look bright pink at sunrise.

Three Fingers over a melting tarn