Sperry from the hike route on Vesper

Last minute plans are sometimes the best plans. On Friday night I was bitching about no one wanting to go on an alpine climb (we were going cragging at Index on Saturday) when JT suggested Robert and I go do Ragged Edge after cragging. I thought Ragged Edge was a 5.9 route, so I laughed and ignored the idea. Turns out, Ragged Edge is a 5.7, and lucky for me Robert brought all his overnight gear to Index. So when I said “hey, wanna drive to Vesper and hike up after this and do Ragged Edge in the morning?” the answer was uhhh, hell yeah! Climbed 8/5-8/6, in the midst of the near-apocalyptic smoke from the BC wildfires.

We got to the trailhead around 8 after a round of post-index burgers, and started up the trail at 8:30. The road is reported as closed, but it’s not. There was a sign but everyone was driving past it. Do so at your own risk. We settled on bringing hiking boots and rock shoes, and left traction and ice axes at the cars. The bright side of hiking up at night is that the heat doesn’t break down your mind and body and soul like it does from 11am-3pm, so we cruised up to the talus field below Headlee Pass without issue, minus some whining about the soft kitty litter scree on the trail. The cairns along the trail were actually helpful(!) and perfectly spaced out so that when I stood by one, my headlamp just barely illuminated the next. Headlee Pass itself was a series of surprisingly pleasant switchbacks in the dark. I reached the top, went to pee while Robert caught up, and then we took off across the talus traverse to the lake. We agreed to camp at the first damn spot we found, and that spot was a nice flat grassy clearing just above the outlet stream. We popped open some cider, talked about how incredible everything was, and spent the next 6 hours alternating between fighting off mice and dozing while the mice got back into our packs. Okay, my pack.

Robert checking out the hazy sun over Sperry on the approach

I woke up to a mostly eaten doughnut (…dammit) and a partially consumed apple cup (DAMMIT). I did a bad job of defending my food. Apparently nudging it with your foot when you hear munching isn’t enough to get mice to run away. Plus now they’ve tasted the glory that is Sultan Bakery, and they’ll be hungry for more. We debated whether we should pack up the bivvies and stash them in bushes (risk an unsuspecting hiker carrying them down or back to town thinking we forgot them), or leave them there to be clear it was a campsite (risk them being stolen or eaten). We settled on the latter and headed off to the start of the route. 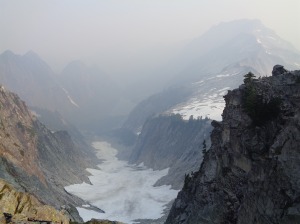 Dying glacier, not sure if it has a name

Whatever directions you’ve heard about the approach, forget them. Just follow the regular trail towards the summit until you finally get above the last clump of trees (~5500ft) and cross slabby rock to the right. The notch is very, very obvious, with several cairns, and the route is so popular you’ll probably pass campsites the entire way. From the notch there’s a series of ledges you follow until you’re at the start of the route. There were two groups already there, one that was starting up the layback variation and one starting up the original. The guys on the layback were already climbing whereas the group on the original was still roping up, so we figured we’d follow the variation. 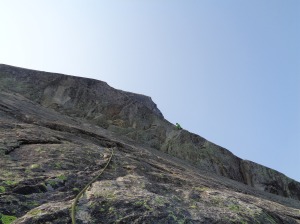 The first pitch of the variation starts with a sweet layback (that can also be climbed just as jugs besides the last move, which I forgot) and then follows basically some nontechnical terrain to the base of the second pitch, which honestly… we never really found it. I just sat in a comfy spot on some 2nd class ledges with only a horn slung as an anchor and belayed Robert up, who continued onto the second pitch. You can sling or thread an enormous boulder as well. Robert scrambled up a diagonal ledge behind me trending west, up and onto slabs, where he could clip bolts (turns out this route is half sport) and finally discovered the “faint white dyke” that supposedly marks the start of the pitch (lies, I tell you). From the slabs he traversed right and up a short gully to the bolted anchor. The slab traverse sucks, but if you go nearly to the top of the slab there’s a nice horizontal crack you can follow with your hands for a bit instead of just smearing sideways forever.

Robert waiting at the second belay

I took the third pitch, which goes one step right and then up and left across (woohoo!) more slabs! Keep heading left until you reach the arete. I stayed just right of the arete, where there is a crack for gear, a bolt, and a fixed pin (I’m not confident in my pin-evaluating skills so I backed it up with a nut just in case). The mini arete takes you to a short ledge, where you traverse right for an awesome gear anchor in a corner crack below the blocky boulders of the fourth pitch. If there’s already a party in the right corner crack, then there’s another crack right above where you top out on the ledge just barely to the right of the arete. Coordinate with the other groups and make new friends, there’s plenty of space. This pitch was a blast, possibly my favorite of the whole climb. And it lends itself to awesome photos.

Robert coming up the third pitch 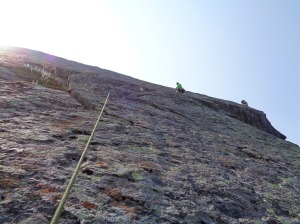 Robert led the fourth pitch, which was blocky climbing to a variety of choose-your-own-adventure cracks to another bolted belay, where I followed after taking like 50 pics of the group below us. We swapped gear and I continued up onto the fifth pitch (can you tell how amazing swinging leads is from this), which I had read was exposed but honestly it’s not that bad. It follows thin cracks and edges (which might as well have been slabby feet with finger cracks, ugh) up and right to another bolted anchor on the arete. The first few steps were awkward, I remember being very aware of the exposure until Robert started singing Gaston (yes, from Beauty and the Beast) and naturally I joined in, clipping a cam while admiring how many eggs Gaston eats for breakfast. The pitch ended up being more traversing than up, yuck, but it was a fun one. At the chains I belayed Robert awkwardly (made the anchor a bit too long so it was hard to pull up slack quickly and he’s a damn fast climber) up and we decided I’d lead the last pitch too. Awesome. Nothing like topping out on the final pitch of a climb.

Robert coming up the fifth pitch

I started up and it was all going smoothly until I dropped the entire carabiner of nuts on my feet. Well, my foot. Which was nicely jammed in a crack. How do you squat to pick shit up when you’re hanging in a crack with a hand jam and a foot jam? God dammit. How did I let this happen. I tossed in a cam and clipped into it just in case. And then I started the awkward process of collecting the various pieces, which miraculously hadn’t fallen off my foot. Don’t lean left, don’t lean right, don’t even breathe on them. It probably took me a solid 5 minutes to collect everything and get moving again. Apologies to the group behind us – we had always been stuck behind the group in front of us, but while I took my sweet ass time scattering gear like dandelion seeds the burden of slow-ass team was on me.

Robert coming up the last pitch, Copper Lake and Big Four in the background

Past that I cruised up the arete (which must be the only “ragged edge” of this climb) overanalyzing gear placements and one-inch heather ledges until I was at the top, where I whooped and slung a fat horn. That’s an easy anchor right there. Robert asked me if I had built anything. Don’t trust the horn? I threw two cams in a crack too and brought him on up where we raved about how amazing alpine climbing was and how cool it was even with the smoke and how it was addicting and why would you ever go cragging and I can’t wait until next weekend. We finally took off our rock shoes and put on the hiking boots we had carried on our harnesses (hahaha… ahaha… ah… bring trail runners), downed some snacks, and headed back to see just how much of our gear the mice had eaten.

You can avoid the snow on the way down if you want to, but it’s not bad. The slabs are quick moving, and we were back at camp to rescue our gear from the vermin. I filled up my water bladder at the outlet stream as a guy jumped in for a swim right upstream of me. Now I have all your slick sweaty body grease in my water source you jerk. Robert didn’t fill up (I offered him my iodine tablets, to which he responded “yeah but I want to be able to DRINK the water” – iodine tablets taste like dump), but requested my “giardia water” several times on the way down. I haven’t been sick out both ends yet, so I think we avoided the giardia. Knock wood.

We were back at the trailhead around 3. My legs were surprisingly tired. Robert had mentioned chicken bacon ranch sandwiches on the way down, and I had not been able to get the image out of my head for hours. We needed to know where the closest Subway was. We didn’t have cell service. Okay, whoever gets service first googles the closest Subway and tells the other. Robert took off, passing two other cars on a gravel stretch while I laughed in my car because I knew I had no chance of passing them. I might have made it past them like 35 minutes later in an actual passing zone, but by then Robert was way ahead.

Rolling down easy slabs with Morning Star, Del Campo, and Gothic in the back

We rolled into Subway basically drooling. Robert drank a gatorade before even reaching the counter. The cashier laughed as we lit up over sandwich ingredients, and apologized when she saw Robert had taken an empty beverage from the fridge (“he drank it he didn’t find it!!!”). That sandwich was one of the best things I had ever eaten. And it was still sunny out. I was home at a reasonable hour, in bed at a reasonable hour, crazy shit was happening. It was amazingly nice to have a whole weekend go that smoothly, that successfully. Ragged edge is a sweet route, probably a softer 5.7 in my opinion, and somewhat crowded. But if you’re the type to complain about crowds, you shouldn’t be on that route. Oh, and I strongly recommend bivvying, because it makes everything that much more pleasant.

Sweet silhouette pic on the approach