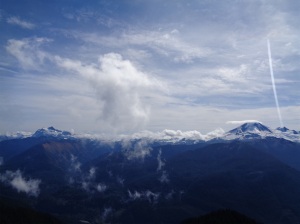 Shuksan and Baker from Church

Party behind me on the ridge

Okay before you say anything my uneducated ass didn’t realize this was a false summit. Do you research guys. It wasn’t a loss because it was still a pleasant hike but I’d have saved it for another day had I remembered. When I got there I had a “um…duh” moment, because I spent the whole hike waiting for the scramble and the scramble never came until I was on the false summit at the old lookout site looking at the true summit grumbling about the fact I didn’t think about this hard enough beforehand. But there was some cool history, nice views, and blueberries and butterflies EVERYWHERE. My camera is lousy at close ups so I didn’t get any butterfly pictures, but I got plenty of blueberries and blueberry pics and got to spend hours admiring Shuksan and Baker from afar. And the hike itself was on my “to do” list from before I started scrambling/climbing/being snobby, so it felt good to finally get around to it since that list was written in 2014. Finally hiked 9/10/2017! A last minute am-I-too-lazy-to-hike-no-wait-don’t-waste-this-beautiful-day hike. Oh, and I was so late getting moving that the ranger station was open when I arrived(!) which meant I could finally pick up a new America the Beautiful pass! Yay!

I got to the trailhead around 10am, I’ve been enjoying my lazy starts. The trail starts off on an old logging road through the woods where I got glimpses of fog and clouds and sun and prayed I’d have one of those hikes where you break above treeline above clouds and get to look out over valleys full of cotton candy fluff. It’s a very well maintained trail that’s actually a pretty pleasant hike despite how steep it is and it’s all soft pine needle type dirt so if you don’t mind the 8 billion switchbacks it would actually be a pretty neat run. At this point I assume all steep hikes will be rocky with knee high steps and fancy footwork, and it was nice to have one that was smooth trail. 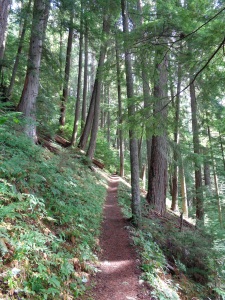 Past the estimated 8 billion switchbacks, the trail traverses into a wide open basin. I think I was a week or two early for fall foliage, because there were only patches here and there, but wow were the blueberries on point. I resisted the urge to stop and snack, saving it for the way down. It was halfway up the basin where I stopped dead in my tracks because I saw broken glass. Well that’s annoying. Who smashed a glass bottle up here? Seems rude. Whoa that looks like a shingle. Ha! Who brought that up here? Wait, sheet metal? Waaaaiiiit…. was there a lookout up here at some point? I put two and two together. Ah shit. It was going to be a false summit. That explains that peak over there that definitely looks higher than what I’m heading to.

First peek of the basin

The trail is a few looooong rolling switchbacks up to the ridge, where there’s a set cable (not the old remains I hiked past) for the “scramble” section, which is not truly a scramble. You could go straight up, which is an actual light scramble, or you can drop the metal cable as it starts to turn upwards and follow a boot path/trail straight ahead, which will wind through some trees to the top. It’s much less scrambly and isn’t exposed at all, but people tend to follow the cable which I think makes it a bit spicier.

The false summit is still gorgeous, it’s a bummer the lookout isn’t there anymore. I met several mice that I’m sure would love if there was still a cupola up there. The true summit stands above you to the north, and rolling ridges lead to Baker and Shuksan to the south. The lookout was built in 1928, and destroyed in the late 60’s. There were also an outhouse (I believe where the remains I saw were) and a storage shed, both gone now. Here is a nice link to the history, with a few pictures of the old lookout.

Steel cable going to the top. Stay straight around the corner instead of following the entire cable

I sat where the lookout used to be and deliberated about going to the true summit. I didn’t know anything about it. I had heard horror stories (terribly loose, class 4, microwave sized rocks tumbling down) and pleasantries (easy peasy, nothing harder than class 2, walk in the park). It was already 1pm and being solo I decided to just head down. I had no perspective on how long it’d take or what the best route was, so I’ll save it for another trip. Plus, the views wouldn’t get that much better, and that’s the reason I was up there to being with right? Also, probably should have brought a helmet given the horror stories. Just in case.

So I turned around and started down, passing a few other groups on the way. Two were collecting blueberries, something I always think of but never accomplish because they all end up in my belly and not a container. And how do you ever collect enough to bake like a pie? That’s literally hundreds of berries picked one by one. I was bummed to hit the woods again, so I spaced out and counted switchbacks until I was back at the car. No, I don’t remember how many there were, and you probably don’t want to know, because like I estimated earlier it’s approximately 8 billion.

It was surprisingly quiet that day, I only ran into maybe 5 other parties on what is supposedly a very popular trail. It’s really an awesome hike if you don’t mind driving 5 hours for a 4 hour hike. The views of Baker and Shuksan are spectacular, and I bet with fall color it’s reminiscent of Yellow Aster Butte. Or take it slow and collect blueberries, or go to the real summit, or bring more snacks for the top, or take a nap!