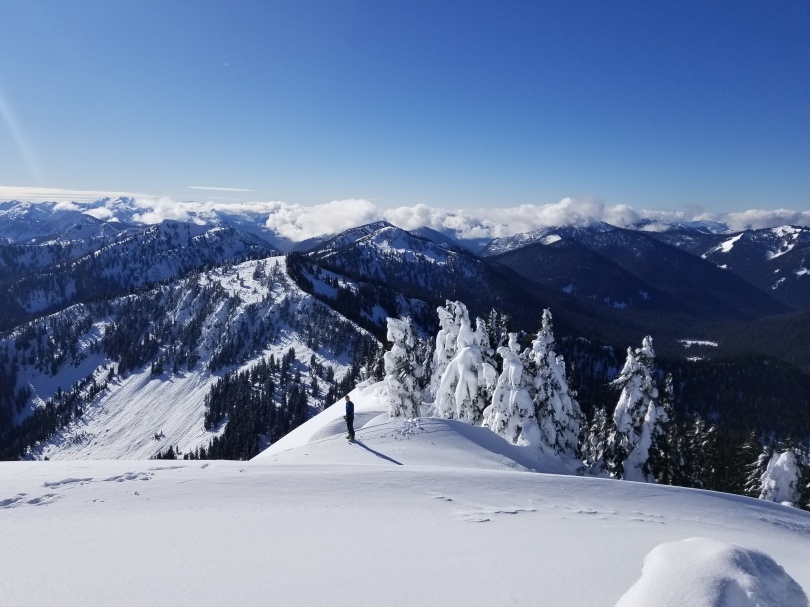 JT with Union in the background

Another beautiful sunny day, another almost-too-mellow ski tour. I got up at 5:29 to beat everyone to the bathroom before our 5:30 alarm went off, turned on all the lights, and stomped around enough that the others grumbled and got moving. We kind of had “meh” feelings about our objective, but I couldn’t convinced anyone on the badassery of the the Chiwaukums and we were feeling sorta lazy anyway. And Arrowhead and Tye Peaks seemed underwhelming after Rock Mountain the prior day. So we had a twofer, Uion & Jove Peaks, dug up from the OG hike list I pulled together when I first moved here. Skied 2/11/2018. 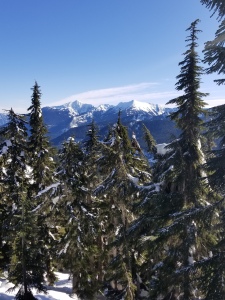 Our trip the prior day, Mastiff and Rock Mountain

We schlepped our asses out of the hotel around 6:15am since it was only a short drive to Stevens Pass. We looked up quick breakfast options and no diners were open, which was totally okay with me because I just want to grab some almonds and hit the trails. I am not a patient person especially when it comes to a rare sunny winter day. We settled for a gas station with the worst tea selection in the state of Washington, but it’s kind of unfair for me to expect gas stations to really crush the tea game. Though I hear they also had no snickers bars, which is an egregious oversight.

We reached Smithbrook Road around 8 and started skinning. Or I started skinning, because my extremities were already MIA and why be uncomfortable when you can start walking and just… not be uncomfortable? Usually it’s only a problem ice climbing or rock climbing in the cold, but this winter I have found myself very prone to the “screaming barfies,” even at silly places like ski resorts and trailheads. The screamin’ barfies are when your hands are numb and the circulation finally returns (which is why it’s common ice climbing) and it’s nauseatingly painful, so you want to scream and barf simultaneously and maybe cry a bit too. So I am slowly trying to figure out how to mediate that. For what it’s worth, I have yet to actually vomit. 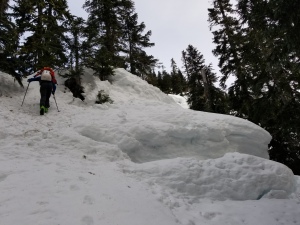 Why go around when you could go up?

We knew we had a lovely 2.7ish miles of road (ughhhhh) before the turn off. I figured since snow was so consolidated, we’d get to the hairpin turn where you take off for Lake Valhalla/Mt McCausland and head straight up through the trees to hit the ridge to Union. The alternative, a more mellow but longer route, is to follow the road to the hairpin on the east end, and gain the ridge from there, effectively paralleling the road all the way back to that first switchback where we left.

Walking the ridge to Union’s summit

Once in the trees, it was apparent pretty quickly that we’d be faster and happier booting it instead of trying to skin what was basically ice. We made quick work up to the ridge (honestly the toughest part of the whole day), snow getting softer as soon as we broke into the sun. We had snacks and met up with Kristen and Robert, who decided they’d chill on Union Peak while JT and I ran over to Jove. I mean, look at that south face. Bulletproof snowpack, plenty of time, and an estimated 1,400ft of vertical on a mostly open slope that would hopefully be spring corn by the time we reached it.

Looking along the ridge to Jove

So we turned on some music (sorry WHC, but no one else was up there so… something about a tree falling and no one being there to hear it so did it even actually make noise?) and followed the broad, mellow ridge to the true summit of Union, where we skied some low angle runnels, which was good practice for me. Unfortunately we had not quite made it to the ridge, and we could either walk back up to the summit to go further west or downclimb a steep frozen gully. We started downclimbing until I realized we were making this unnecessarily difficult, so we bailed on the gulley and walked up and over Union and found the correct ridge, which is a very mellow easy walk. We quickly dropped down to saddle and started regaining elevation up the ridge up to Jove’s summit.

The ridge is forested on the west but open on the southeast, so you get little glimpses of the terrain around you as you weave through the trees and we got more and more excited with every step towards the top. I freaking love these days. It’s a playground for adults and there I was chasing JT up through the trees so we could play in the snow and work doesn’t matter and money doesn’t matter and whatever was stressing you out was left at the parking lot because the only thing that matters is right now and look where we are. I started debating whether I’d try to ski the south face or not. On one hand, it doesn’t look that steep. On the other hand, it’s not worth wiping out here. I could just boot back town the ridge and meet JT at the saddle. But that’s lame, and then you carried these skis here for nothing. As usual. Fuck it, let’s just try it. Worst case you pop em off and walk to where you can ski again. And spring corn is basically a groomer. You’ll be fine.

We got to the summit and had a quick snack break. I took some of JT’s water because mine was buried and I was too lazy to dig it out of my pack. We snapped a bunch of pictures and I booted down to where I wanted to get a pic of JT, who dropped in to ski first. After snapping a few dope photos, I clicked into my own skis, got in a few wobbly turns, and then the snow turned from soft corn to crust. And I got spooked. I stopped and stood and deliberated for a few minutes before booting it to what I thought was more mellow terrain, but turned out to just be icier terrain. Welp, classic Eve trip, just no one was there to get pictures of me carrying my skis.

Heading back up to Union

Luckily, crust meant it was easy to boot down, and it didn’t take too long to get to the mellow terrain that (albeit still icy) was skiiable for me. I put the skis back on and caught up (down?) to JT and we trekked back up to Union where Robert and Kristen were waiting. The ~400ft elevation loss from Union to the saddle is really not bad at all, and we were back on Union’s summit much more quickly than I expected.

We followed the ridge back east to where we had met it, but instead of dropping down into the trees, we went slightly further east and dropped directly to the road. The snow was soft but the slope is covered in trees and I’m a wimp so I booted it (again) and then flipped the skis horizontally on my pack (stop judging me) to glissade the rest of the way. Yeah it’s ridiculous but you know what it’s faster and easier than postholing even if I look absurd. And someday I’ll be a real skiier and it’ll be even more hilarious telling the epics of how I learned to ski.* 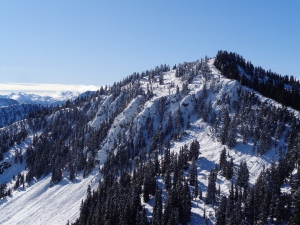 Looking back at the gullies on Union

The road back was a miserable ski. Totally chewed up by snowmobiles and skis and snowshoes and people postholing and then completely frozen over. I ended up just walking that too, while Kristen (yay!) kept me company and we let the guys have dude time doing whatever dudes do. We made it back within daylight (dammit, should have tagged Lichtenberg too) only to hit terrible-average-0.5-mph style traffic on highway 2. Eventually we just drove in the left lane since we were like a quarter mile from Mountain View Diner, but it was supposed to take us 9 minutes or something outrageous like that. Mountain View Diner was once again out of Banana Cream Pie (I’ve heard so much about it) so we settled for a dreamy slice of Peanut Butter Chocolate Mousse pie. And tea. So much tea. Really redeemed my tea game that day after the gas station fail that morning. 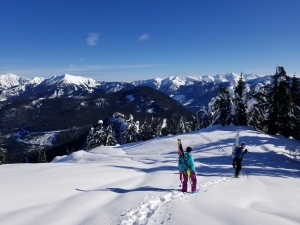 JT and Kristen excited to ski off the ridge

This weekend started with low expectations (late start, plan B peaks, I still can’t ski, blah blah blah) and blew every hope I had totally out of the water. Union and Jove are an awesome duo for a sunny day, and that southeast face of Jove is a spectacular ski. If only we had waited for it to soften up a bit more. With the right conditions, it’s also very quick travel to get there, despite the mind numbing 2.7 miles of Smithbrook Road. Bring a snowmobile. I swear those miles are worth it. You could also add on McCausland and Lichtenberg on the way back and pop out closer to the highway saving you some miles of forest road. Or you could go further north and traverse over to Labyrinth peak, which would make it a sweet full day trip or maybe even a solid overnight. Union & Jove alone are like a half day trip, we failed to utilize all of the hours of daylight so I’d recommend adding a bit more terrain to your plan. So many ideas so few sunny weekends!

JT and Robert heading back along Union’s ridge

*Or how I didn’t learn to ski, because really you should get good in resorts before going to backcountry. You don’t learn to ski efficiently when you boot for hours just for a couple hundred feet of vert.