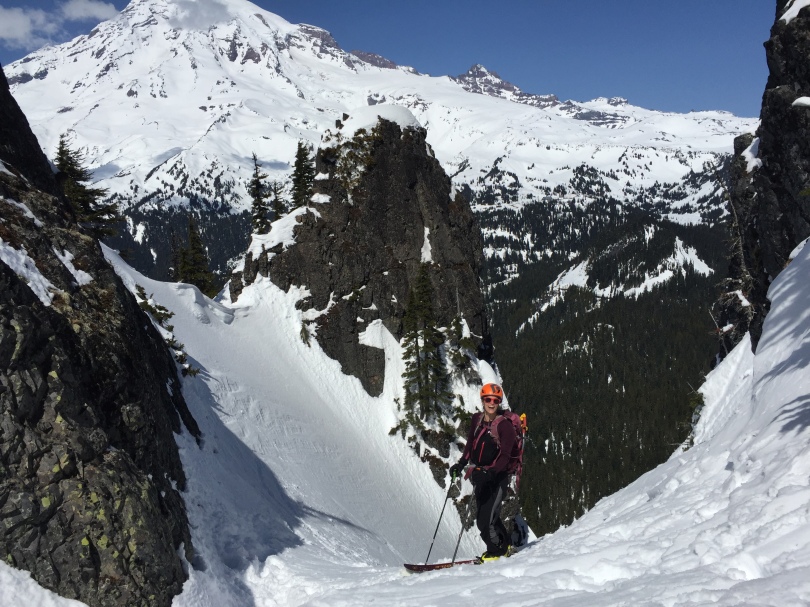 The view of Rainier

I started out the day as a bitch. Anyone can attest. Grumpy cat in true form. I had several friends going up Fuhrer Finger and Gib Ledges, I hadn’t been out in the mountains in weeks, I wasted my Saturday in the city, I was stressed about work and exhausted from the past few weeks and just wanted to disappear and despite my grumpiest efforts no two day trips came together. So there I was, at 7:30am, nagging everyone to hurry the hell up after lying in bed awake for two hours wondering if I should just go solo.

Somehow no one smacked me across the face even though I nagged for another 45 minutes, and then whined about getting breakfast, and then grumbled when Haley thought she forgot her beacon, and then sheepishly confessed that actually it was I, Eve Jakubowski, who had forgotten her beacon. I drove my own humbled ass back to the cabin to grab it and met them at breakfast where I finally relented to the fact that this was going to be a very slow casual day. So I enjoyed my Denver scramble and my cups of tea and the facilities with running water and took a deep breath. Skiied 4/22.

We couldn’t figure out why everyone was booting it up the slope from the parking lot to the upper road until we saw a snow plow toss a fridge size snowball over a snowbank. Oohhhhhkay. We’ll boot up on the left too.

We walked the road to the forest, clicked into skis, and survival skiied down to the meadow while Tricia snowshoed around us. You only spend around 10 minutes in the forest, which surprised me. I expected to have hours of suffering because that’s how backcountry skiing works, you earn your turns with hours of suffering. And instead we were cruising through a meadow, took the last snowbridge across the creek, and boom we were at the bottom of the three couloirs. The Fly Couloir is the obvious one on the right. You’ll pass the bottom of the Zipper just left of a patch of trees about halfway up, and Lover’s Lane is still a mystery to me unless I’m looking at Lane from afar, but that’s okay because I’ll never ski that one.

I started switchbacking up in the sun through a mix of slush and ice. The slush stuck to my skins adding who knows how many pounds of shit to my legs and the inability to edge on ice, so really a lose lose situation. I waited for Calvin to catch up to me to take the helmet and ice tool off my pack that I had neglected to grab before (rookie mistake), and started kicking steps up and up and up. The Zipper looked prime and untracked, and I was a little jealous we weren’t climbing that. I paused briefly for a selfie, savoring Calvin’s F bombs in the background because he hadn’t put on his waterproof gloves. I forgot just how satisfying breaking trail is. I was in the zone. I freaking LOVE steep snow. How had I ever forgotten?! Next thing I knew I was hitting sunshine and then topping out. I snapped a few pictures, explored the mini-couloir at the top only to determine I did not want to scramble the rest of it, and dropped onto the south face to see how far it would be to the summit. Far enough that I didn’t want to go because going uphill without skis was like wallowing in nipple deep slush and a recipe for disaster. 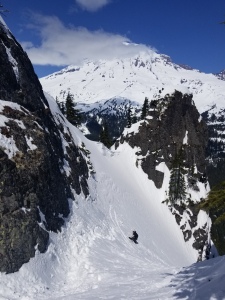 Tricia about to top out

We had snacks and water and got ready to ski down. I flipped my boots into downhill mode and SNAP! I stared in disbelief. It had finally happened. My beloved Proclines had broken. Oh my god. I can barely ski to begin with, I can’t ski with one boot in walk mode the entire way. I took calvin’s extra ski strap and the velcro strap I had and jerry-rigged it so I had some semblance of control, but the range in those boots is so crazy it didn’t make much of a difference.

I side slipped for what felt like ages. On soft snow, until I hit the shade. Then one turn. Then side slip on ice. Then another turn on ice. Side slip on ice. Turn. Shit myself. Slide on ice. Mega wipeout. Head over heels, is my ski above or below me, were there rocks below me? No, right? Okay, good, I came to a stop with my ski amazingly only a few feet away, and looked up to ski I had skipped the hard part. Awesome. Thank god we didn’t go after the zipper. I had forgotten that I don’t know how to ski. 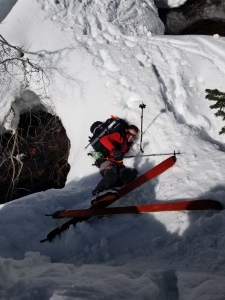 Calvin forgot how to cross creeks

I was shaken, that’s really the first fall I’ve ever had while skiing. I clicked back into the skis, made one turn, then two, then three. Gave Haley my picket in case I wiped out again (you still have that Haley I know you do) just in time to wipe out again, and finally I decided to pop the skis off to walk to wider, softer terrain. Finally I put the skis back on, and thoroughly enjoyed the rest of it. To the point where I skinned back up to Haley and skiied down again. And then skinned back up to Calvin and Tricia (being ski-belayed by Calvin, which didn’t seem enjoyable), and skiied down again. With my one boot. Which I would always forget about until I had to turn left. Ugh.

We made it back to the gate just in time for closing, including a survival glissade (skis horizontal so you can glissade) back to the parking lot because everyone at the bottom was yelling DON’T SKI IT IT’S NOT WORTH IT. I’m not sure why, because the slush was so deep glissading was hard and walking was even worse. Like wading through quicksand. More swimming than walking. I was beyond happy to chug powerade back at the car.
Awesome half day, one of the best I’ve done. Definitely need to go back for a day with better conditions, non-broken boots, and the Zipper when I’m better at jump turns. Dare to dream!