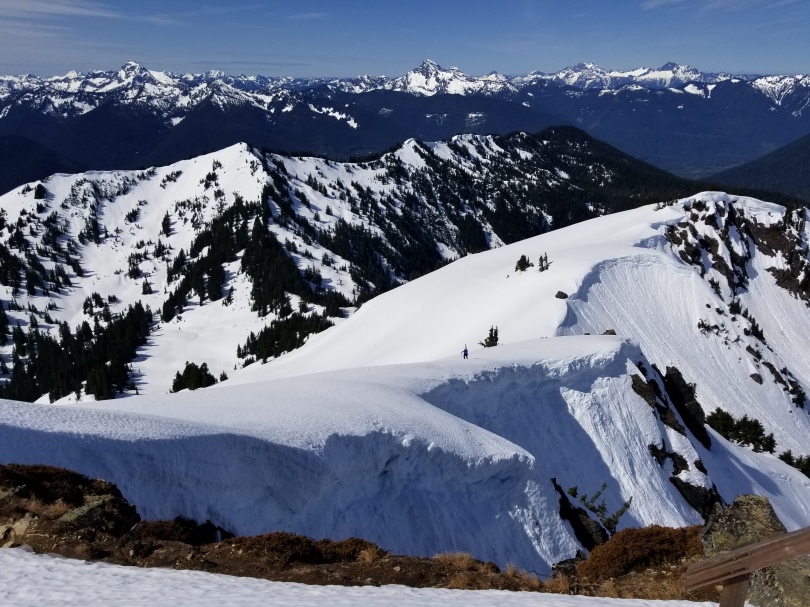 The best half day ski you’ll ever have. Seriously. Unless you consider Muir/St Helens, but the views from Green Mountain are cooler. The views, that huge face, the ridge line, the lookout, it’s just spectacular. It’s a shame the lookout isn’t open over the winter. Skiied on Cinco de Mayo, 2018! Should have brought a sombrero. 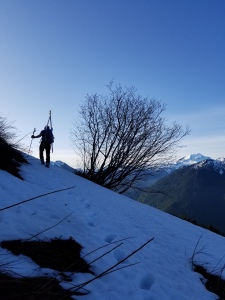 I convinced Brad to trailhead camp, so after an eternity of driving down the Suiattle River Road we found ourselves hitting snow immediately at the trailhead itself (perfect!).  Seriously, purgatory is probably driving the Suiattle River Road forever. Anyway, I was in my bivvy in 15 minutes while Brad set up his tent. We slept until 5ish, and got moving around 6. I had no idea really what to expect, but I thought we’d hit snow as soon as we were on the open slopes above the forest, and I wanted to get above treeline.

The first part of the trail was completely dry, and we hiked up through beautiful green forest until reaching the bottom of the open slopes. We followed the trail though we later realized we could have just cut up an avy slope to meet the trail above us (lots of traversey switchbacks). It was intermittent patchy snow mixed with heather and slide alder, and we booted it pretty much to the trees just above the lake, where we finally took the skis off our packs, thrilled to be on consistent snow. 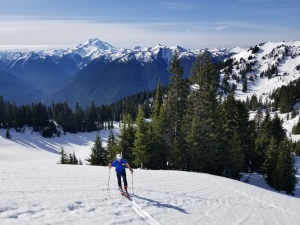 Skinning with Glacier in the background

It was icy to begin with, so the skin-ski down 50ft to the lake was a miserable 2 minute endeavor. From the lake we actually went left to the sub-peak west on the ridge, and make some nice switchbacks thinking we’d top out in this gully and follow the ridge east to the lookout. At the top of the gully we’d have to go up and over a steep icy slope, so I swapped skis for boot crampons and Brad clipped his shiny new ski crampons onto his skis. 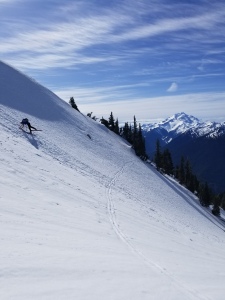 It’s freaky watching someone skin with ski crampons. Only the inside edge of the crampons were biting snow, the outside teeth on the crampons weren’t even touching the slope because of how steep it was. I was booting after him, and suddenly he turned back pale white and just said “I heard a whoompf.” I hadn’t heard anything, but whoompf can mean that a weak layer in the snowpack just collapsed, and the slope is about to slide. I bailed back to safety immediately, leaving Brad to figure out how to turn around on a steep slope with ski crampons on his own. Better to be ready in case something does happen. But he turned around gracefully and we booted it back down ~50ft to find a better way up, which we did by skirting east of the patch of trees on the sketchy side of the gully, avoiding the gully entirely. We should have done that to begin with. 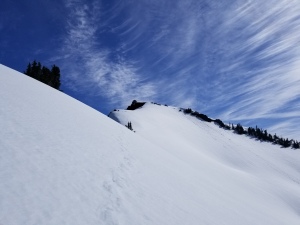 Topping out on the ridge was awesome, and I knew it’d only get better as we got closer to the lookout. Glacier Peak looks dope, but the real wild views are north and northeast of Green Mountain, so you don’t get them until you’re basically at the top. We could have skinned the ridge, but I hate transitioning, so I kept booting it because I thought the slope below the lookout was steep enough we’d have to boot that too and I didn’t want to bother changing around. 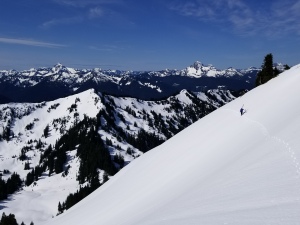 Brad coming along the ridge

The ridge was massively corniced, so we stayed far right. Up at the lookout we had snacks and snapped pictures to send to Surafel (there’s cell service up there once you get high enough which is crazy). And we marveled at the sloughs on the east face of the peak. There is SO much ski terrain up there. If I wanted a chill overnight, it’d be sweet to camp up there and just do laps. The south face was calling our names so we switched to downhill mode and party skiied it, rolling bumps of untracked spring corn with Glacier Peak in the distance. Holy shit, if I hadn’t needed to be back in Seattle by late afternoon I’d have insisted on more laps. I couldn’t believe no one else was up there, it was so perfect. 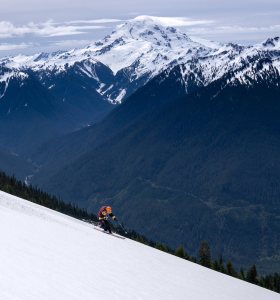 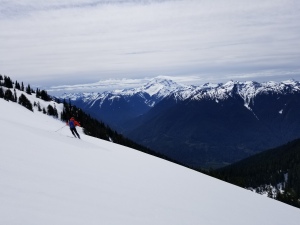 We put skins back on to get up and over the terrain around the lake, and booted it back across the patchy snow slopes. Took a shortcut down to the lowest switchback after noticing on the way up that we could have just walked down the avy debris. There was some wild evidence of massive slides that we couldn’t quite identify. There were some snapped trees and branches everywhere lying on top of the snow that looked like a huge slab had just knocked everything over. But there was not much snow left above the trees either. Slab a few months ago took them out? Huge glide avalanche in the recent few weeks? I was thinking if it was a recent glide then half of the branches/trees would be buried in debris (which they weren’t) but there was evidence of other smaller glide avalanches east of this patch so who knows. All I know is that you cross a bunch of avy terrain to get to the lookout, and I think we ended up choosing a good time of year to get after it because there was so little snow left until the lake. And while I complained about that initially, it’s better than risking being caught in an avalanche like the one that destroyed those trees.

Back to the lake!

We were back down by early afternoon and drove back to Seattle, lamenting the fact we hadn’t done laps. But I was stoked to have gotten in some turns up there. I had been at the lookout in fall (fall foliage!! ahh!) and remember looking at the face below the lookout thinking that has got to be a sweet ski. And we finally got to check it off the list. 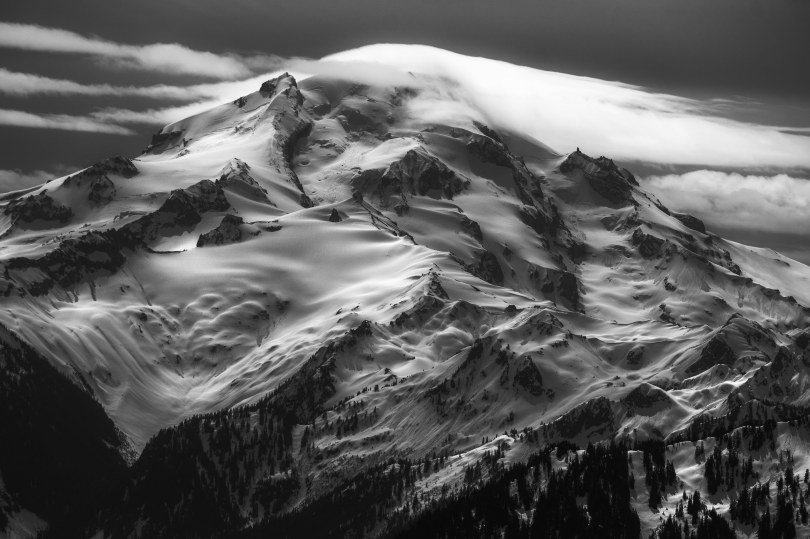