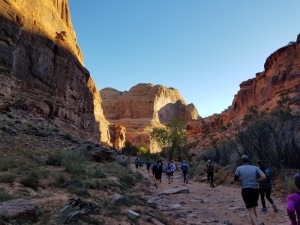 So by now, most of you know we’ve been winging this marathon for a few years. And we didn’t think it could get worse than last year, where my father went on one seven mile run leading up to the race. I remember him announcing at mile 17 that his legs felt fine, but man they were just so tired. Duh and/or hello, you’ve run 10 miles farther than the farthest you’ve run since this day last year.

This year, there was no training. I went on a panic 12 mile in early October and felt fine and then did another panic run a few weeks ago by Rainier so obviously that’s enough to finish a marathon, right? My dad knocked out a few 3-5 milers, but nothing consistent, and nothing considered “marathon training.” And yet there we were at the starting line, in the second-to-last wave, ready to see what happened. Like I said, it’s an art. We didn’t have the brute force that most have when they’ve spent three months training. But we had knowledge. We had history. We had patience and the finesse of two dehydrated, delirious, stumbling elk. We brainstormed bail points.

The morning was off to a smooth start. I panic-freaked on my mother who was blow drying her hair when we needed to get breakfast, because we can’t be late to the starting line MOM and we only have 17 minutes for breakfast now MOM we need to go MOOOOMMMMM (I’m still a child).

We enjoyed our 14 minute breakfast and hopped in the car. I had my father drive, because he is a more efficient driver. 20 minutes out, I jokingly asked if he had his bib, because we had nearly forgotten in past years. He stared at me blankly. He did not have his bib. So we drove back to the hotel, grabbed the bib, back in the car, and luckily (thanks Mooom) we were able to get dropped off at the starting line instead of parking a half mile away and walking. We were waiting for the start within minutes, since the first waves had already gone. But we were at the back of the pack. Bring it on, baby.

Cowpie and the rock that broke my phone I assume

We walked probably 80% of the first 5 miles. Mostly because everyone in front of us was walking and it turned into bottlenecks. In years past, that has driven me utterly insane because I am not a patient person. But this year? With a single run under my belt in three months? “lol, we can walk this.” “lol, we can walk this too.” “lol I don’t know this bit is somewhat uphill if you look at it sideways.” “Dad you’re running too fast.” And my calf injury is back. And running in sand sucks. Especially for injured calves. And it’s hard to dodge the mildly surprising number of cowpies that littered the trail while running. Oh, and I immediately dropped my phone on the only rock surrounded by 5 miles of sand and shattered the screen. So that was good.

Around mile 5, my calves finally relaxed and the runners started to spread out. Miles 5 through 9 are my second favorite part of this race, because you cruise along a plateau followed by a long stretch next to the canyon rim. It’s slightly downhill, it starts out as a wide sandy path and narrows to single track, the sun is out, endorphins are flowing, people are having fun. Most around us were doing the half marathon instead of slogging through the desert for 8 hours, which I was positive would happen given our peak conditioning.

Beginning of the bottleneck

There was a worse than usual bottleneck at the scramble section, so we spend maybe half an hour waiting in line. That gave my father time to take off his shoes, shake out some sand, have some snacks, get cold in the shade, take a leak (Jakubowski family record for most-pees-during-a-marathon), and wonder how Mom would do jogging next to the 1,000ft drop beyond the canyon rim. We scuttled down the scramble, hit the aid station, and it was time to follow the marathon runners while the half folks jogged back to finish.

I mean if I had to wait in line…

We knew the out and back was coming. Last year they had extended it, and it was probably the single most mentally difficult section of the race for me, because I didn’t expect it. After years I know this course like I know my commute to work. I can space out and suddenly be at point B. But no, they had to add mileage to the worst section of the race. This year, we were ready. It would be long. It would be soft sand. There would be bottlenecks. We agreed to just walk the whole thing. I waited in line for a pit toilet instead of saving time and peeing in the bushes because who cares, it’s the lames part of the race. Except then it wasn’t just sand. And there weren’t bottlenecks. And we were jogging. And the fall foliage was the best we’ve ever seen it. And everyone was so positive and smiling and cheering and saying “Great job!” as we passed. I laughed. This has got to be the most positive out-and-back we’ve ever had. And suddenly right around the first corner was the punch station. Oh my god. Dreams can come true.

We punched and bailed and continued the positive support on our way out. We ran down the road where my usual lone yellow tree was still green. We grabbed snacks at the mile 14 aid station and jogged our way to the base of mile 15. The climb. We started hiking right away. We enjoyed the views. The fall foliage was late, and you could see the bright greens and yellows snaking through the valley below. My father forgot shorts and was running in sweatpants. It was like 70 and sunny and I could feel the salt sweat-crisped to my face. We started picking off runners one at a time. This was our jam. We had finally figured out Mile Fifteen. That’s not the top. Neither is the next corner, or the corner after that. Doesn’t matter. We’re in the zone.

River winding away in the distance

“Huuuuuaaaaagcchhhkk. Noooo!” We heard the joy and determination of the woman behind us leave her body as we rounded the second to last curve and it was not the top. We laughed (sorry, miss) and commiserated. We should have warned her. You’re so close though! We snapped our usual picture by the rock. “Is this one?” “No this one is too early we did that a few years ago.” “I think that was it.” “No it’s up here.” “We definitely passed it.” But there it was, sitting at the top like a potato chip. Happiest pic we’ve taken at that mile.*

So far so good! 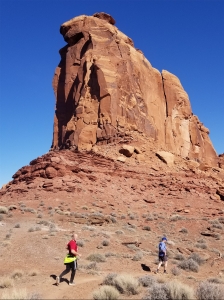 “Is she still taking pictures”

“The aid station is always farther away than I remember.” Yeah, I know. Same here. Except even with that knowledge, it was STILL farther than I remembered. But that’s okay, because miles ~16-18 are my favorite miles of the race, and 18-22 are up there too. Because miles 16-18 are a long, mostly flat downhill on top of the world. Single track, dancing through underbrush and small plants, sucking in your waist and turning sideways to fit through canyons. And finally, the aid station.

We popped salt pills, chugged electrolytes, puffed chip crumbs. I stuffed my face with oranges, which I hate in real life, but for whatever reason my body decided that those were the most wonderful things on the planet in that moment. And off we went, knowing we had a few miles of rolling slickrock before a loooong downhill back to the pseudo-finish-line and the adventure 5k. We shared the good news with Mr. Orange nearby. Just a bit of slickrock and then 3-4 miles of niiiiice gradual downhill!

Except we were wrong. Whatever mileage they took off of the out-and-back compared to last year, they re-added in the slickrock section. Which I’m totally okay with, because it’s beautiful and unlike anything I see in my normal life. It’s a walk/run hybrid, because even the downhill running is an unpleasant knee-pounding rocky uneven descent. But after miles of navigating mountain bike trails (one cairn to the next, first year I’ve seen cairns!) we hit a road that eventually took us to the classic canyon rim ramp that would drop us along the river back to the pseudofinish. And that is possibly the only section of the marathon where you get several cruiser miles of mild downhill, mostly single track. It’s spectacular.

That is, until you get close enough to hear the finishers. And the cheering. And realize you still have a mile to the pseudo-finish, followed by the adventure 5k to close out your 26.2. At the 23.1 mile aid station I let myself have some coca cola, which I decided to use to swallow salt pills. Turns out trying to pop three huge salt pills with very carbonated soda is a bad choice and I sat there convincing my body to not vomit everywhere while the terrible mix was stuck in my throat. My brain won the battle and we kept jogging, ready to be done with this.

The adventure course was smooth. I forecasted a muscle spasm in my left adductor and the right side of my going. But no. My body had to go for the wild card. Shin cramps, bitch! Those exist?! I could feel the muscles on the front of my shins contracting. Oh boy. It’s going to be an interesting last few miles. I sucked it up and changed my stride from lazy heel strike hobble to forefoot strike. Sucks for my calves, but what do you know, the shin spasms went away. 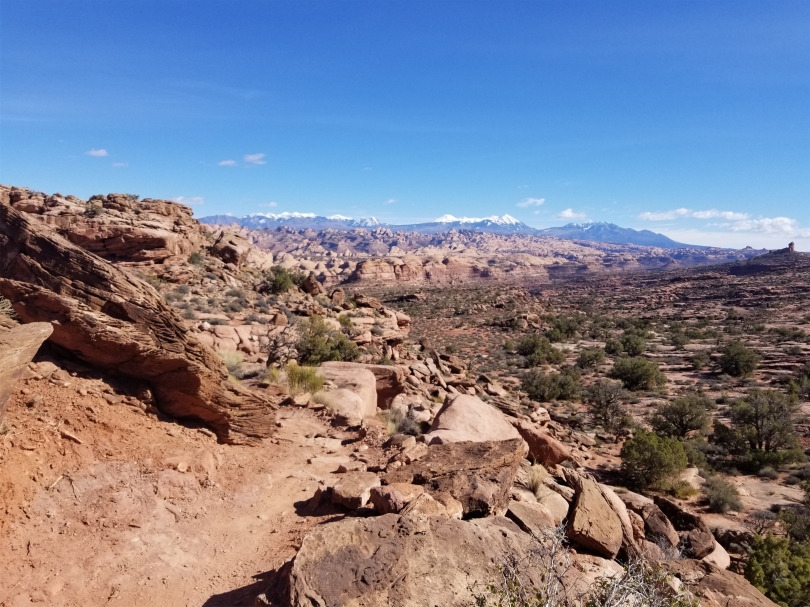 Only to be followed by a short adductor spasm. I put pressure on it and kept jogging because who needs adductors. That one cleared up quickly too, which was a relief since it’s the same cramp I had finishing Seattle last year, which resulted in some of the more hilarious photos of my running career (if you can call it that). Moab did no such thing, all of my photos are awesome.

The parking lot jog wasn’t as awful as usual, but my dad did count to (I think) three thousand steps. Or maybe it was 1,500. He did it three times, because when he got to the end and we weren’t at the finish yet, he’d start over and do it again. Back in the woods I panicked briefly that we were backtracking on hte marathon course and had missed the finish. But we found the turnoff, we were right, and we ran across the finish line laughing at how pleasant the whole race had been.

Topping out on the scramble

Maybe it was the low expectations, or the assumption we’d suffer, or the multiple bail plans that we bailed on. Or the sun and the late fall foliage. Or everyone being so happy during the out-and-back. Or they put some crack in their electrolyte mixes, I don’t know. But it was a fantastic day. 10/10 race. If I’m ever injured to the point I can’t run, I’ll drag my ass out there to volunteer. It’s just a great event. Thanks Mom for putting up with my shit that morning and chaperoning us around, and congrats Dad on running a marathon without even training for a half marathon. Someday you’re going to be a mortal human but that day hasn’t come yet.

*Sometime around this, my mother was in a cafe in Moab, where she met the 2nd place marathon finisher. While we were still out meandering through the desert.