There is a tiny person in this picture. Rainier from the back of the second burrough.

What the title doesn’t mention is that this post is more like an anthology of pictures of random people that I don’t know who will never know they’re in my photos. But let’s get started.

I’ve never been to Sunrise. Over four years in Washington, multiple Rainier summits, and I had never set foot in the Sunrise parking lot. It was time for that streak to end. I’ve had the Burroughs on my trail run list for years and both those and Fremont Lookout on my OG hikes list from the list I compiled when I first moved here. I wanted some miles for my poor pampered legs (marathon next weekend… hahaa ahah ah…) and figured this would do the trick and have me back at a reasonable hour.

I slept in until 7:30. Anyone who knows me knows how outrageous that is. And I was in bed at 9:30, it’s not like it was an alcohol fueled wild Friday night. I had tea, hopped in the car with my gear, shot Brooke a quick message so at least someone would know where I was, and drove myself out of the stagnant marine layer that has been plaguing Seattle mornings thanks to this high pressure system. I stopped at a gas station in Enumclaw and bought the rest of their paninos. Think pre packaged salami wrapped around cheese. They. Are. Delicious. And Rainier, unlike Seattle, had sunny blue skies and a sparkling mass of snow dusted glaciers. And was about ten degrees warmer than Seattle. Ah, yes. Allow me to roll down the windows of my car. Finally.

People frolicking along the first burrough

In the parking lot, I threw on a thick wool baselayer and stuffed my puffy jacket into my running pack and took off. I wasn’t sure where to go but I knew the trail started “northwest of the parking lot” so I went with my trusty strategy of “start walking and you’ll probably find it.” And I did. It doesn’t matter where you walk, all trails/roads will lead to a set of steps that takes you to the main trail which takes you to Sourdough Ridge/Frozen Lake, where it eventually branches out into the Burroughs, Fremont Lookout, and some longer backpacking loops (or trail runs for the less lazy) through the park. Frozen Lake looks a lot better in early spring, right now it’s a mostly dried up mini reservoir that supplies the buildings of Sunrise with water. But you cruise past that and head towards the monster that is Rainier, where the views will get better and better as you get up and over the burroughs and the crowds get more and more sparse. Oh, and I dropped my thick wool layer like immediately. Because it was 65 and sunny. None of that 40 and foggy Seattle crap.

Looking back at the first burrough

Did you catch that? THERE’S A THIRD BURROUGH. Don’t stop at two. Drop off the backside of the second one, where you’ll turn a switchback and be treated to one of the best views of Rainier in the park. I nearly tripped over my own feet. Some dude was trotting up the hill, making me look like a lazy runner hiking anything with a hint of incline. Meh. I guess I am lazy. I snapped some photos of a woman hiking with Rainier behind her, the scale is just crazy. Another creeper photo? Check. Rainier is enormous. And yet you can look at most of the Emmons route from here, the second most popular route on the peak. 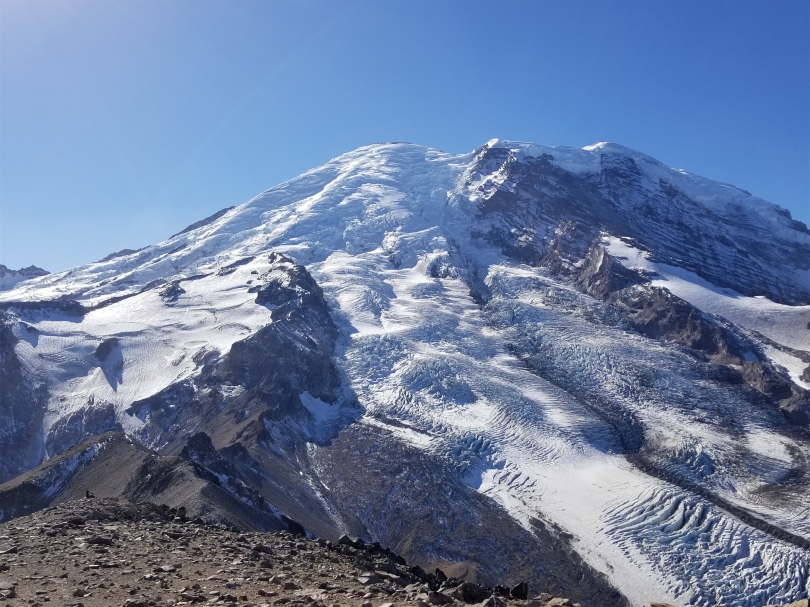 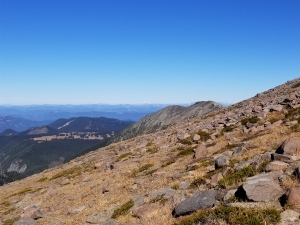 The terrain stays fairly mellow, until the final climb up the third burrough. The top of the third burrough is a long, mellow ridge. For the number of people there, it surprisingly did not feel crowded. I snapped a few photos. More creeper photos of others enjoying the views. See the theme when I’m alone? You’re all at risk.

As amazing as the views were, I wanted to get miles on my legs, so I started to jog back down. Running back down is a blast. You aren’t quite on top of the world, more like in open meadows on a wide, rolling ridge. Technically it is all alpine tundra, despite being at a relatively low elevation. The sparse plants that do grow there are very fragile. I was there in late fall, so everything was basically dead. The growing season here is wicked short, and we had a cold snowy snap in early October that I assume was the end of the season here. Not much fall foliage to be seen on this hike. I passed a woman who gasped “NO!” and then started laughing. “You passed us on the way up and you’re already passing us on the way down!” Her partner looked at their feet. “We’re wearing running shoes… we could do it too!” 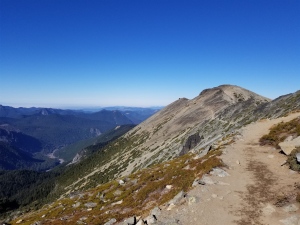 Back at the junction, I decided to check out Fremont Lookout. You can see the lookout perched at the end of the Fremont mountain ridge from the burroughs, and it was too tempting to pass. Can you tell I want a legit camera with a zoom lens? I had so many zoom shots here and my camera just doesn’t do the scenery justice. The trail to the lookout gradually gains elevation cutting across a hillside, where you weave in and out of small trees and shrubs with glimpses of mountain goats in the distance. I came across a happily family and shamelessly took a creepy ass picture. I mean this was the creepiest one. I didn’t even realize how good it was until I got home because I panicked while taking it (okay so maybe not shameless) and ran away (literally) as soon as I was done like the awkward creep that I am.

The lookout is a two level lookout, first I’ve ever seen. It was built in 1934 and is still occasionally used by park staff today, though it was boarded and locked up when I was there. The views are pretty ridiculous, and considering it’s only a ~5 mile round trip hike, it’s pretty accessible to everyone. I had a quick snack, took more creepy photos, and started on my way down, cursing my overeager eyes and stuffed stomach. Did I need six paninos? No. No I did not.

At the junction for the last time, I had to tell myself it was only another 1.5 miles to the car. You can do it. Come on, legs. You got work to do. Give me an inventory of aches and pains so I know how screwed I am for Moab. I jogged past a group of girls who jumped out of the way (“move, bitches!” is what the last girl in line shouted, laughing) and as I went past I heard “oh my god she’s like a GAZELLE” which as many of you know is both hilarious and encouraging when you feel like a banana slug/foal hybrid trying to learn how legs work while moving at the pace of molasses.*

The wall I wish I had in front of my house

The last half mile to the parking lot was clogged with people, but my tired legs didn’t mind. I couldn’t resist getting a picture of the talus wall built along the trail, because I wish I could build it in front of my house. I got back to the car (which you can spot like a mile from the parking lot thanks to its amazing color) and chugged a La Croix. Yes, I now have those in my trunk, and they are PRIME after hikes/runs/anything. The only problem is that a) they kept falling out of my trunk when I parked in front of my house until I realized I was an idiot and turned the cartons around and b) my car occasionally stockpiles empty La Croix cans. Sorry guys.

*Actually, molasses is kind of fast. It was once recorded at a speed of 35mph during the Great Molasses Flood in Boston. That’s a lot fast than me, unless I’m in a car or on a plane or you’re measuring my speed relative to the sun. https://en.wikipedia.org/wiki/Great_Molasses_Flood