Brooke walking back down the ridge to Carne

We’re back in business, baby! After a three month unintentional hiatus. I can’t really explain what made this fall through besides a repulsive number of hours spent in the office (I sent emails from too many glaciers and rock climbs), the eventual burnout that smacked me across the face, and the ensuing surf vacations that I thought would cure the burnout but really just left me sitting at my desk a week later on Monday with post vacation blues wondering how I was ever going to change my day-to-day to something more stomach-able and oh my god am I lacking vitamin D already and why doesn’t Seattle have an ocean and thank god I have cool coworkers. 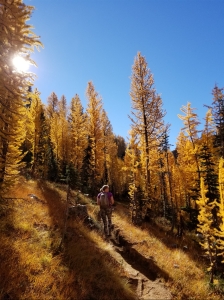 Looking in every direction

Well, my shit is not yet together, but it’s consolidated in one place. And I’ve been getting out to the mountains this whole time, some trips more ambitious, some trips more lazy. I’ll backfill all of them slowly, even if it’s short words with a dump of photos. I mean let’s be real you’re probably only here for photos and blue-bag-of-poop jokes (there aren’t any in this post, you can stop reading here). Anyway, yesterday is what finally lit the fire under my ass to start writing again.

Last week was the most brutal week I have had in a long time. There are a few things that keep me sane.

Fall foliage in the forest

So we’re bringing writing back into the picture. Because it’s easy to forget how much I like writing. And I fucking. Love. Larches. Don’t even read the words just look at the larches!!!

Every year I set aside a larch weekend. This year I hadn’t done that yet. I went to Leavenworth. I went skiing. I have the hunger for climbing, right? I go crazy if I don’t climb or ski on a weekend, and every year I swear I’ll make time for larches next year and by the time larch season rolls around I’d rather be going up cracks in Leavenworth because I’ve forgotten how great fall foliage is. I thought I had missed the window. Seeing larches twice in a year is like a blue moon, and I knew they were out the past two weekends so no way was I getting this weekend. But the mountain gods spoke and there was one last chance! Brooke had a crazy week and somehow I convinced her (it wasn’t that hard) to come hiking Sunday instead of working. So we drove up to Carne Mountain.

Buck over the larches

First things first, the road. It’s really not that bad. I had heard so many horror stories. High clearance is probably a must, and so is a spare tire (not a donut tire, that won’t help you). But I’ll take deep ruts over washboard any day. Chiwawa River Road > Cascade River Road. We can barter rides. I’ll happily drive Chiwawa if you drive Cascade.

The trail is pretty relentless for a hiking trail (as opposed to a climb approach). It starts out in the woods, which had their own fall foliage if the sunlight hit the trail correctly. The difference between the way up and the way down was wild. On the way up everything just looked dead in the shade, but on the way down with the sun hitting the trail the colors lit up. The forest is probably a solid 3 miles with no larches, only green. I started to panic, as I do every year on the way to larches. What if they aren’t there? Maybe the WTA report lied. Maybe they all dropped all their needles yesterday. Maybe they’re suddenly brown today. Maybe they literally all disappeared and no one has realized it yet. Anything could happen.

And then you turn a corner and break out into the basin. Basically heaven. A suddenly flat meadow surrounded with larches on all sides and the yellow is overwhelming. Brooke laughed because we just kept gasping and shouting and it’s not coherent but you’re just so excited. You just want to lie on the ground and roll around with all the larches. Walking through larches is like walking through tangible liquid sunshine. Like chugging water when you’re thirsty, except for your eyes. Or like being wrapped in a cozy blanket in a cozy cabin with a wood stove and it’s raining outside. Everything is amazing and the colors are bright and oversaturated except it’s real life. I know everyone obsesses about larches. Allow me to add to the problem.

Maude and Icebox Ridge over larches 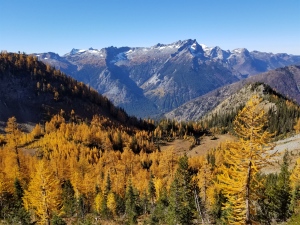 We continued up the trail taking pictures in every direction. We hadn’t actually run into that many people, either, which was amazing. At the opposite end of the basin the trail regains its steep grade because you aren’t done just yet. We went left at the fork to follow the Rock Creek trail, and once we hit the ridge, we continued left to summit Carne (more steep rocky bits). The larches were more sparse here, but the mountain views were outrageous. Buck, Glacier, Maude, even a peek of Bonanza. I had never been to this area before, and it is just astounding.

We shut up quickly on the summit when it became apparent the other people were enjoying the silence. Once they left we snacked on sour vampire bat gummies (halloween is approaching) and decided to head over towards Old Gib, which appeared to have larches. 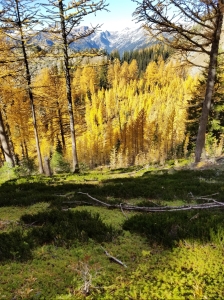 We probably should have done the Carne high route instead, but I didn’t think we had time. The trail to Old Gib is mostly a traverse instead of the ongoing steep grade of Carne, but it conveniently avoids EVERY PATCH OF NEARBY LARCHES. Larches high? Trail goes low. Larches low? Trail goes high. Arrrgh. So we turned around after a bit, knowing we’d at least get to experience the Carne basin larches all over again on the way down.

Admiring them all over again

And it was just as good as the way up. The light changed and even more trees were lit up now. We ran into Anita and Steven who I hadn’t seen in a month. They narrowly missed seeing me absolutely eat it wiping out in a patch of mud. I made up for that later when I did a classic faceplant tripping over a downed log. In my defense, it was because my flare leggings got caught on it, tearing two large stab holes. RIP my pants. I’m leaving the pun there. I’ll show myself out.

Getting back to the car was pretty quick, but it was a bit of a knee banger. The fall foliage in the trees was lit up more than in the morning, so we still got to admire fall. And on the drive out, we admired the bright yellow aspens that kept us distracted from the road. Except the ruts, which are legitimately enjoyable driving if you have the right car. The pointy rocks, however, can eat a dick. 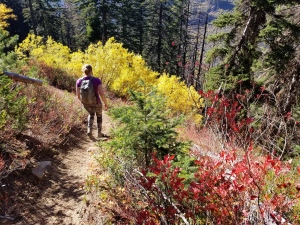 One more of that fall foliage

P.S. My car is the color of a larch. I have great taste.