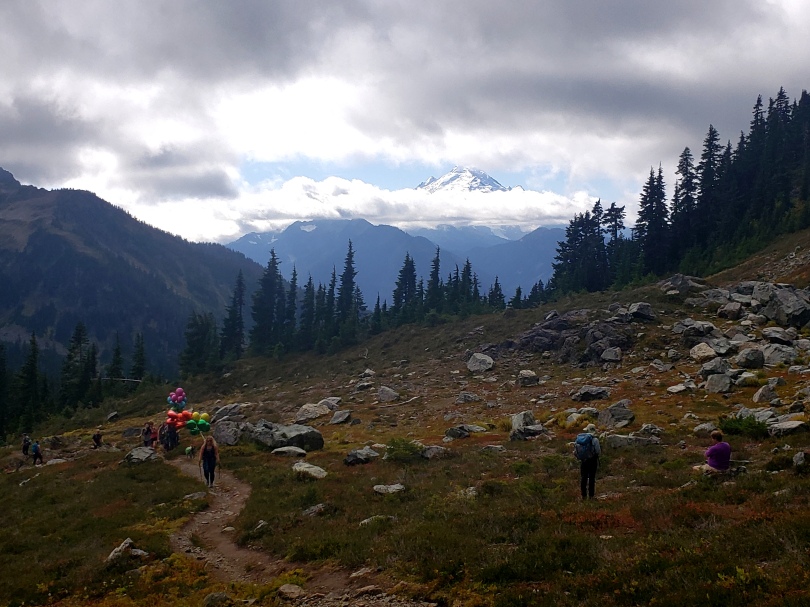 Here come the balloons! Baker peeks above the clouds. 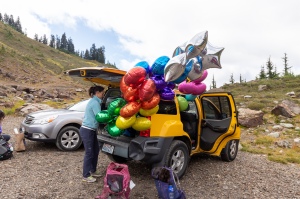 Yeah, we took over a lookout. I almost felt bad, but everyone around us was pretty nice and patient and there weren’t many people because the mountain gods decided to wrap us in fog. To make the colors really pop, I assume. Thanks guys.

Eva had planned this crazy surprise from scratch maybe two weeks in advance. Like two dozen people coordinating formal wear, balloons, blueberry tarts, carpools up one of the worst roads in the cascades, how to get everyone there on time despite everyone being chronically late… amazingly it worked out.

I got to the meeting spot at 9:45. Everyone agreed to meet at 10. They all went to the Wake and Bakery (heh) beforehand, but I was out of cell service so I assumed they were wrapping up and moments away. But then it was 10, and then it was 10:15, and then Emily rolled up so at least I had company, and then it was 10:30… and finally everyone was there. We shuffled gear into the cars of those willing to take on the burden of driving to Twin Lakes, and headed off to the trailhead. 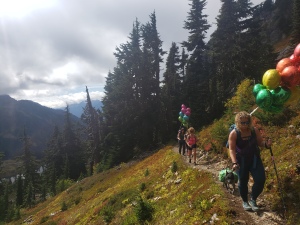 The procession of the balloons

My car had about 40 balloons, which I figured would be enough to float us to the top. But it wasn’t, and that meant we had to actually face the road. Turned out the road isn’t technically that bad, just some small washouts. The scary part is the steep drop and the fact that it’s one lane. And I didn’t want to back that shit up (back up that shit?) in my manual transmission xterra, which, as dope as it is, doesn’t even like reversing uphill in a city. I need two gears for reverse in that car. Amazingly, we only had to pass two others, one that was a little spicy with like 3″ of space (Emily was like uhhh don’t go any farther this way…) and one where Emily and I both laughed and cheered because we passed them on a nice wide beautiful switchback. And suddenly we were at the trailhead!

Each balloon can lift ~14g, so they helped a bit with pack weight

It took a while again to get everyone organized (party decorations, balloons, kids, dogs, debating turning cars around to hide obvious bumper stickers that would give us away) and finally we were on our way. I stupidly signed “EVE – PARTY OF 12” in the trail register. Thankfully, Eva had the foresight to guide Stephen away from the register so my idiocy didn’t give us away.

Meanwhile, we scampered (slowly) up the trail, taking blueberry breaks, pictures of everyone with their balloons, making bets on whether we’d have any views at the top. We got to the lookout and started setting up. Splitting up helium balloons (which don’t float as well at 6000ft because of the lower air density), recruiting the kids to blow up normal balloons, taping streamers across the ceiling, hanging up birthday signs, putting out the alpine blueberry tarts that Becka made, eating everyone else’s snacks because my snacks were mediocre at best: 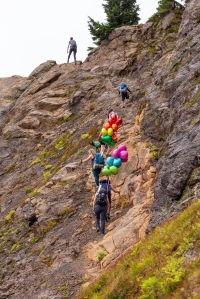 My favorite on the balloons

Yeah, I hadn’t been out since like mid August. I wouldn’t have starved but I mean… I’d need a certain level of desperation. Anyway, we finished up the decor just as Eva topped out, a few minutes ahead of Stephen. We scrambled to get the last of the balloon inside, eventually shoving them in the door and closing it while we tried to get the strings loose (I can untie them!! Wait! I can’t untie them!! What happened to the strings?! DOES ANYONE HAVE A KNIFE?!” I dodged inside worried Stephen was coming around the corner and snuck the knife to Eva, who finally cut the balloons free and turned around innocently just as Stephen crested the final incline.

I am still like a child playing hide and seek, suddenly I have to use the bathroom but I know it’s just the anticipation. Don’t turn around. Don’t make eye contact. Stephen of course immediately starts heading in the wrong direction. No don’t look. We hear Eva trying to corral him towards the door. He finally turns around like okay fiiiine i’ll look inside first. 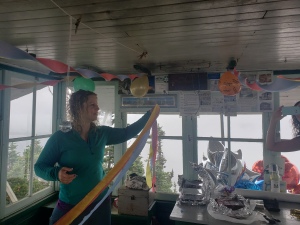 “SURPRISE!!” Those bastards going rogue, we had agreed to say happy birthday! At least, everyone except me seemed to be on the same page, and that page said surprise and I had just missed the update memo so I said more like “hhhhhhaaPRISE!” Stephen just goes “oh, hey guys??” and we can see the wheels turning. “Oh there are lots of you!” “Oh oh wow you even decorated!” and we’re all laughing and clapping and HE HAD NO IDEA. I figured he’d at least have a feeling he was getting into something, just not the full scope of what we had pulled together. But he was completely clueless.

We had blueberry tart, whipped cream, whiskey, champagne, sang happy birthday with Eva on ukelele, and caught up on just how Stephen had no idea. He said everything suddenly made sense. Why Eva was waking him up early. Why Eva was rushing him out of the house. Why Eva dodged the trail register. Why Eva was dragging him up the trail so fast. I can’t believe the numerous WHC stickers (and bright yellow car) didn’t give us away. I was worried they’d even catch up to us, because we were pretty behind schedule too!! But everything went smoothly.

Balloons make it easy to find your friends

We eventually took down the decor and headed back to the trailhead, stopping along the way for formal photos. Eva and Stephen do this thing where everyone brings up formalwear and changes into it at the best viewpoint, and we found a great outcropping on the way down that wouldn’t block the whole trail but also had a perfect backdrop. We froze in the cold and the wind in bare feet and semiformal dresses but it was totally worth it for the laughs and the pics. And we were still back to the trailhead before sunset, which is great, because it meant we could drive the shitty part of the road in daylight, instead of hugging the road next to the abyss for 2.5 anxiety inducing miles.

Great day, great company, and even the long drive didn’t bother me (it helps having company – thanks Emily!!). The days like this are just as good as the crazy climbs and runs. Happy birthday Stephen!!

HAPPY BIRTHDAY STEPHEN! (don’t judge by this streamer THE REST WERE PERFECT)

P.S. I used a couple of Ken Poore’s photography. They’re easy to spot in this post. You can tell by the way that they are. By which I mean they’re brighter, sharper, and better composed than my poor phone’s attempts at making clouds look okay. You can see the rest of his (more epic) work here: https://www.kenpoorephotography.com/