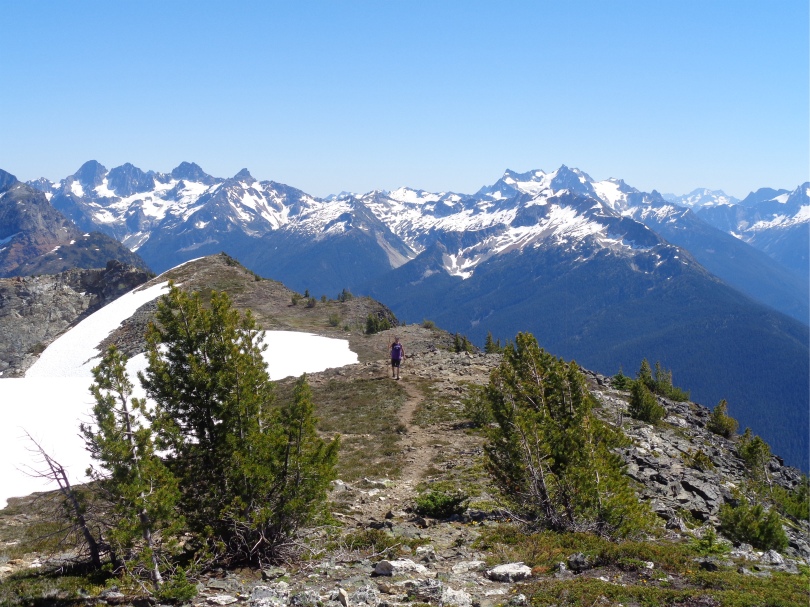 Andy coming along the final ridge

Cats making sure my pack is ready

Ruby Mountain was straight from my OG hikes list. Chosen for its neat location as an ex-island in the middle of the Cascades off highway 20 with 360-degree views, I had always wanted to hike it but never made time or wanted to put in the effort or had people willing to go. Well, enter Andy. Andy has come with me on a few burly hikes (see Arrowhead Mountain snowshoe, or Marmot Pass/Buckhorn). So I thought maybe… maybe he would be the right person for Ruby.

I woke up at 5:30, proud and impressed that Andy had committed to a 6am departure. I fought the cats off my pack, We rolled up to the trailhead around 9am. Shockingly there was a TON of parking. I had been worried after driving past Colonial Creek Campground last weekend and seeing it be a total mobscene, so I was relieved we could park 12ft from the trail. We knew it would be a long day but we weren’t sure how long. Oh, we can usually average 2.5-3mph, it shouldn’t be too bad. “How much elevation does it gain?” Andy asked. I looked at the ground. “Uhh… about… a little over 6000ft.” “SERIOUSLY YOU INTENTIONALLY OMITTED THAT DIDN’T YOU” uhh… yes, and also yes. 6300ft. So… we should start walking.

The first ~2 miles are flat along a wide, well maintained trail. That’s great, except that means you gain the 6300ft in fewer miles. We passed some happy backpackers on their way back from Thunder Campground, admired the blue gatorade color of the river, crossed the beautiful bridge over the creek, and started to gain elevation. Still in the woods, we crossed pretty creeks and chased peekaboo views across the valley. Andy picked up his first walking stick, Pole Walker. And then abandoned it later for Patstick Mahomes, announcing you should not name a walking stick until you are positive you are committed.

The first good views are at Fourth of July Camp, and beyond that you go back into the woods getting to the pass, which is fully tree covered, and feels downhill from the camp. Come on stop making me wait for the elevation. From the pass, you turn onto an unmaintained trail (signed as such) that is possibly the smoothest, most reasonably graded, most maintained unmaintained trail in the entire park.

Aside from that, get ready to do high knees over fallen logs and walk along trees to avoid the high knees. My legs were already shattered from the prior day, and my adductors were screaming with every high step I had to do. Andy started talking about hamburgers, some fast food burger that’s actually a stack of 5 burger patties and I finally stopped. I NEED FOOD AND I NEED FOOD NOW. I crushed a half block of cheddar cheese, a bunch of pretzels, and a cookie, and felt like a whole new person. Bring on the downed trees. “I need a distraction. Two actors, six degrees of separation.” “Okay, uh… Jessica Lange and Will Smith.” And then I get to listen to Andy figure out how to connect those two within 6 movies and overlapping actors/actresses that I may or may not have ever heard of. We also played the country game but with animals (you name an animal that starts with the last letter of the animal the prior person said). I got stuck on T (hint: tiger) but eventually won (undeservedly) by throwing out “ibex” and it turns out there are no casual animals whose names start with x. And the only reason I went with ibex was because I wasn’t confident an ibis was an animal and not a color or a pokemon or an Egyptian mythical creature.

The grade of the trail blew my mind. This had to be a real trail at some point. Climber trails don’t do this. It was so mellow until like the last 500ft. We started breaking out of the trees FINALLY around 5,800ft, and admired the increasing views as we gained more elevation. Patches of wildflowers started popping up! The Snowfield and Colonial groups glittered across the valley, and the ridge and glacier running from Buckner to Boston/Sahale to Forbidden stood at the end of the valley. And finally we broke out into switchbacks through a gorgeous meadow with aster, lupine, heather, yarrow, flow, and even the occasional indian paintbrush (which we are now calling prairie fire). Our pace slowed drastically as the camera came out. Oh, and we also started baking in the sun. And getting bitten by mosquitos. And getting dehydrated since there is no water after the pass. We stumbled upon a patch of snow just above the trees and immediately shoveled it into our water bottles to melt. We also stashed some water for later so it would be cold and crisp (a la Canadian Fridge). 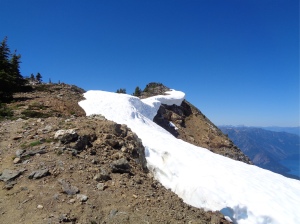 Melting cornice along the ridge

The switchbacks through the meadow eventually traverse to the west side of the mountain, where the trail turns “unceremoniously straight up,” which is an accurate description. It’s the type of scree and heather where you kind of which you had crampons. But there are social trails you can find that aren’t bad, and it’s only a few hundred feet to the final ridge! And the views! Shove some more snow on your face to cool off and keep moving. “Is that where we came from??” Andy pointed at the valley below. Holy shit. Yeah, that’s where we came from, and where we need to get back to… sorry knees. You can do it. Hang in there. Good thing Andy found Patstick Mahomes. 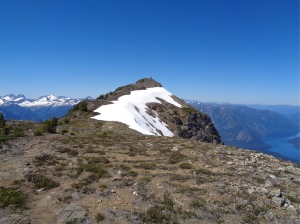 The ridge is a fantastic mellow walk over to the summit, which has a radio tower for park ops. “Oh you’re going all the way up there?” Yes. Yes I am I didn’t gain 6250ft only to bail on the last 50ft and neither did you. The views are astounding. Diablo and Ross Lakes are very different colors, and there are snow capped peaks in every direction. At one point there were plans to build a tram to the top, and while I am glad that didn’t happen, I completely understand why Ruby was the chosen peak. We sat next to the radio tower and Andy popped open some cider from Blue Mountain Cider and it was hands down the best cider I had ever had. Super crisp and tart and refreshing and everything my body wanted in that moment.

You know it’s a good peak when  you don’t know which direction to take a panorama. I messed up a bunch before saying screw it it’s like 3pm and we need to head down. Luckily, walking down tends to be faster than walking up, and I snapped some photos of Andy singing softly as we descended the crappy kitty litter and scree and soon enough we were back at the snow patch to refill water bottles and chug our cold water stash. From there we slowed a bit negotiating blowdowns again and slapping mosquitoes, and soon we were back in the shady trees.

Andy singing on his way down, Snowfield & Colonial group in the back

We hit the pass pretty quickly thanks to mosquitoes and thirst, and cruised back to Fourth of July camp. At the first stream, we debated the pros(?) and cons of giardia, and whether we should drink from the stream or suck it up until we were at the car. I was rambling about work grievances or something else largely insignificant compared to the size of the mountains and valleys we were tromping through and the beauty surrounding us, and I caved and dropped my pack to grab a drink when I hear “Ohmygod. Eve.” I look up at Andy. “There’s a bear right there.” 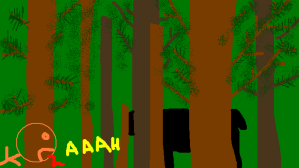 I’VE NEVER SEEN A BEAR. Years of doing this shit like EVERY WEEKEND and they must smell me coming or hear me coming or maybe I’m wildly oblivious but doesn’t matter, I’ve never seen one. This was a vanilla bear, maybe 100ft away, good for bear beginners like me. I tried to get a picture but he moved behind trees too quickly, so I present you with this incredibly realistic microsoft paint rendition of the situation and my reaction.

When it was mostly obscured I figured time to start moving before it got closer, because I don’t like wildlife or the forest and definitely not massive wildlife with claws and teeth and muscles and the ability to run 30mph. We debated the best way to evade a bear should it start chasing us. Zigzag? Follow trail/switchbacks? Cut all the switchbacks? How well can they pivot? Would their momentum carry them past the switchback? Fortunately, we did not have to find the answers to these questions, because the bear didn’t give a shit about us. We did find this camera strapped to a tree that we didn’t notice on the way up, so I took a picture of it taking a video of us because that’s only far. I have not found any write-ups of what it’s actually for, but I imagine it’s for some wildlife study.

We popped out at the trailhead around 7pm, 10hrs round trip. Not too shabby. And the gpx track? 19.4 miles. 17miles my ass, WTA. Hilarious that we thought we’d be back in time for beer at Birdsview Brewing but I told Andy I swear we can do another trip that’s not like 20 miles and 6000+ ft of elevation gain. We chugged more water and whined about our sore feet and basked in the comfort of our flip flops. 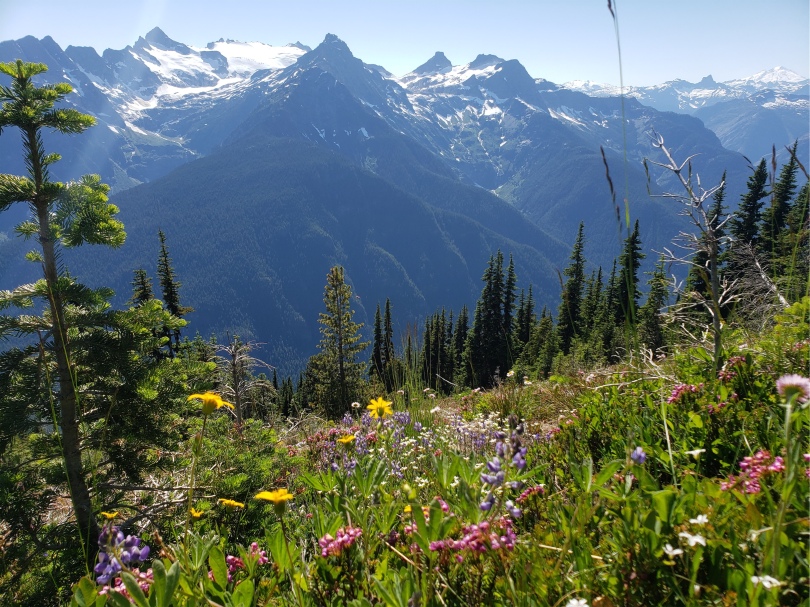 One more of the meadows!