This hike is a double win. Beautiful lake and beautiful peak all in one trip, though I’ll admit the effort to scenery ratio was pretty high in the beginning. Hiked 10/13/2014, definitely a good fall hike. 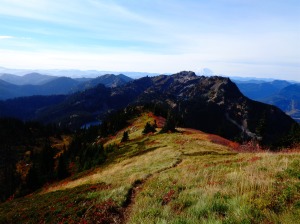 View down the ridge, plus Rainier

Somehow, I severely miscalculated time and ended up power-hiking/running this entire trail to avoid being late for work. I debated turning around at the lake, but figured I didn’t get all the way out there to not make it to the peak, so I pushed on and figured I’d just go straight to work with the help of baby wipes and perfume and a change of clothes. The first mile or two were flat, so those were a piece of cake. But after that, it’s up, up, up. There are a few waterfalls along the way, but nothing really spectacular until the lake itself. At one point, I realized I smelled burning, and suddenly was surrounded by a smokey haze. I freaked out, and worried that I was in an area where the underbrush was burning and I just hadn’t realized it (okay, I had been reading forest fire survival stories the night before). Turned out someone left a campfire going (I yelled around for people) that I took the liberty of putting out. I didn’t see anyone for hours, so I’m assuming they left and didn’t put it out all the way and it reignited and started spreading. Guys, that’s how forest fires can start. Come on.

Anyway, after lots of steep switchbacks (several of which I hiked right past – pay attention! I space out too much sometimes), some slick rock to scramble over, and a few small waterfalls, you arrive at Lake Rachel. Which is beautiful. It looks like a Carribbean coast. Talapus and Olallie were cool, but this was unbelievable. I’d have been perfectly happy turning around here and having time to take pictures and just take in the scenery, but of course my pride forced me along the side trail going up to the ridge.

The trail up to the ridge was much narrower and just as steep. There were a few areas where you had to scramble over some rocks, one of which was in the middle of a switchback. Took me a while to figure that one out, since it looked like there was a stick blocking it (the WTA volunteers will usually put branches across paths that are out of commission or just the wrong direction) but I think the branch just fell and rolled that way, because the only path nearby was the one that continued a few feet up the boulder. But after fifteen or 20 minutes of that trail, I popped out along a ridge and the trail came to a T. To the left is Rampart Lakes, to the right are Alta and Lila Lake, which (I think) is in the basin below Alta. Go right, until the trail splits again, and then bear left, which goes up to Alta.

Rachel Lake down below

The ridge is very exposed, and it was crazy windy and quite cold. I unpacked all of my layers and put them on (gloves!), and wished I had brought light pants. But the views were worth it, not to mention the Vitamin D that Seattle so frequently lacks. Here’s Rachel Lake from above, just before I started running along the ridge. “Hauled Ass” I believe is the correct phrase for what I was doing. Didn’t have much time to enjoy views, but that ended up being okay since it was freaking freezing anyway. The foliage was still pretty bright, which was a pleasant surprise since I thought fall was nearing an end. 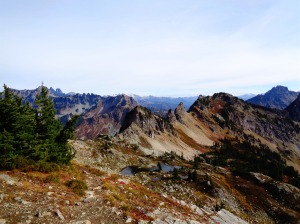 The higher up I went, the rockier it got. Most of the surrounding peaks were craggy, which I imagine will look cooler with a dusting of snow. I could see down into the basin, where Lila lake was. If you look closely, there are some snow capped peaks peeking over the closest ridge. No idea what those are. If anyone knows, comment. Next time I go back, I’ll hopefully have more time to explore Lila and the Ramparts, which I hear are beautiful. But like I said, I was busy trucking it trying to get back down in time, so I turned around pretty quickly. But not before snagging a picture of me pointing at Rainier. Too windy for ten second timers, so I had to settle for an actual selfie.

Going back down was brutal. Plenty of pounding on the knees, knowing I had to go fast to make it back in time, trying to regain feeling in my frozen fingers. Running down the ridge warmed everything up quickly, but once it got too steep to run that’s when I started getting (this is shocking) bored. I’m an impatient person, and going down all of those switchbacks with no views or time to just enjoy where I was led to boredom and impatience. I wiped out and slid down a rock, covered in mud, so that was cool. A second later, I heard a bunch of clapping. Though someone saw my slip, but it was actually a hiker who thought I was a bear until he saw the neon pink jacket. He was clapping to scare me off, and when he saw me he just said “holy SHIT Ithoughtyouwereabear” with a huge look of relief on his face. Glad I sound like a bear. I’ll take it as a… compliment…? He had a fishing pole, so I guess there’s some life in Rachel Lake! I wonder what lives up there. And if it freezes over. My questions are getting redundant. I need answers.

One last view of the basin

I ran into a few others on the way down (a tourist family shocked they had another half hour of vertical before the lake). It warmed up as I was going down, the campfire had not reignited, and I ran the last two miles and made it back to the car in time to stop at home. I double-parked, threw on the hazards (hazards = free parking), spent 5 minutes in my apartment grabbing food (thank god), hopped back in my car and was off to work. When I walked in the door, my boss asked if I wanted to go on early. I thought he meant 10 minutes early, since it was 2:50, and I said yes. Turned out, I didn’t have to be there until 4. And I woke up the next morning more sore from Alta than I had been for my 18 miler a few days prior. But you know what? It was worth it. My real regret? Not jumping into Rachel Lake. Oh, the things I could have done if I had known I had that extra hour.

Trail going through fall foliage along the ridge