If you’re looking at the Olympics from Seattle (for example, from my lovely roof deck), the rightmost peak of the Olympics is Mount Townsend. I didn’t realize this until the day after I climbed it, when I happened to be looking at a labeled picture of the skyline viewed from the city. This was a combination of Mount Townsend and also Welch’s Peaks, which are along the same ridge as the summit of Townsend. 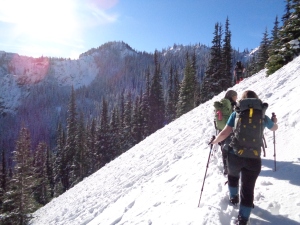 The group crossing a small slope

I made a spontaneous decision (as usual) to join a meet up group for the first time. I had never really attended a meetup event before, but this peak was tempting and the group seemed open to allowing me to tag along as a newbie. They’re all seasoned hiking/climbing veterans, and I was quite literally the impulsive kid along for the ride. Perfect learning opportunity.

I left Seattle around 6am, picked up Selena (another hiker), and we met Woody and Tanna at a WalMart and carpooled the rest of the way. On the way, I got stories of mishaps, rescues, slow inexperienced newcomers (hopefully not me), just a taste of what they’ve experienced before. I only had a small bag so I worried I looked underprepared, but I had everything I needed. The only piece I was worried about was my sunglasses, which were cheap freebies from the Cushe rep that he had dropped off at REI a week earlier. Glacier glasses were (and still are) in the mail.

Clouds moving in from the left (east)

When we started, the trail was completely free of snow and it was sunny. The road was also paved all the way to the trailhead(!) which made for easy going. I had never been to the Olympics before, and the forest felt completely different from the Cascades. For starters, rhodedendrons everywhere! We weren’t in the rainforest part of the Olympics since we were on the far east side. The first bit of the trail is through the woods, though eventually you have some short breaks on open slopes before turning back into the trees. There was a thick patch of clouds coming towards us, and we figured we’d get to the saddle and decide based on visibility whether we’d do the summit first or the lower Welch’s Peaks.

The best thing from the start about hiking with these three was the sheer amount of knowledge they had about our surroundings. Woody and Tanna had done this hike many times before and knew exactly where to go even with the trail completely covered in snow. They all had extensive avalanche experience, and were able to explain why we were crossing certain slopes, things to look for to evaluate conditions, weather patterns to consider. I had read much of the advice, but it’s completely different when you’re hearing it explained in the actual wilderness. I have “beginner’s bliss-” I haven’t had anything scary happen to me yet, so I’m generally oblivious of the possibilities, though I try to be aware of that fact.

There were slopes we crossed that were definitely avalanche terrain, and a few I’d never have crossed alone. I’m impulsive, but I’m a chicken. Okay, maybe I’ve been reading a few too many books about K2 lately. And just read an article about an avalanche on Granite Mountain. Which is one of the most popular hikes out here. Most of the slopes on our hike were small, and we didn’t even see a slide happen. 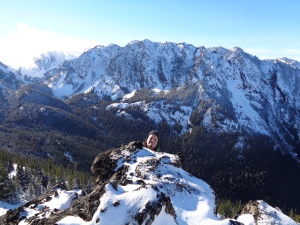 I couldn’t resist. Views behind me to the west, which was the clear side.

Once we got to the saddle (after many switchbacks) we figured we’d do Welch’s first. Townsend was in and out of fog, so we scrambled to the left to check out the lower areas first. The valley to the east was full of clouds, but to the west, it was completely clear. The clouds made it an unbelievably beautiful scene. I’m still not over how cool it looked.

We scrambled a short way before the boulder wells got too deep to deal with and we decided to head over to Townsend. Woody scouted out a route across a slope that we could traverse to avoid some more serious scrambling, and we followed his lead. 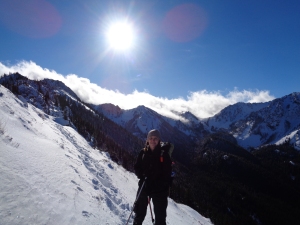 Risky picture, the clouds looked incredible from below just peeking over the peaks

In places, the slope was fresh powder on top of a sheet of ice. I was warned to kick steps very carefully, and I remember following Selena’s every step (Selena, if you’re reading this, thank you!!) and trying to kick in just as slowly and mindfully as she did. It was like being an eager five year old eagerly learning from the big kids. I’ve kicked steps often before, I have no idea why this time was different. Probably because I had people to learn from.

Selena coming up the ridge

Tanna pointed out that in general on a slope like that we should have ice axes just in case (it was exposed and a little steep) and Selena pointed out that in powder, the axe wouldn’t exactly help much. Luckily, some of our steps kicked down to shrubbery, which made it a bit easier, and soon enough we were on the ridge.

The ridge was gorgeous. I’ll have to go back there to run it in the summer. There’s a trail that goes along the entire ridge from the scramble to the summit and then beyond. Turning around and seeing the clouds on one half spilling onto the clear side was stunning. When we set up for snacks I had the brilliant idea (no idea how this didn’t occur to me months ago) of just taking a video and speeding it up once I was hope. Color wasn’t great because of glare and my point-n-shoot’s stark lack of adjustability, but it’s still pretty cool. And with that, I present to you my first time lapse!

Moon Cheese was my snack of choice. Turns out REI just started carrying it, which means even more of my paycheck will be going back to my employers. REI: Recycled Employee Income. That’s the joke among us. And it’s too true. I had a ton of tea and several oat bars and a kind bar. I had enough food to last me a solid day or two up there. So I chowed down. At one point (I didn’t get a good lapse of this) the clouds moved in just enough to cover everything except for a small peak, and we could have been at 22,000ft. Looking past the snow and rocks out to clouds with a peak sticking out in the fog. 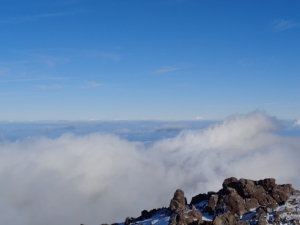 Baker poking up over the clouds

Oh, and the entire Sound was covered in fog, as were the Cascades. With the exception of Baker, which we could see just poking up over the top of the clouds. We spent maybe 45 minutes just admiring views from the summit before heading back down. 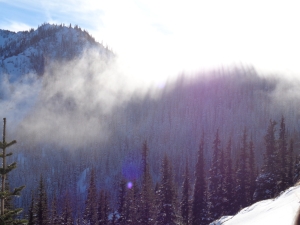 Sun streaming through trees and fog

Back down into the fog, which had enveloped that side of the ridge. We went from being above the clouds in a blue sky, sunny day to what felt like a different world.

Cloudy with no sun, still a pretty hike, but not as stunning as it had been with views. But like I said, the clouds along the ridge felt like a one-time experience, and descending in clouds was a fair trade. We got back to the car quickly, piled in, and headed back to Seattle with a short stop for tea and ice cream (or milkshakes, or quesadillas, or whatever you so desired) on the way.

Topo map of the hike

Oh! In addition to the time lapse, I also have… our first topographical map of the trail! What! I tested a running app, Strava, that allegedly worked in the mountains. Success! It wasn’t 100% accurate (we compared it to Selena and Tanna’s GPSes) but hey, it’s close enough for my purposes. It was off by about 200ft of elevation and .1 miles, but the path is fairly consistent considering how relatively infrequently it tracks your coordinates. Here you go! More info about elevation is here. Unfortunately you cannot download it or zoom in (I just discovered that) but you get an idea.

This was an unbelievable trip. I hadn’t gone on a completely new hike in a while, and it was refreshing to feel adventurous again instead of repeating the same hikes I had already done. I can’t thank the Peaks group enough – it was a perfect first introduction, and I hope they schedule more that I can go to. It’s great fun hiking with people who know so much more than I do. It makes me realize how much there is to learn, which, if anything, just fuels the desire to get out there even more. So if you’re reading this, thanks guys! 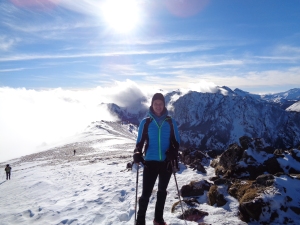 One thought on “Mount Townsend”