Capital “B” capital “N” type Bad News. The blog will most likely be on hiatus for a while due to a lack of transportation. I was unfortunately rear-ended (sandwiched between two cars) on i-5 a few weeks ago. Sadly, I had been on my way to climb Mount Saint Helens. What I thought was a fender-bender ended up being two new bumpers, a new trunk, new side panels since the back of each was warped, and a new seatbelt, which apparently added up to a totaled car (sorry folks, I’m not exactly driving a benz out here). And the bastard who hit me drove off when he realized the extent of the damage. So here I am, shackled to the concrete jungle on account of some bum who is probably freely whizzing around in his bigass SUV with nary a scratch on his shiny, chrome grill.

Anyway, my priorities are out of line and last Friday I caved and rented a car to take advantage of the sunny weather. Really, it had to be sunny and gorgeous for the first two weeks that I had no car. But hey, I’ll put part of my retail paycheck into a rental if it means getting out on a great day once every week or two (to think I used to be out there 2-3 days a week, damn).  What I forgot was that renting a car leaves me at their mercy: if they open at 8, I get a car at 8. I can return it first thing the next morning and have it count as one day, but I can’t pick it up the day before, use it the whole next day, and return it first thing and have that called one day if that makes sense. So I had to either leave after 8am or be back by 6pm. Okay, I’ll leave at 8am, that’s the safer choice.

So, 8:05 I stroll into the Enterprise a few blocks away and luckily they had a car ready to go, which apparently is rare. Sweet. And the woman who helped me was the daughter of my college chemistry professor back at Northwestern! She saw my last rental was in Evanston and we chatted. Ha, small world. Anyway, I’m sure I looked hilarious walking down the street with my ice axe, snowshoes, microspikes clipped to my day pack, the works. It was game time. I dropped everything in the trunk of a shiny new Hyundai Elantra and got behind the wheel and realized shit, there are no gears, how do you know if you’re in drive!? Does something on the dashboard light up if you’re in drive? What do I do with my left foot? Nothing? Oh, no, the light up letters are next to the stick, okay. No clutch, just… put it… in… reverse… and now drive… and… that’s it. Great, I was on my way. Aside from instinctively trying to downshift the first few times I came to a stop light (and every time I exited a highway), it was smooth sailing. No left-foot-braking over here. 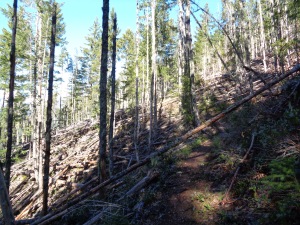 Could be a summer trail

I arrived at the Sourdough “trailhead” around 11am, which was maybe four hours later than I’d have liked but hey, rentals. This was only the beginning of my problems. I found the sign for the trail, but where the hell was the trail? Someone had told me to “just start walking and you’ll intersect with it” so that’s what I did, until I was still bushwacking after 15 minutes and turned around. The trailhead is to the right of the building! A solid 100ft from the sign! After that wasted half hour, I was eager to get moving.

It was unbelievably warm and sunny, and I wondered if I’d even need the microspikes. Snowshoes were certainly overkill, but I wanted to put my new day pack through some rigorous activity. I’m product-testing a new pack for REI (which has been less fun than I expected now that I have no car) so I figured I’d keep the snowshoes.

The trail was up. And then up some more. And again. Turn a corner, more up. Much of it looked like second-growth forest, and between the sun, the ridiculously warm weather, and the green, it could have been a summer hike. I expected to go off trail around 3800-4000ft, so I was keeping an eye on elevation gain and topographical features. You get sneak peaks of the surrounding mountains, and boy did it look spectacular. I couldn’t wait to get up to the Stetattle Ridge. Alas, after weeks of no hiking and sporadic running, I am not in marathon shape anymore! My ass is slow. And I lost the snowbaskets on my hiking poles. But it was great to just be out again, especially in an area I was so unfamiliar with. I had done hikes that got me close to North Cascades National Park, but I had never been within it! I didn’t know any of the surrounding peaks.

View from my tea spot

My unfamiliarity led to a classic rookie mistake. Rather than following the maps I had laid out of the winter route, I found a bunch of footprints and decided to give those a shot instead. They’re more likely to have experience with the area, right? We’ll just see where they go. Well I imagine that eventually they ended up at a saddle between Sourdough and the ridge I was aiming for, but I didn’t have the time to find out, and they got tricky to follow after a bit anyway. These guys had been post-holing alone a relatively steep slope through trees the entire way, I can’t even believe they made it as far as they did. When I hit my turnaround time, I headed back to the boundary between the national park and forest and sat on a log looking over a valley for snacks and some tea since I clearly wasn’t going to make it to the actual ridge without descending in darkness. Which I considered, but given my luck thus far, I probably shouldn’t push it.

Hiking in the day pack

Plus, my day pack was not impressing me. At all. In fact, it had gotten quite uncomfortable. Yes, I overpacked it by every definition of overpacking (the snowshoes were strapped onto the outside with an ace bandage because I was “resourceful” aka “too cheap to buy a real pack or bungee cords or cut my 50-yard-rope”) but I didn’t think it’d be that bad. It was probably the snowshoes that pushed it past its limits, since everything else fit inside. But the thin straps were digging into my shoulder and the hipbelt did nothing with the weight of the pack besides keep it from bouncing up and down when I hiked. The chest strap pulled the weight forward which was nice, but it was still centered on my shoulders, and I was starting to feel it. But it’s more versatile than the pack I’ve been using, at least, which doesn’t have any outside straps or hip belt or chest strap.

When I first stood up from my snack I was discouraged. Bummer to go all that way to not make it to the top, but you can’t win em’ all, and I’ve had some great hikes out here. The way down went much more quickly than the way up. Well, quickly at first, until I realized a song was popping into my head. “Ey yo Vanilla! Kick it one ti-” No. No! I did not come here for this! It was worse than hustling down Alta Mountain with “It’s Raining Men” in my head and that was pretty bad. Luckily I was down in about an hour and a half – if I had known, I’d have played around a big more at the top – and this fancy rental had an ipod jack (whoa) so I could listen to anything I damn well pleased. And clouds moved in as I was descending, so I don’t feel like I missed out on much. I managed to snap a pic of the day pack in use (okay, I could have tried harder) but I’ll have to take it on a few more excursions. I took it for a few runs in Seattle and it was actually fine for those, though I didn’t pack it with much at all. But this time, I was relieved to take it off back at the car. Though I couldn’t help but think it should have been my Accord waiting at the bottom.

I will definitely have to head back to the Stetattle ridge area if the weather clears up again, maybe in early spring. I’ve seen pictures of groups snow-camping up there, and it looks absolutely incredible. For now, it looks like we have a solid stretch of rain ahead of us, so maybe I will find some cute cafes to read in and have to live vicariously. Or I’ll be the chick arrested for bivvying in the arboretum.

6 thoughts on “Sourdough Mountain/Stetattle Ridge and some Bad News”