Hiking all day ever day was a nice break from work (I learned that in Washington, you still don’t get overtime pay for shifts over 12 hours), so it was a perfect time for a mini vacation and a week of spoiling myself with a rental car. It’s amazing how you can have a vacation here without even leaving the state – that’s not something I really considered back in Illinois!. This hike was on Saturday, the 14th, and though forecasts called for clear skies, we got plenty of cloud action.

We spent some time deliberating Friday night between Green Mountain, off the Siuattle River Road, Dickerman, and Forgotten. Dickerman I had done so I wasn’t too keen on it, though it would have been the safe choice. Green Mountain was a stretch: Dave was unfamiliar with hiking small mountains in snow, and I was unfamiliar with the area around it. So we ended up going to Mount Forgotten, in an area I know well. I’ll admit, I never expected to make it to the summit, but I figured it would be a good recon trip for future attempts on the peak. Avalanche conditions were moderate, and while I didn’t realize just how steep the saddle up to Forgotten was, I knew it’d be a tricky one. I also didn’t want to be stuck navigating off trail in thick clouds in several feet of snow if that was how the weather turned out.

Mt. Forgotten from the meadows

We parked in the Dickerman lot again, even though now I’m positive you can save a mile from the hike if you park by the road. I don’t have a good reason for skipping it. The highway was covered in those low fog clouds, but we figured we’d do Perry Creek/Forgotten Meadows anyway since at least the valley would have waterfalls and the like, whereas with Dickerman, you’re just doing steep switchbacks through forest for a while. I had previously made it about a mile past Perry Falls, but never beyond that, so this was also an opportunity to cover some new ground!

Peak peeking out from the clouds (ha)

Clouds moved in and out, we got stuck in a few minutes of rain here and there, but the trail was completely snow free. Not even a trace. It’s a fast hike up until the falls, and the only thing that slowed us down was that the clouds were occasionally giving us glimpses of a peak next to the Big Four (which were consistently covered by clouds) and I’m obsessive and had to us every opportunity to get a picture in case the clouds changed.

I did mark the washout where those zeolites were last time I did Perry Creek. It’s almost exactly 1.5 miles into the trail from the Dickerman parking lot, so go check those out! You can also scramble up (okay, more like hike over big rocks off trail, not quite a scramble) to a few waterfalls at the top, which looked neat.

Dave at the top of the falls

Perry Falls were much easier to pass this time, and we didn’t need to utilize the huge tree. After that, it’s two miles through forest! Every once in a while the fog turned into that sunlit fog that brightens everything. I got a picture of Dave next to the enormous tree that took out five switchbacks. 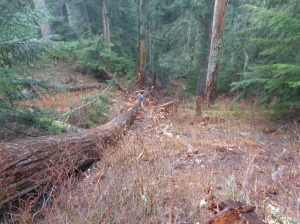 This part of the hike was reminiscent of Dickerman in terms of difficulty, but with a much more open forest. After over a mile of that, the trees thinned, and we crested a ridge. Snow! Finally! We came to a small clearing overlooking the northwest side of the ridge. Dave looked unimpressed. “Is this the meadows…?” Fortunately, no, we still had a little under a half mile to go. The trail is lost at that point, so we followed the ridge through some trees and eventually to some footprints through snow. Oh, and we experienced three damn seasons within half an hour up there. Cloudy, then rainy, then snowy for a few minutes, and then some glimpses of sun. Yay, mountains!

We made it to the flat area just before you descend the ridge next to Forgotten, and met a couple there who had the same idea as us. They said the slope looked too dicey today, and if they weren’t doing it, neither were we. My logic taking people hiking is if I wouldn’t solo it, we aren’t doing it, unless the person I’m with has way more experience than me. If I’m not confident saving your ass, I’m probably not risking mine, unless it’s a safe opportunity to learn. 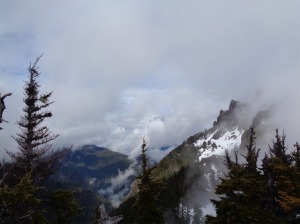 Rather than descend the slope, we climbed up a small peak (hill?) to the left of the meadows to see what views we could get. It was steep, but short, so no worries there. Except Dave didn’t have gaiters. Or poles. And neither of us had ice axes (again, I figured if there was a chance we needed to self arrest, we probably shouldn’t be risking it, so why bring them – same motto I follow solo). He got stuck at one point since he post-holed up to his waist, so I climbed back down to give him a pole and explain how to kick steps. To be fair, we skirted some tree wells, which wasn’t a great choice. Again, me making the mistake of being a follower and just staying behind the other couple we met instead of looking for a clearer route.

At the top of that small peak, we sat down for some snacks. I missed a hell of an opportunity for a time lapse, because guess what! Views opened up! Mt. Forgotten itself peaked out from behind clouds, and the valley beneath it even got some sun. We chatted with the couple about the route to Forgotten, best times to climb it, other peaks off Mountain Loop, and how the hell was the Mountain Loop Highway still open in February?

After 20 minutes or so (maybe longer, I ate a lot) we picked a clearer route down, and rather than post-hole/plunge-step all the way, we made a glissade track. Which is always a blast. I could glissade all day, it brings me back to that five year old sense of excitement! We hiked back to the first clearing, I demanded tea, and we had a few more cloud/sun combo views before heading back through the forest. 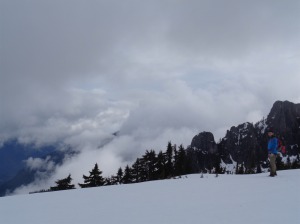 Dave looking out across the valley

Fog moved back in until we were on the other side of the valley across the falls, when things got interesting. Peaks sneaking out again, some rays of sun, some rain, and my favorite: rainbows! Several of them! One was even a double rainbow. I don’t think I’d have even noticed them if I hadn’t been turning around every 10 feet to look back at the valley. Which made it harder to keep up with dave, who would literally be out of sight by the time I put the camera away and started hiking again. But the valley was prettier this time around with the clouds and rainbows, so I couldn’t help it. 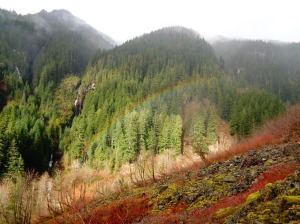 We made it back to the car, and our GPS apps were drastically different. Elevation was about the same (just over a mile up!) but mine gave me 10.7 miles and Dave’s said something like 11.5. I know strava isn’t the most accurate, but I was surprised by that difference. Regardless, here’s a link to the map! Screenshot below.

But first, here’s another picture of a rainbow.

So I’d say overall, a good end to Dave’s PNW hiking. Pilchuk is tricky, but the others we did were easy. Like the ice caves, and Rattlesnake Ledge (group hike for the product testing I was doing) which didn’t warrant a blog entry, though it was a gorgeous day and I’d love to take kids to that hike. And at least now I’ve done it! It’s a classic that had been missing from my experience.

I’ll be back to do Forgotten when conditions are better. It’d be a great chance to camp at the meadows and then hit Forgotten and maybe a few others along the ridge over the next day or two. And it looks like views are phenomenal on a clear day. Dave only saw Baker and Glacier from the i90 bridge, never from a hike! But at least this vacation was like summer for him. The high in Evanston, IL the other day was 4 degrees. 4. I’ll chalk that up under the list of “things I don’t miss.”