Another mediocre day on the west side of the Cascades led me to the Teanaways for my first “legitimate” trail run in months. I’m all about those ridgelines, and chose a short, hopefully dry, snow-free one to run. I also decided to give my pair of La Sportiva Synthesis a try since I have them for product testing. They’re technically hiking shoes, but might as well push their limits. Spoiler alert: don’t run in them. Anyway, here’s Elbow Peak, a nicely exposed ridgeline out on the east side of the mountains! Ran 5/6/2015.

Wildflowers along the trail

I had read some warnings about the 4wd trail beyond the trailhead, but it honestly looked easily driveable. It probably got pretty muddy in the rain, but anyone with any high clearance 4wd car should have a pretty straightforward drive. Most of it was pretty flat, but some areas were deeply rutted. Part of me wanted to drive the road, but I was there for a run, and I didn’t drive two hours to only run a few miles. It had to be at least 10.

There are little spur trails leading away from the road, though they all join it eventually. Once it officially leaves the road, the trail becomes one big rocky rut in sections, which made some stretches to run. Sunny blue skies at first made the wildflowers light up, and there were plenty. The trail was admittedly steeper than I had expected, so I walked pretty routinely on the steeper sections. Motivation to get in shape. Shady sections after about 2 miles in had patches of snow, but nothing that I felt required traction or poles. Which is great, because I brought neither. 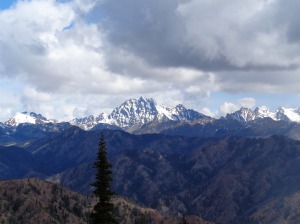 Ingalls and the Stuart Range

Yellow Hill is a hike in itself. It’s about 6 miles round trip, and gives you a small glimpse of Stuart. From Yellow Hill you it’s a ridge walk over to Elbow Peak (about another two miles), and since that’s the part I was looking forward to, it felt like the adventure didn’t start until I was past Yellow Hill. I descended the slope and hit the ridge only to realize the sky was divided in two: crappy weather to the right, sunny weather to the left. Hmm. We’ll see what develops.

Looking towards Elbow along the ridge

I saw my first dust devil too. I heard a whooshing wind sound, and turned around to see dirt, leaves, and debris spinning in a small circle about 15 feet away from me, moving to the left. Freaked me out at first until it dissipated after maybe two minutes of wandering the ridgeline. Some areas along the ridge were rocky, and I dipped below to avoid scrambling since I was on a roll. I kept jogging up towards Elbow, and was there before I knew it. It’s an odd summit, I didn’t totally know where the top was so I tagged few high points and hoped I happened to stumble across the true summit.

And at the true summit, I discovered the Lemahs, Overcoat and Chimney Rock peaks, Summit Chief, and Bears Breast. That’s a skyline that I don’t think I’ve ever seen before, and I was intrigued. I’ve never seen Daniel out of the clouds either. Seems like the Lemahs are pretty remote, but I’ll find time to at least get close to them this summer, and I’ve already got plans for Daniel. I had no idea what the peaks were, so I snapped a few pictures and posted on wta.org hoping I’d get a response. As usual, I did – thanks LDistel! 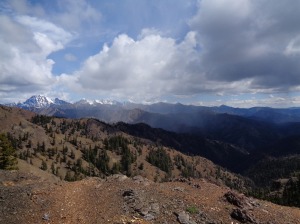 Stuart range with weather moving in on the right

I turned back, and saw the weather moving towards my ridge. Great. I’m going to be running back through the rain. Might as well get it over with. It was still sunny where I was, so I figured it couldn’t be that bad. No one minds a warm drizzle.

I was wrong. Within five minutes it dropped 10 degrees and started hailing. I was still on the open ridge, which was fairly short. Which I appreciated, because as soon as I entered the trees, I heard the crack BUHBOOOOM of thunder. “GOOD!” I shouted and glared at no one, and kept jogging. Oh, did I mention that I don’t bring much when I run? I had some food, a liter of water, and a soft shell.  No rain jacket, no puffy layers, nothing for my legs. Well, maybe it’d be motivation to not stop.

Also wrong. Not even a thunderstorm can motivate my lazy ass. Getting back up Yellow Hill had one steep sections (also rutted) which I walked. Again. I’ll whip my ass into shape eventually. First run back in the mountains I’ll give myself a few free passes. Even Denny can’t prepare me for that type of thing. The hail got harder and the thunder got louder and I finally got back to the road, which was straight, easy running. Except this is where the shoes get shitty. Mud tires on cars are designed to fling the mud off of the treads, right? Well no one thought about that with the La Sportivas. They clung to EVERY PIECE OF MUD I CROSSED until I was running with tractionless bricks on my feet. Misery. But I was surrounded by marble sized hail and thunder and all I wanted was my car and a lemon honey stinger waffle. 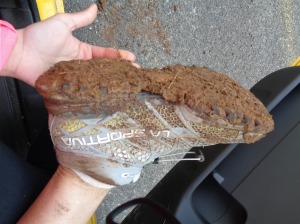 Made it to the car. The honey stinger waffle was pure bliss. I drove out of there quickly, had a few chances to appreciate my mud tires, and got back to the Teanaway road just in time to sit for 20 minutes waiting for a pilot car. Worth it? Yes. Did it ruin my dream of the Teanaways being the land of fun and sun? Also yes. Turns out even the east side gets some rain.

Strava map here. This was my first hike along a trail that was also open to bikes. Honestly, I’m not sure how I felt about it. The deep ruts were annoying as someone trying to run, but I didn’t encounter any bikers which was a relief. And probably had something to do with it being a Wednesday morning. Not a spectacular hike, but a solid run, with a few more ridges to follow had I had time to bag another peak.

Bonus question for any geology gurus out there. What causes the white streaks in the rocks? Is it quartz mixed in with whatever sort of rock the ridge formed from? Seems like they’re harder than the surrounding rock since they always jut out a bit, which I assume means the other rock is wearing down more quickly. 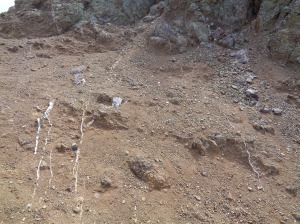 White streaks in the rock along the ridge

Edit: Looks like the white streaks are quartz veins. The minerals are deposited by very hot water (called “brine,” “hydrothermal fluids,” “and a variety of other sciency terms that I’m dumbing down to “hot water”) rising up through cracks in the rock. As the water cools, it precipitates the minerals out along the cooler rock on either side of the cracks. Sometimes it fills up, like what I saw, sometimes it leaves pockets, where you can see the jagged crystals forming. Thanks to Emanuela for putting me on track to do some research!