My second straight day off (whoa, two days, I know) was another brilliantly sunny one, and I packed up to finally do Vesper Peak. This one has been on my list since October. I didn’t think I was capable of it alone back last fall, but I figured by now I could handle it. And it turned out to be pretty damn doable with some phenomenal views from the top: snowy peaks, a few clouds, a lake, and who knew the back of Big Four was so red? Hiked 5/28/2015. 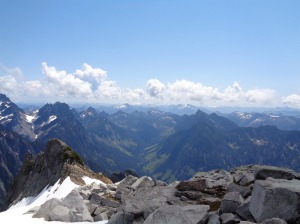 Views from the top: Corner of Del Campo on the far left next to Gothic, Daniel and Hinman way in the center background 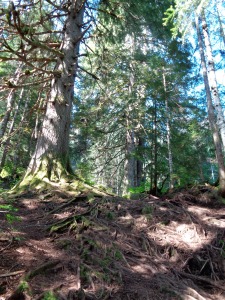 First half mile of the trail

I hobbled out of bed Thursday morning, surprised that I was a little sore from Round Lake. Eh, I’ll loosen up at Vesper, no worries. The drive was uneventful, just a patch or two of rough spots on the road and that was it. The lot was empty, which was fine with me. This was going to be a slow hike, so if anyone showed up, they’d probably catch up to me.

I got all of my things ready and grabbed my boots from the trunk. You know what’s gross? They were wet. As in, still wet from the previous day. Yuck. I could have planned that better. My other option was barefoot trail runners, and I didn’t think those would cut it in the snow, so wet shoes it was! Like a boss. 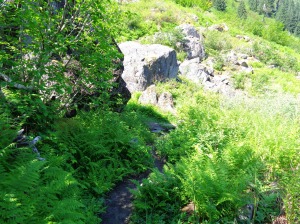 Bottom of the fern slopes

The trail starts out through forest. Not lush green undergrowth forest, but a darker, more spread out canopy type of forest. Flat, which was nice, it meant I did get a warm up before the serious part started. The few stream crossings had moss growing everywhere, and I quickly grabbed a stick to fight off spiderwebs. Without Vernon breaking trail in front of me, I was on my own with those damn weaving beasts. Trusty stick would have to hold me back.

About half a mile in, there’s a tricky river crossing. The Stillaguamish is in your way, and apparently for part of the year it’s just a trickle, but on Thursday, it was a small river. I had to head upstream a bit where I found a large log I could reach by hopping across some rocks, and the log dumped me off on the opposite bank where I could scramble up and rejoin the trail. It took me an embarrassingly long time to figure it out (which probably means like 7 minutes, but it felt like forever). Finally I was across, and almost immediately hit the fern slope, where I remembered what summer hiking was like.

Hot, and sunny, and sticky and full of spiderwebs and lack of shade. I’m a summer person. I’m a sunshine person. Getting sunburned makes me a little excited because it means I’ll be tan soon and whiffs of sunscreen make me miss spending all summer on the beach. I always joked that I thrive when it’s 90 degrees with 85% humidity. And yet, I forgot about stifling heat when walking through dense greenery, or how much water I’d want, or how I wish my damn water was cold. So I revised my statement to the following: I’m a summer person, if there’s an ocean within reach. There are no oceans in the Cascades, so I will have to settle for some glacial lakes. I took a break to water and slather on more sunscreen (learned the hard way back on Daniel) before continuing on. Finally you get back into the woods, where the shade was a welcome relief. 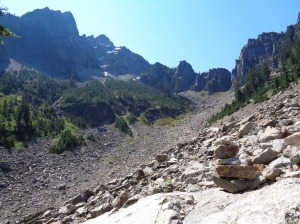 The woods spit you out into Wirtz Basin, where you are soon faced with a talus field and an invisible trail. Basically, aim for the patch of trees slightly to the right. Cairns are the name of the game here. There were always two within sight, except for that time when I lost the trail for a solid 15 minutes. So let that be your rule of thumb: if you can’t see two, you’re probably off trail. Keep your eyes open and don’t head too far to the right (gaining altitude) too quickly! The trail has a few short switchbacks up through the tree clump before officially starting up to Headlee Pass. 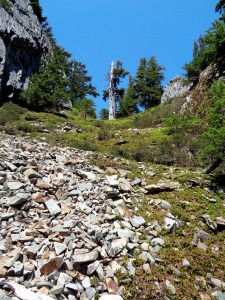 Looking up at Headlee Pass

Which is a bitch. Yeah, you heard me. Headlee Pass at noon on a brilliantly sunny summer day was brutal. More sunscreen. More water. Getting to shade was good motivation to get to the top. Shit, is my left shoulder burning? But not my right? Even those lines out, girl. And have some water. Okay, keep moving. The switchbacks get narrower and narrower until suddenly pop! You’re at the top, staring at Vesper. Shit, that’s what I’m going up? And it’s snow covered, and so much taller, and were you overconfident on this one? Let’s find out. 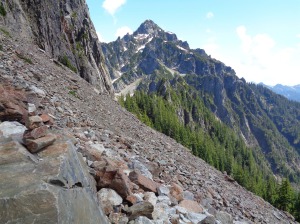 Down on the other side of the pass, you hit another talus slope, this time with a slightly more obvious trail. You almost directly cross the slope, and the next landmark is the outlet of Vesper Lake. Which I believe is actually called Lake Elan, but that seems to be an archaic name. If you’re aiming for Vesper Peak, cross the outlet stream as soon as you reach it, and continue straight up. There’s a noticeable ridge line (possibly more obvious because of melting snow), and that’s your route to the top. The trail was starting to melt out and was visible in several places, so I had that to keep me company. Again, aim for the trees. The snow had started in earnest, but once I got to the trees, much had melted out, and that section was essentially just a steep rooty trail. 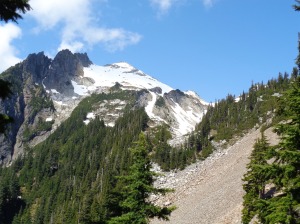 “Shit, I’m climbing THAT?” (Vesper Peak is the snowy one) 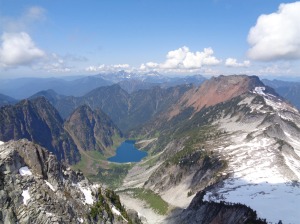 Exiting the trees, it was snowfields for the rest of the way. I put on microspikes (don’t think they made much of a difference given snow conditions) and traded pole for ice axe and started up. There were a few rocky sections open, and I trended towards those until I was maybe 200 vertical feet from the summit. At that point I traversed to the left to reach the ridge early, and then followed that back right until the peak, where I found the trail again (ha!) and could scramble to the highest point. 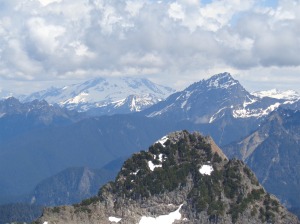 Glacier (in the clouds) and Sloan behind Morning Star

Views are amazing. I was looking across at Sperry and Morning Star, with Glacier and Baker and Shuksan in the clouds, Sloan and Gothic and Del Campo staring back at you. Even the Stuart range! I looked down and saw the itty bitty glacier I had seen from Round Lake – it was there! I almost didn’t even notice the view to the left until I glanced up by chance, only to be greeted by Copper Lake and the back of Big Four with Three Fingers and Whitehorse in the background. Damn, Vesper. And after all this time, I had been expecting you to have pretty mediocre views. 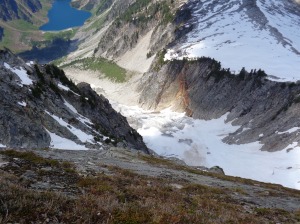 Looking down at the tiny glacier

I had snacks at the top and searched for the summit register, which I never found. Sad! After a half hour or so I started back down, which as usual went much more quickly than I expected. I passed another hiker on the way up the snowfields, so there were two of us! Back at the outlet stream, I figured it was around 3pm, so if I wanted to avoid traffic, I had to kill another hour or so. That meant either a) bag Sperry, the peak across from Vesper, or b) swim and tan. Sperry looked a little daunting for my solo-hike taste, and I figured I’d save it for a day I had company. It’s just a scramble, but I wasn’t feeling up to it. To the lake! 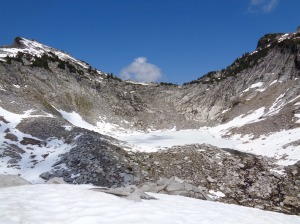 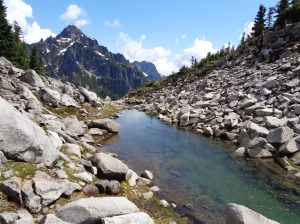 Outlet stream where I took a dip

Getting to Lake Elan is a simple scramble (if you can call it that – you’re crossing boulders, but it’s pretty flat). The lake was entirely frozen over with just the edges barely melting out, but still beautiful given the alpine backdrop. I lay on a rock for a bit, took a bunch of photos, the works. I wished I could go swimming, but the damn thing was all ice. Oh wait – the outlet stream! I ran back over to the clear half of the stream and hopped right in. Breathtakingly cold water and immediate brain freeze ensued, followed by a satisfied, refreshed feeling as I was putting my boots back on. Summer is here, guys, and every body of water is fair game. 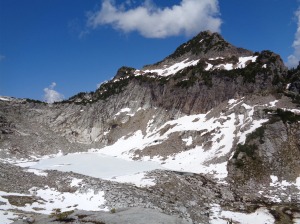 Back across the talus slopes to Headlee pass, one last look at Vesper, and then a knee-banger of a hike down. It didn’t look nearly as bad going down as it had looking up. Going back across the talus field in Wirtz Basin was easier than the way up, probably because I had more of an idea of the route than I had earlier in the day. Somehow the fern slopes were still sunny, and this time around the Stillaguamish was the most glorious river I have ever seen, full of cold revitalizing water that I could have laid in for hours after all that sun. Fewer spiderwebs on the way back. That’s right, spiders, I’m the apex predator here, you bastards. Don’t build webs on trails. They will be ruined.

Strava map can be found here, and the Summitpost page has both a map and a GPX file. I just learned that the peakbagger app can actually download GPX files and will show your position relative to the trail even in airplane mode. So for you cheap hikers out there who don’t want a legit GPS, if you aren’t doing anything too crazy I highly recommend peakbagger. It’s been a ton of fun to use. 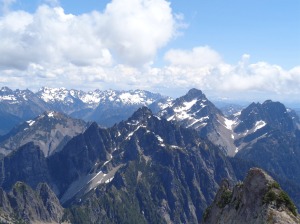