You know what sounds like a good idea? Going up to Del Campo the day after a long run, with a shitty forecast, and two friends who are in the 99th percentile when it comes to fitness. “But Eve, you hike so fast!” Shut up. My knees hurt. My ankles hurt. I have shin splints, or strained calves, or maybe just absurdly shitty circulation that gets stuck in the meat of my calves until I’m 4 miles in and sheer blood pressure has won the swelling battle and everything’s flowing again. Often my feet straight up fall asleep and it’s like walking on stumps, but that’s more when I’m running than hiking. We haven’t figured it out yet. Point is, I have issues with my calves, and those issues have been rearing their lovely heads lately.

The trail was okay

But I am easily guilt tripped, and between not having had many hikes lately and the fact I had bailed on Haley on Saturday, I couldn’t bail a SECOND time, a day later. So I said fuck it, I was in, under the condition that I got to set the pace for the first few miles because I knew I’d be slow and moderately miserable. Oh, and they put up with my moaning. “It’s definitely going to rain.” “The rock is going to be too slick to scramble.” “We’re just gonna be socked in by clouds.” “Let’s meet at 7 not 6.” “It might clear up around 2, if we start too early we’ll just never have views.” Grumpy Cat in all her glory. No, caffeine doesn’t help.

My calf forecast was accurate. The first mile to Gothic Basin (just below Del Campo) is along an old road that used to go to a mining town. That mile felt great! It was like a stretch! Hooray! But we were still socked in by clouds. And it was gross. And then it started going uphill, and my legs started whining. Whatever, they’ll loosen up eventually. At least at this point, even if the calves are on fire, I know they’ll be game in ~3-4 miles. It always happens that way.
The forest wasn’t exciting, which didn’t help. No distractions. Just an incline, and fog, with the trees dripping water on us. I had made the terrible mistake of wearing my heaviest Smartwool baselayers head to toe, only to step out of the car and into ~65 degree humid weather. And the rivers were overflowing, no rocks to hop without getting wet. In fact the entire bottom half of the trail was a river. Bring your waterproof boots. The largest crossing (towards the beginning of the hike, right after leaving the old road) can be avoided using a large log just upstream, the rest just required some extra thought and a willingness to potentially get wet. Poles help. I love my trekking poles.

Finally getting some views!

Eventually our conversation deteriorated into juicy gossip, which fueled us all the way to the basin while JT threw Snickers bars at us because we could not have been more girly. Well we could have worn all pink, but instead we were decked out in various shades of gray and black, fitting for my mood. And then I tried to bail at the basin. It was cloudy, Del Campo looked far away, my calves had loosened up and nothing was sore but everything felt like lead. Meh, I don’t need this one. I’ll take a nap. Maybe I’ll take that Snickers we kept giving back too. I’m not me when I’m hungry.

JT and Haley weren’t having it. Haley told me to shut up. JT laughed and said no you’re going to the top. I rolled my eyes and briefly considered arguing, only to immediately conclude there was no way I could win this one. Okay you assholes, grumpy cat is coming. I downed some flavor blasted goldfish and kept walking.

We headed to the right of Foggy Lake, skirting the shore. You know what’s hilarious? The first time I did Gothic Basin, I didn’t find Foggy Lake. I found a smaller tarn, called it a day, and left. I didn’t know there was a huge lake up there. But there is, and it’s gorgeous, and Del Campo actually is not too far from it at all. We realized that skirting the lake put us a tad too far southwest of the trail, and scrambled up a short schwacky hillside where we connected with a pretty clear bootpath. I started to perk up.

Scrambling to the left of the gully

The bootpath took us up to the talus field, where we could easily follow cairns to the top. You head directly up the talus field to a very obvious gulley. Instead of following the talus gulley, though, you stay to the left (otherwise you’ll cliff out) and scramble some nice juggy stair-like rocks instead. There’s got to be a word for that type of rock. Like tons of mini ledges ready for feet and hands to stick. Okay, I guess it was kind of fun. 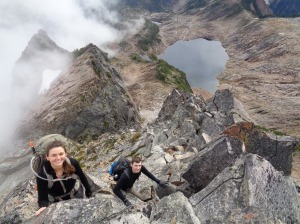 Almost at the summit, Foggy Lake below (this makes it look more exposed than it is)

When you hit the ridge, you head up and left, following the path of least resistance.There was not much exposure, and I honestly did not think any moves exceeded class 3, and even that is a generously tough rating. This cracks me up, because I had been unreasonably intimidated by Del Campo. When I first moved here, I was told Del Campo was low 5th class, easy to get off route and cliff out, and generally very difficult. That stuck with me, until finally I barfed it up as a suggestion when JT asked what we should do on Sunday. I had envisioned a thousand feet of class 3-4 rock, like the Shuksan summit pyramid, except longer, and more exposed, and with tougher route finding, and a higher probability of cliffing out. 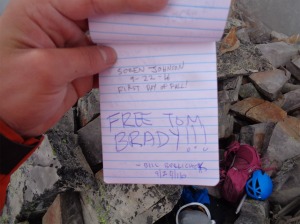 Well, it was none of those things. It’s relatively short, with an obvious route, to the point where we were 10ft below the summit and I announced “there’s no way this is the summit” because it was so underwhelming compared to my hyped up imagined version. Well, it was the summit! Woo! And we chilled there for easily two hours, snacking and reading the summit register, and watching the clouds roll in and out of the valleys and peaks around us. I found names I recognized in the register, and a plee to FREE TOM BRADY from last Sunday. To whom it may concern, he has since been freed, in an absolute crushing of the Browns, which happened while I sat upon Del Campo barely pretending to be a fan.

Clouds looked like they were officially about to roll in, so we started down. Downclimbing was quick and easy, and we found the boot path all the way back to the basin. We dropped down to Foggy Lake to take our last alpine dip of the season (it’s getting a little chilly for alpine lakes) as the sun came out for a few minutes. The basin is gorgeous, we passed a few very nice campsites and it would be a phenomenal place to camp someday. But I will say, Del Campo looks a lot better covered in snow.

Back down the talus field

One last look at the basin

The way back out was uneventful. Rivers were definitely lower than they had been on the way up, which was convenient. I was surprised to see such a big difference just over the span of a day. Del Campo is definitely worth doing – while I think the views from Vesper and Pugh are still my favorite off Mountain Loop, the scramble at the top of Del Campo was fun, and camping in the basin would be lovely.