Anita coming around a glacier boulder, Deception on the right

Hooooly crap, this was a good one. You know sometimes everything just falls into place last minute and your mildly half-assed plans actually work out? That’s what this was. Like 24 hours in advance Anita mentioned she was going to Royal Basin, which I had always wanted to do as a trail run. And some dude had done Mt. Deception earlier that week, so I knew it was in decent shape. And that would be a cool day trip too. Maybe I could run up early in the morning, meet her, and climb Deception? She was stoked when I suggested it, and I decided I’d head up late Sunday night after Marmot Pass/Buckhorn and camp with them so we could get an early start. “What are you wearing?” she asked. “Some yuppie lululemon outfit” I responded. My climbing pants have a 6″ hole in the butt [insert asshole joke]. “No, I mean for boots!” Oh, duh. A real gear question. 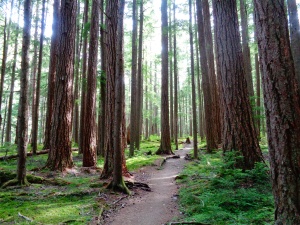 Mt. Deception is the second highest point in the Olympics, which I didn’t know until we were done climbing it. It is one of the largest piles of chossy shit I have ever had the pleasure of touching, and it was mostly covered in snow when we did it. I have strong feelings about this. I would not have enjoyed it if it hadn’t been snow covered. But snow meant some steep snow, some 3rd class scrambling, and a more mountaineery-feeling experience than had we struggled up a one-step-up-slide-half-step-back-god-damn-scree climb.

Royal Lake with mist in the morning

I was wrong on both counts. There is a Marmot Pass trail close to the Royal Basin trail, but it is not the trail I had taken to get to Marmot Pass. And as for the Royal Basin Trail once I did get there, well… the first two miles were nice soft flat easy cruising, and particularly beautiful in the dappled afternoon sunlight. But after that it’s rocky, uphill, sometimes overgrown, there are mosquitos, devil’s club, spiderwebs to fight through (you know how I feel about that – spiders fine, webs nooooo), and a surprising amount of elevation gain, though usually gradual. And carrying an overnight pack still isn’t pleasant, especially when you did a 13mi hike right before it, and I was not too enthused every time I rounded a corner only to see more uphill, or opened up the map only to see I was somehow only 500ft closer than the last time I checked. Views finally started to open up and I got glimpses of Deception. Shit, I’m going up that? It’s sooooo far.

This used to be a lake! Heading to the Upper Basin

But I was making good time, and soon enough I heard two hikers. And one voice sounded familiar. Same accent, same tone, a guy dragging behind her… that’s gotta be Anita. I jogged up to Zee and said hi, just as Anita turned around and saw me. And we had a nice running hugging reunion, we hadn’t seen each other in months and holy shit I was so happy to have company for the last mile of the hike so it wasn’t me vs. my mind for another half an hour. And it guaranteed I would find their campsite and not be walking up to random tents in the dark “are YOU Anita?” “are YOUUUU Anita?” “Is ANITA in there?” and blinding everyone with headlamps while I stumbled around exhausted about to give up (which may have happened before). 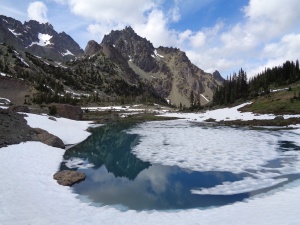 We found a great campsite just northeast of the lake. I crashed in my bivvy almost immediately (after panicking at two things: the recently updated forecast, which showed overnight showers – not great for a non-waterproof bivvy and down sleeping bag and the bear poop like 15ft away and I was between the poop and Anita’s tent, aka I’d be the first bear burrito that evening should the bears decide we smelled delicious). Eventually it didn’t matter because I was unconscious by like 8:30pm and if it did rain, I didn’t even notice.

We got moving around 8am. There is the alpine start (the offensively wee hours of the morn), the Anita start (mid hours of the morn but as late as possible), and the bonfire start (>11am). So 8 wasn’t ideal knowing we’d be slow, but I figured if we moved steadily we’d be fine. And it was partially on me and the fact it took me 20 freaking minutes to find the stupid pit toilets. Zee turned around on the way to the upper basin, and Anita and I continued. The basin is spectacular, almost like Enchantments lite. I can see why the permits are so competitive. That’s another thing, I got SO lucky. Anita had been fighting for permits for years, and here I am mooching off her hard work. And the main attraction over the basin is Deception towering over some small glacier tarns below a dying glacier. At the base of the slopes, we decided to take a rising traverse rather than risk the rockfall on the more direct route, so we started kicking steps uphill. And so it would be for the next few hours.

Anita on the way up

There were a few scree sections (“ugh, should I remove my crampons?” “Nope, back on snow in 50ft!”) a few loose third class scramble sections (“can i take my crampons off?” “No, back on snow in 20 ft!”) some steep snow (PERFECT conditions for bucket steps and a nicely plunged ice axe) some moats (there’s no way for them to not be awkward, would it help if we took off our crampons?) and a little more kitty litter scrambling (“can I take off my-” “no”) and we finally topped out at the col, marked with a stick to help differentiate from the myriad of other similar cols.

Here’s where the route was longer than expected. We dropped down some talus (loose, because this mountain is a crumbling POS, we’ve been over this) onto another dying glacier and traversed to the back ridge, where “can I take off my crampons” was finally answered with a resounding “YES!” and we rejoiced in the feeling of boot sole on rock instead of scraping metal. We traversed to a third ridge, which was a perfectly straight talus walk on top of the world followed by a short step of near vertical snow and a final talus walk (i’m so done with talus by this point) to the summit, where we sang and hollered and waved at Zee and marveled at the views. It truly was incredible. Long day of uphill, but high reward with the gorgeous scenery up there.

But we had to descend all of the shit we had come up. Getting back off the upper talus section was easy. Crossing the glacier on the north side was easy. Getting back up to the stick-marked col was easy. Then we had the only tricky part to contend with: downclimbing a few sections of pretty steep snow. Maybe 50 degrees. Face in, kick steps downclimbing. I kicked enormous steps for Anita, and luckily some cloud cover meant the snow wasn’t total slush. We actually made surprisingly good time, and these are the parts of climbs that are so singular, so focused, that everything else goes away. I had lingering stress from my old job and nerves around starting a new one, nerves around fitness after working weekends for so long, none of that matters when you’re on terrain like this. 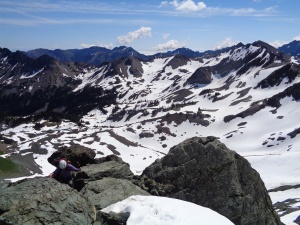 We even skirted most of the 3rd class scramble, with one awkward 4th class step either on a thin downward sloping slab or to hop across a moat back onto snow (pick your poison, I do think Anita’s route across the moat was better but I thought it looked sketchy from up high). From there, we cruised plunge stepping down moderate snow the entire way back to the basin after a short scree field! It was amazing! We found yaktrax prints at the bottom, I said I hope that’s Zee. Despite turning around earlier, it turned out he had rethought (almost went with “rethunk”) his decision, and gave it another shot. And I’m glad he did, the upper basin was phenomenal. We soon found goat hoof prints perfectly inside of the yak trax. They continued for maybe a mile, until we eventually found Zee, hiding in a patch of bushes from the goat that had been stalking him for literal hours. He did get an incredible picture when the goat got too close for comfort. 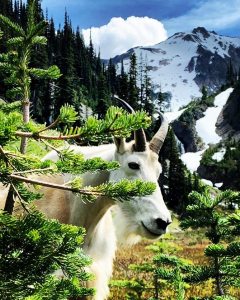 Coming across the north face

We made it back to camp around 4. Zee went to get water (THANK YOU! I was so tired I did not want to do camp chores) while Anita and I changed our shoes and laid around a groaned. When Zee hadn’t returned for 20 minutes, we started wondering what was up. Should we be worried? Is he taking a nap? Maybe we should go look. And then we saw Mr. Billy Goat walk across the trail again, slowly, starting at us. “Zee, the goat is back!” Anita shouted. And then we hear Zee’s deep grumbly voice. “…I know.” We burst out laughing. He couldn’t get away. It’s okay, Mr. Goat will be extradited to the Cascades any day now if he hasn’t been helo-dropped there already.

Anita coming along the final ridge

I hung out until 5, and then packed up my bags to start the slog back to the car. Anita gave me a brownie for the way out (THANK YOU! For feeding me! Everyone fed me this weekend!) and I started on my way, where I was immediately blocked by Mr. Goat. God. Dammit. I tossed a rock and whined. I just wanna go hooooome mr goat pleeeease let me pass! He eventually ambled over to the side of the trail and I darted past. Anita made a bet that I’d be back at the car by 7:30. I thought 8. But she had given me a goal, and I made it back at exactly 7:30. Even took a selfie to prove it.

One last push to the top! Mystery in the background

Huuuuuge thanks to Anita and Zee for adding me to their Olympics permit at the last minute, and to Ranger Scott for all of the phone calls trying to get my name on there (and my payment). Seriously amazing trip, and another data point that the Olympics are far more beautiful than I ever give them credit for. And I was the perfect amount of wrecked when I woke up back in Seattle on Tuesday. Just in time for a shit ton of programming homework that I had procrastinated on. Woohoo!

P.S. This would be a sweet trail run (maybe minus the chossy shit, like we discussed above. Wait for snow).

Olympus way in the distance, the highest point in the Olympics