Glacier Peak in the distance

Given the success of my hike the prior day, I figured I wanted one last easy alpine trip before calling it winter. Many of you know that when I first moved here and had no job and no friends and no family and nothing to do, I started hiking. That meant my hours of sitting were spend on WTA, learning everything I could about trails, discovering new areas, new views, new peaks (I didn’t know what Adams was!), new lakes (Lake Ingalls? Mind = blown), new adventures. So I started listing all of the hikes I wanted to do in a word doc. They were in order of driving distance, with notes like “this would be a good trail run” and “leave this for when you have more mountaineering experience” and “has lakes and rivers so good for cloudy days!” Many of them I have now knocked off as approaches to climbs, like Lake Ann or Heliotrope Ridge. But some are standalone hikes, and still deserve their own recognition. One of those on the list was Green Mountain Lookout. Finally hiked 10/29/2017! 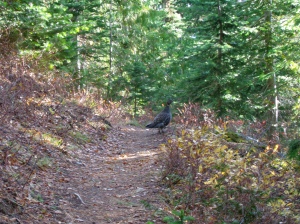 Fat grouse. Come be my dinner

My original hiking partner’s social life got a little out of hand, so I found myself waking up at 5am to go hike solo, which was actually fine by me since I needed the head space anyway. Green Mountain it was! Basically I drove like 6+ hours round trip just to hike for 3 but whatever, gotta get out. The Suiattle River Road sounds nice, but is actually a million miles of terrible washboard gravel road and it was a relief to get onto the Green Mountain turnoff, where the road became just rocky and not washboard. My car is awesome, but washboard absolutely destroys me. Apparently the term is “crabbing” where the car just skids sideways and it feels like the entire frame is shaking violently and falling to pieces. Potholes, get at me, rocks, you are my bitches, snow, meet my European mountain-snow-rated tires. Washboard…. ah, crap.

After an eternity of skull-chattering road I parked next to the lone pickup at the trailhead, wolfed down a ton of peanuts, and started up. I had brought my hiking boots instead of trail runners expecting a bit of snow, and I wish I had brought trail runners. I did leave the axe and crampons in the car, so I didn’t look as foolish as the last trip.

The trail through the forest is a spectacularly smooth soft dirt trail and the elevation gain is quite mellow, or felt mellow compared to Sourdough the day before. The air smells wonderful, which I thought was a one-time thing when I was at Downey Creek back in June since it had been so long since I had been to mountains but I guess it’s just delicious regardless. And you aren’t even in the forest that long! After 1.5 miles you break out onto meadows slopes that dip in and out of trees, and I imagine they’re vividly green in the summer because the slopes were covered in ferns. But this time of year, it should be called Patchy-Red-And-Brown-Mountain, because there was no green to be seen.

I trekked up through dead and dying ferns, with occasional bursts of yellow and red foliage. The first slopes you see are not the slopes to the summit, but a lower-lying winding ridge that you could follow to the top if you so desired. But there was no snow, so I stuck with the summer trail. It wound past a small lake that had started to freeze over, which is where you get your first views of the lookout. And – blueberries!! It’s the end of October and there are freaking blueberries! They were mostly overripe, but there were a few gems in there. I alternated snapping pictures and stuffing my face. Glacier Peak hovers over you to the east for the entire hike, and Sloan, Pugh, and White Chuck decorate the horizon south and west. Pretty cool being able to say you’ve been up those (with the exception of White Chuck). 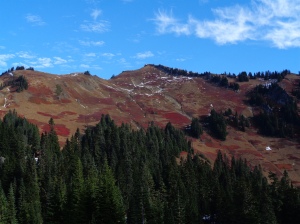 First glimpse of the lookout (center)

The trail traverses the slope beneath the lookout and then continues its switchback pattern beyond the basin, up and up to the ridge east of the lookout. You finally top out to spectacular views of the Downey Creek drainage, where my Patagonia jacket lies in a nest for whatever wild animal found it back in June. RIP. Dome looms massively one ridge over, and you can see all of the peaks of the Ptarmigan Traverse and the lesser known Buckindy Traverse (shh, don’t tell anyone about that one). The final hike to the lookout ends in what is remarkably similar to a sidewalk, except in the sky. It was windy, so I dropped my pack and huddled on the sheltered side of the lookout drinking in views of Snowking and Mt. Chaval, two peaks that are probably underrated just because you can’t see them from any major highways.

I whipped out my peakfinder app to confirm it was Mt. Chaval, and it turned out I had cell service, so I made sure to whine to everyone in the city about how I had forgotten my peanut butter snack and was stuck with salami and cheese. A lone female trail runner caught up to me and took a break by the lookout just as I started to head down, and a few minutes later I ran past yet another solo female hiker on her way up. Ladies, represent!! I hear so many people panicking about women hiking alone, or being concerned that I’m hiking alone, or being surprised to see me on the trail hiking alone, I get pumped when I see others. It’s normal, guys. I used to be scared of people on the trails and on the forest roads leading to the trails but it turns out it’s just a bunch of other Eves. Get out and enjoy the world, there’s so much to see! 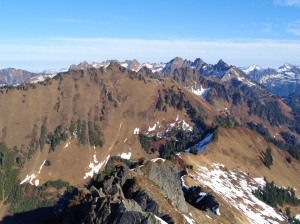 Buckindy group beyond the first ridge

I was back at the car about an hour after leaving the top, which was almost a bummer because it was such a beautiful day. I always feel like I wasted a day if I’m back before te sun sets. Should have traversed the ridges, or chosen a longer hike. But it was awesome to finally get to see something that’s been on the list since 3 years ago when hikes like Snow Lake or Kendall Katwalk blew my mind. You need to get back to your roots and remember why you hike, or why you climb, and I’ve spent a few months doing exactly that. It’s been a long time since I was excited for every corner, for every switchback, for every patch of color and every view even if it’s a view I’ve seen a million times. And that’s how the past few trips have been.

Looking back along the ridge from just below the lookout