Monte Cristo group from the shoulder of Sloan

This is Sloan. That’s the glacier crossing. Taken from Northwest Blazer, another awesome blog for the area.

Not to be confused with the equally beautiful woman from Entourage, Sloan is a peak off the Mountain Loop Highway with a striking silhouette from almost any direction. I’ve done hikes where every single person one at a time asks “what’s that one?!” and the answer is usually Sloan. So it had been on the radar for years, but tends to get very broken up as soon as weather warms up. Since it’s usually a day trip, it’s easily overlooked as a weekend destination. Luckily this year has had a fantastically long glacier season, and Sloan by some miracle was still in pretty damn good shape, and I haven’t been dedicating every weekend to crazy 48hr trips this summer. Our friends Lena and Steven had gone the prior weekend, so we knew we’d have a shot this weekend, and wanted to get it done before it was too late. Hiked (climbed?) 8/19/2017.

Sulphur Shelf aka Chicken of the Woods (tastes like chicken! I wish I had known when I saw them!)

Anyone who knows me knows I’m terribly at dedicating future weekends to anything. I fret when all of my weekends are booked. It is arguably one of the largest sources of stress in my obviously charmed life (for example, I only have two open weekends in September and have been panicking for days). So Rob asked if I wanted to climb Sloan, and a few others pitched their own ideas, and in classic asshole Eve fashion I ignored everyone who pitched plans to me and simmered in my analysis paralysis until I woke up Friday morning and said Eve, if you don’t make a damn decision now you’re going to end up not doing anything this weekend. So I messaged Rob. If you’re still down for Sloan I’m in. And luckily, he was, and so was Jennifer, an awesome woman I hadn’t met yet. But I trust Rob’s taste in people. 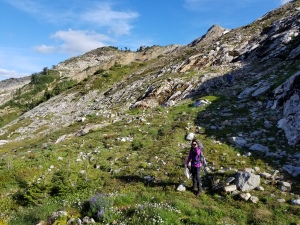 We met at 6am at the Green Lake Park n Ride. Last time I was at this park n ride I was dumped (this was in 2016) for saying “god dammit” a few too many times (he didn’t read my blog apparently), so it was nice to override that memory with a way more awesome one. We piled into Rob’s Subaru and hauled off toward Darrington. We were aiming for the Bedal Creek approach, not the standard route via Cougar Creek which is longer (12mi round trip, 800 more ft of gain) with some river fords (along with being crass, I’m also lazy).

Google Maps led us slightly astray. I know Steven and Lena (who provided beta, here’s Steven’s blog) had only checked the GPS like twice the entire trip, and there we were checking it while still on the road to make sure we found the trailhead. Well we did, after some bumps and some scrapes and some bottoming out on the road. Any high clearance vehicle will be fine. Rob’s car was a trooper.

Scrambling towards a moody Sloan

We started off down the abandoned road, and crossed a river where the trail fizzled into nothing. Check GPS. Off track already. Shit. Backtrack. Get to a campsite, take off through the woods, trail fizzles into nothing. What?! Pay attention! Backtrack down the abandoned road, realize the Bedal Creek trail is actually off the road to the North, shwhack through some bushes, and pop you’re on the trail. Okay, NOW we’re off. So in the first 45 minutes, we’ve used the GPS like 20 times. Dammit Steven. 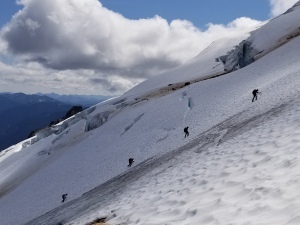 Robert’s team coming up the glacier

The Bedal Creek Trail is fast easy moving besides some overgrown brush that’ll get you nice and wet. There’s an orange blaze marking the turnoff about 1.5 miles in, and from there just follow blazes heading up and slightly right through mostly open forest. Not a big deal if you get off track. There are wasp nests all over the ground, so be careful. I fell victim first. Two stabs to the leg, ah shit!! Run! 15 minutes later staring at some paper on the ground, “wow, that looks like a wasp nest!” I looked at Jennifer, who was staring at me slack jawed obviously thinking “how can she be such an idiot.” Realization crossed my face. Bail! Too late, that was three stings later. My poor ankles. 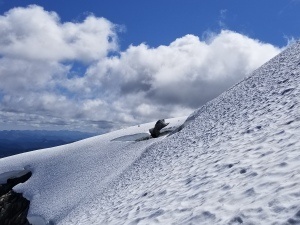 One got Jennifer on the hand, Rob was spared. But he had a wasp sting the inside of his mouth the prior week, so I guess we’ll let that pass. At the top of the forest, we made the mistake of trending hard right too soon. You should keep going up until you hit a rock wall, and then head hard right (like a literal 90 degree turn). There’s a boot path through all the brush. We did not find the boot path, and lost probably 45+ minutes schwacking up through blueberries following interesting poops (thank you, bear) until we found the boot path. From here you go through patchy open forest (Rob got stabbed in the head by a rogue branch) until you cross the saddle, and woohoo you’re in the alpine!

Two options here, stay around your elevation and don’t head up until you hit the ridge on the skyline, or head up as you traverse (in which case you’ll end up crossing a short patch of steep snow) along slabby rock and streams. There are several camp/bivvy options at the saddle and beyond, and this really would make a very pleasant two day trip. Once we hit the glacier we scrambled up as far as we could before putting glacier gear on. We saw another team on their way up, and it turned out Rob knew the team leader! It was the guy Rob had previously attempted Sloan with, but they had to turn around!

We caught up to their team, traversing across the highest section of glacier we could reach, and all crossed the snowbridge. You could do a snow traverse below the snowbridge if necessary, but the snowbridge was stable for the time being. Beyond the snowbridge it was an easy 10 minutes to the ridge where you begin the corkscrew scramble part of the route.

On that right, views of the Monte Cristos (another range I apparently underestimated) open up. Spectacular. The corkscrew route tours nearly every side of the mountain, so you go from snowy rocky peaks to deep green valleys and rivers. Glacier Peak stayed in the clouds (that bum) but damn, this is an unbelievable area. The scramble is pretty clear, there’s a boot path through the alpine meadowy sections and the rock on the 3rd class parts is fairly well traveled. I think it’s fairly rare seeing this sort of high alpine boot path. Usually once you’re up high it’s rocky, or all scrambles. Pugh has trails like this towards the top (my favorite hike/light scramble off Mountain Loop). 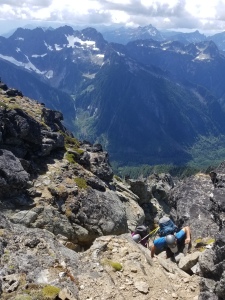 Rob on one of the few 3rd class moves

At one point there’s a lightly colored gully you scramble up. When you get to the top, keep going up to the ridge, don’t go hard left or you’ll be off track (though you’ll see the path behind you and feel dumb dropping elevation to get back to it). If you get off route you might end up pulling a 4th class move here and there, which is where I messed up my previously injured arm (I tweaked it driving, shut up, it was an aggressive and awkward right turn). Okay, so my left arm was rendered useless. Whatever, we’re 50ft from the top and I can butt-scoot everything on the way down.

We topped out to an old school brass summit register with several familiar names. Rob brought curry and wraps which were amazingly delicious and I took someone else’s advil because I left mine at the car (crass, lazy, and a glutton). Rob got to summit with his original climbing partner, which still cracks me up. We snapped a bunch of summit photos after our snacks and headed back down since it was a bit breezy up there and I was getting cold.

Jennifer enjoying the views with her sweet sun hat

Back across the short snow slope

Descending was way faster than I thought. The scramble was quick (careful not to knock rocks down the gully), and we roped up at the edge of the glacier where we had stashed our glacier gear. We went all the way to the toe of the glacier so we didn’t have to scramble down the rocks we had climbed up (plunge stepping down snow is faster), and backtracked the same way across the slabs and meadows as we had taken up, steep snow traverse included. Downwards traverses on steep snow are so annoying. 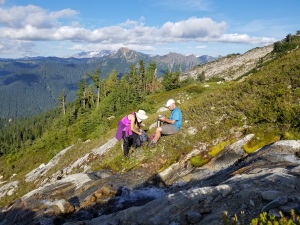 No giardia for these guys

We cruised across the meadows, stopped again for water, and soon enough were back at the blueberry brush traverse. Jennifer had an AWESOME filter that I need to get – a Katadyn water bottle (it’s on sale!! Hurry!) that squeeze filters a liter of water surprisingly quickly. We followed the boot path most of the way through the brush this time, though lost it descending in the trees. If you follow the boot path as far as it goes, there’s a small talus ish field below you, which we crossed and then entered the woods. The forest opens quickly, and descending is very quick since it’s all soft dirt and the blazes are (for the most part) easy to spot. Rob finally got stung by a wasp halfway down, near where we had been stung. Now we’re all even.

Dappled sunlight through the trees

We were back at the trail way faster than I expected, and made it back to the car probably 30 minutes later where we all relished changing into flip flops and enjoying the smell of crisp pines and the dappled sunlight streaming through the trees (that’s the best part of forests). This had been an awesome day trip. Totally doable in a day. We took a little under 12 hours, and we had been going a pretty casual pace, especially on the way up because I felt like shit for the first few hours). Not to mention the probable 2 hours we lost between taking the wrong trails in the beginning and then fighting uphill through blueberry bushes (yes we stopped to eat some too). Honestly, this whole trip was so surprisingly to me. I had been saving Sloan for “a lazy day,” not expecting anything mind blowing, but it’s just a pleasant mix of open forest, alpine meadows and slabs, glacier crossing, and 3rd class scramble with great views. It’s a big climb packed into a small package. And Sloan is always the one that people ask about when they see it from other peaks, because it looks so neat. “The Matterhorn of the Cascades.” So not only does Rob have good taste in people, he has good taste in climbs. 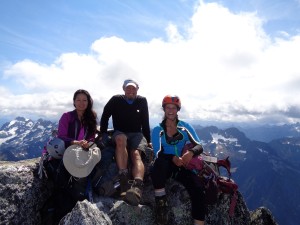